The importance of old trees and dead wood IN the forest

Forest biodiversity is made up of a myriel of different ecosystems, although humans have, since the dawn of time, managed forests according to their needs. Forest cover has been increasing in recent years, but what about the naturality of these new forests?

As we know, forest monocultures continue to weaken our forests, a specific diversity is needed for their balance, as is the conservation of old trees and dead wood. It is on this last point that we will focus our article and the one that will follow next month.

As a result, trees do not reach an ageing stage; they are cut down as soon as they can be used for construction or heating, even though they are essential for the health of the forests. Without them, the latter are impoverished and become vulnerable to climatic hazards and lose much in terms of biodiversity. 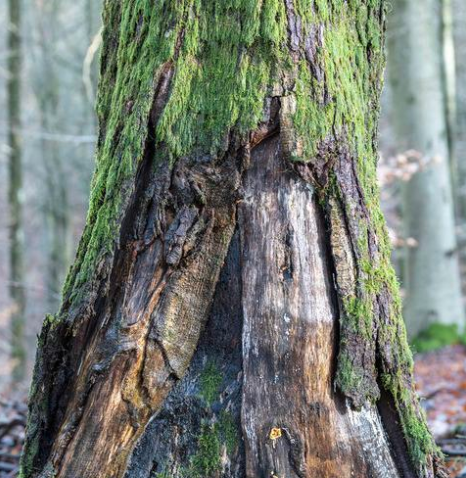 In fact, trees become more hospitable as they age, providing shelter and food to many species thanks to the asperities that have been created throughout the life of the tree. In Europe, these species account for a quarter of the biodiversity of natural deciduous forests.

There are several categories of trees described as "old": trees with cavities due to wood decomposition and wood-drilling, live trees with dead parts, and standing dead trees.?

These "tree habitats" are appreciated by cavicultural birds: 41% of the 68 species of birds exclusively forest depend closely on cavities present on old trees or on dead trees for breeding.

Primary caviculture species develop their own cavities in the tree, while secondary cavities require cavities that already exist. The so-called primary species, mainly woodpeckers, nest and feed there (in winter 97% of their food is made up of dead wood insects). The black woodpecker excavates large boxes in beech trees over 100 years old, which will largely be used for secondary caviculture. The latter may be other birds (tits, fly gobs, red-tails, owls, etc.) But also mammals: 33 of the 91 species that inhabit the forests are dependent on tree microhabitats (these are the different small habitats that exist on trees: cavities, outgrowths, wood wounds, etc.).? . These mammals: lerot, squirrel, gene, marten, weasel or bats, decline if the number of shelters present is not sufficient. Bats are the most subservient mammals to dead trees, especially many species of moth (de Leisler or Commune).

These old trees are also refuges for insects such as ants, bees, hornets, or wasps.

Mushrooms are among the first to attack dead wood. They are xylophagous organisms: they have the ability to assimilate and digest the cellulose and lignin of which wood is composed.