Jaju first took formal lessons of astronomy at the Jyotirvidya Parisanstha (JVP), India’s oldest amateur Astro club in Pune, three years ago. But little did Jaju know that one day a moon’s image he captured would go viral and win him laurels.

What started off as a mere hobby and interest for space after watching Star Wars and similar space-based fiction movies, astro-photography for Jaju is now turning to be a full-time love.

The nationwide lockdown last year clashed with his class X preparations and could not venture outdoors. When he got his chance finally early this month, he made the most of it and the result was an image that changed his life for the better.

“My initial plan was to capture the moon in November last year, but studies and board exams kept me occupied. In May, I finally managed to set up the camera and telescope and shoot during the wee hours of May 3,” said the student of Vidya Bhavan High School in Pune.

On the viral image and the efforts in capturing the moon from every possible corner, Jaju said, “I used JVP’s telescope and shot some 38 videos featuring as many craters and every inch of the moon’s surface, as if taking its panoramic shot. Each of these videos had some 2,000 frames. Finally, 50,000 images were shortlisted and stitched together into one image. The colour variations in shades of blue and orange too were captured, which showcases the numerous mineral compositions on the lunar surface.” 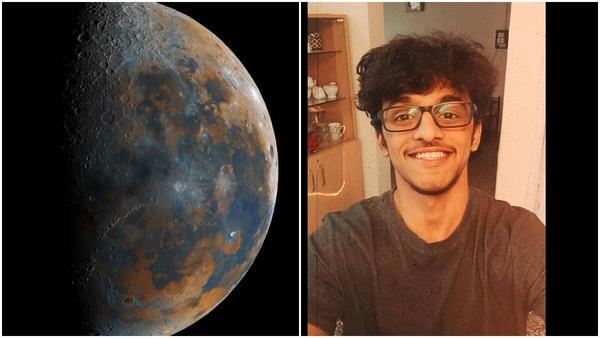 Astronomy is a vast subject but one thing that astro-photography has taught this 16-year-old, he says, is patience.

“I think I have more patience now than I did in the past and I was more focused to capture the right moments, handle and process volumes of data images,” he added.

For the moon image, posted on Reddit and on personal Instagram accounts, the youngster handled images and videos amounting to 186GB which he took about 40 hours to process into one image.

“I often interact with them online and seek suggestions and often get tips to improve myself professionally,” said Jaju, who is one of the young volunteers at JVP which owns over 10 telescopes ranging from 4 inch to 11 inch in size.

Aniruddha Deshpande, co-head at JVP, said, “An image with this level of detailing being captured by a non-professional photographer and an amateur astronomer is commendable.”

Light pollution in big cities, Jaju shares, is one of the biggest challenges that prevent photographers from getting the best views of night skies. And he realized it after visiting the Spiti valley in Himachal Pradesh in 2018.

“The Himalayas are among the few and best locations to shoot stars and the galaxies. Out there, it is hard to find dark patches and the sky is full of bright stars everywhere,” shared Jaju, who plans to pursue a career in Astronomy, hone his night-photography skills, shoot nebulae and galaxies in future.