How will countries and leaders react to the increasing worries about our climate? We look at different trends and the expected investments to be allocated towards healing the planet.

Nathaniel Bullard is Bloomberg NEF’s Chief Content Officer and as part of providing strategic research on the pathways for the power, transport, industry, buildings, and agriculture sectors to adapt to the energy transition, he analyzed the following green energy trends.

Sustainable debt products such as loans and bonds targeted to positive environmental investment only emerged as an instrument class eight years ago. Since then, issuance has skyrocketed, exceeding $750 million in 2020. The world reached its first-ever year of $1 trillion of sustainable debt issuance in September 2021. 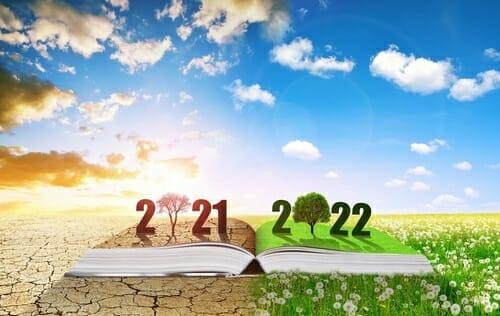 From a climate perspective, nuclear and renewables are not in competition. There will be enough growth in electricity demand to support significant expansion of every zero-carbon power generation technology. Some of that expansion could even come from fusion, as the investors who recently placed $1.8 billion into Commonwealth Fusion Systems hope.

In the first quarter of 2010, 395 electric vehicles total were sold worldwide. In Q3 2021, 1.7 million were sold, of which more than half were in Asia. That sales growth has taken EVs from 0.002% of passenger car sales to 10.8% of sales globally, and more than that in both Europe and Asia.

Other climate trends to watch

Some of the key things to watch out for in 2022 that could influence the state of the climate crisis and the direction the planet is taking.

But 2022 could be the year that changes. At COP26 the discussion around loss and damage gained momentum and Scotland became the first country to contribute (around $2.74 million) to loss and damage funding for developing countries. There is hope that COP27 being held on African soil, a continent experiencing some of the worst impacts of the crisis, will mean a stronger push to address loss and damage.

Global heating is increasing the severity and frequency of extreme weather events and vulnerable countries do not have the capacities and finance to mitigate and adapt to these impacts. In 2009, high-income countries that have historically produced the most emissions, committed to providing $100 billion of climate finance annually by 2020 to help developing countries deal with the impacts of the climate crisis. But this climate finance target was not met in 2020, nor in 2021.

The UN Secretary-General António Guterres has called for 50% of climate funding to be spent on climate change adaptation, which currently accounts for only 25% of global climate finance. Commitments have been made for adaptation finance to increase to 40% by 2025.

This year will see the release of two major scientific reports. The Intergovernmental Panel on Climate Change (IPCC) published a report in 2021 that gave the world a stark warning that the average global temperature rise will hit 1.5°C before 2040 and could reach 5.7°C by 2100.

In February 2022, the IPCC will release an assessment on how the climate crisis is affecting people, ecosystems, and biodiversity, our capacity to cope, and how we can adapt.

In May 2022, the Government of Indonesia will host the 2022 Global Platform for Disaster Risk Reduction. Countries will discuss how to build stronger systems to manage disaster risks and protect those in harm’s way. With climate hazards accounting for 90% of all major disasters worldwide, disaster risk reduction policies and practices are a crucial element for the effective management of the climate crisis.

Egypt hosts the next UN Climate Change Conference (COP27) in Sharm el-Sheikh in November 2022. The conference will build on commitments and discussions from COP26 in Glasgow, UK. Key things to look out for in the run up to and at COP27 are: