PORTSMOUTH — Great Bay Community College celebrated its 76th commencement outdoors on its Portsmouth campus. Unlike the previous year, where multiple smaller ceremonies had to be held to accommodate spacing restrictions due to the pandemic, the college was able to hold one event for all graduates on Saturday.

Great Bay conferred over 300 degrees or certificates during the weekend festivities.

The college began in 1945 as the State Trade School at Portsmouth and has become one of northern New England’s leading two-year institutions of higher learning, offering over 50 degree and certificate programs in the sciences, technical studies, and liberal arts while serving as an educational and career hub for students, businesses, and the community.

Recently appointed president, Dr. Cheryl Lesser, welcomed the class of 2022 and crowd of close to one thousand family and friends on hand to cheer on the graduates.

“I have come to recognize in just six weeks at Great Bay, that students, faculty, and staff are passionate and compassionate people. They have shown strength, resilience, and intelligence to meet challenges in our classes, our community and in the world. The Great Bay community committed itself to provide the path for our students to achieve excellence and be prepared for the world beyond our doors. This is the mission of GBCC, to prepare students to meet life’s challenges at all levels and our hopes are that they become, that you become, partners with us, with your communities and beyond to improve and ensure that we all thrive into the future.”

Distinguished members of the College Community and honored guests represented on the platform included Dr. Mark Rubinstein, chancellor of the Community College System of NH (CCSNH), Dr. Cathryn Addy, GBCC interim president from August 2019 to March of this year, Christine Strong, chair of the GBCC Advisory Board, Hollie Noveletsky, Sharon Harris, and Steven Slovenski, members of the Board of Trustees for CCSNH, Tina Favara, VP of Student Success & Enrollment Management and Lisa McCurley, VP of Academic Affairs for Great Bay. 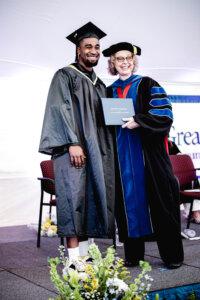 Maine resident Dr. Elizabeth McLellan, a global leader in nursing and healthcare administration and president and founder of Maine-based Partners for World Health, was the keynote speaker at the ceremony.In her address, she shared details of her many travels to Bangladesh, over 30 years for her career where she witnessed poverty, homelessness, malnutrition, and a specific woman, “homeless, nameless, faceless and voiceless” who became her inspiration.

The President’s Award for Outstanding Student was presented to: Samantha Coombs-Pierce. The award is given to a member of the college community whose endeavors have made a significant difference at the college.

The President'ss Award for Special Contributions was presented to Dr. Cathryn Addy who served as Interim President at GBCC from August 2019 to March 22, 2022.

The Class of 2022 Student Speaker was Brigid Emma Murphy, graduating with an associate in arts degree in psychology. She shared her story of being discouraged from going to a community college after high school by a guidance counselor and instead, deciding toattend a state college. While there, Murphy discovered that she was suffering from undiagnosed depression and anxiety. With little support available to her at the College, she dropped out assuming a degree was not in her future. Later, after being inspired by an aunt who recently received a degree, she started at age 24 at Great Bay.

“I told myself that community college would be 'good enough,'” she said, “But I was, frankly, shocked to find that I was challenged here. It was far from the easy ride I had anticipated, and I loved it. I felt like I was getting the 'real' college experience, and I soon realized I was exactly where I was supposed to be.”

"The biggest difference between Great Bay and other colleges,” Murphy continued, “is not the lower tuition, the smaller class sizes, the incredible work of the staff members, or the welcoming atmosphere of the students. What really makes Great Bay stand out is the way they believe in us."