MEDIA, Pa. — Young men in jackets and ties walk along tidy walkways that connect the redbrick buildings of the 220-acre campus of Williamson College of the Trades.

They wake up around 6 each morning, turn out for inspection, attend a morning assembly, then spend full days doing coursework and in shop, alternating at chores in the kitchen and tending the buildings and grounds. Lights out is strictly at 10:30 p.m.

The college was established in 1888 by a wealthy but frugal dry-goods merchant to train young men as blacksmiths, bricklayers, harness-makers, wheelwrights and other kinds of tradesmen “so they may be able to support themselves by the labor of their own hands.”

Now, its original endowment having grown to $128 million, it enrolls approximately 265 mostly low-income men who spend three years, at no cost to themselves, earning associate’s degrees in subjects including carpentry, masonry, machine tooling and power-plant technology.

“It’s old-school,” said Michael Rounds, Williamson’s president, acknowledging that it’s a throwback, vastly different from the community colleges and union apprenticeships in which many people today get training to enter these extremely high-demand fields.

But education for the skilled trades appears to be returning to fashion, according to enrollment trends, survey data and other signals.

“If you look at where the jobs are, the sweet spot is an associate’s degree with a focus on the trades,” said Rounds, a former Army lieutenant colonel whose desk faces a portrait of the school’s benefactor Isaiah Vansant Williamson.

One trend reviving interest in education in the trades appears to be growing doubt among high school students and those changing careers about the value of a four-year college degree. The proportion of high-schoolers who are considering a four-year education has plummeted from 71 percent to 48 percent since the start of coronavirus pandemic, according to a survey by the ECMC Group, a nonprofit student loan guaranty agency that also operates career schools.

They borrowed money to pay for college. Here’s what they would change about student loans.

“That was something that was gaining momentum and traction even before the pandemic,” said ECMC Group president and CEO Jeremy Wheaton. (ECMC’s philanthropic arm, the ECMC Foundation, is among the funders of The Hechinger Report.)

Meanwhile, Americans can see firsthand the labor shortages in fields such as construction, transportation and logistics, along with rising pay for those kinds of jobs and the lower debt and shorter timetables needed to train for them. 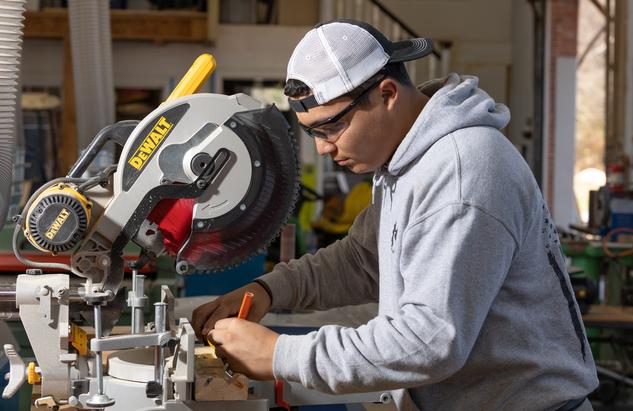 “Especially with the younger generation, time matters. Money matters, but time matters as well,” said Chad Wilson, superintendent at the East Valley Institute of Technology in Arizona, or EVIT.

“These are deemed critical infrastructure,” said Mike Pressendo, chief marketing and strategy officer at the TechForce Foundation, which encourages students to become transportation technicians. And now, he said, “employers are sweetening the packages” for recruits, with higher pay, better benefits, tool allowances and signing bonuses.

At a job fair at Williamson in November, 114 employers attended, outnumbering the graduating seniors.

Outside Rounds’s office window, a $21.2 million student center and a new dorm are under construction, both in anticipation of a planned increase in enrollment.

The number of people seeking education and training for the skilled trades is also up elsewhere.

In Utah, enrollment rose in the fall at seven of the state’s eight technical colleges. South Dakota’s Lake Area Technical College saw an 8.1 percent increase in first-year students over the previous year. The number of people training for the trades at Georgia Piedmont Technical College rose 13 percent in fall 2021 from the previous fall, the college said.

Postsecondary enrollment at EVIT is up 54 percent since 2018. And the career colleges run by ECMC Group, in Georgia, Florida and Texas, reported a collective 20 percent increase in the number of students last year and 16 percent this year.

Those figures are particularly noteworthy against the backdrop of a nearly 8 percent decline in overall undergraduate college and university enrollment in the past two years, according to the National Student Clearinghouse Research Center.

Williamson student David McCann took college courses while in high school and went to a community college for a while after that, paying out of pocket to avoid student loan debt. But “it would have taken such a long time to get a degree. It wasn’t worth it,” he decided.

Classmate Shamar Kerr, who is learning how to service boilers, interned during the summer at a nuclear power plant.

High schools like his, Kerr said, “try to push you to universities.” But he “didn’t like the idea of learning academic-type stuff that I didn’t think I was going to use.”

Parents encourage four-year college educations, too. In Aaron Tallman’s hometown in the coal-mining region of Pennsylvania’s Schuylkill County, “there was always a ‘You should do better than we did’ mentality.” But “why would I take the four years and go into a field I don’t know anything about, spend the money, spend the time, to go into something where there’s not even any demand?” asked Tallman, who is studying machine tooling at Williamson.

There’s still broad antipathy among many prospective students toward working in the skilled trades.

In a pre-pandemic survey by the metals supplier Metal Supermarkets, half of Americans ages 18 to 24 said they would rather work as baristas than as welders. In another survey, by the large equipment rental company BigRentz, only 11 percent of 18-to-24-year-olds queried said they believed that training in the skilled trades led to high-paying jobs.

But those opinions have begun to shift. When BigRentz asked the same question after the pandemic started, the proportion of respondents who thought jobs in the trades paid well had risen to 16 percent; 33 percent said they thought trade school had become a better option than a more conventional college education, while 30 percent said it was more likely to lead to a job.

More than half of the high school students in the ECMC Group survey said they thought they could succeed with postsecondary educations of three years or less.

Many of them can. People with bachelor’s degrees still earn more and are less likely to be unemployed than people without them, according to the Bureau of Labor Statistics. But the number of jobs with median pay of $55,000 a year or more that don’t require a four-year university degree has been rising in about half of the 50 states, including in fields such as construction, according to the Georgetown University Center on Education and the Workforce.

Employers are clamoring for people who can do these kinds of jobs. That’s not only because of low unemployment. More skilled tradespeople are between the ages of 45 and 64, and nearing retirement, than workers in other occupations, according to the staffing company Adecco.

There is a need for 258,000 new automotive technicians this year, for example, double the demand of last year, TechForce reports; fewer than a fifth that many are in the pipeline.

Prospective employers “email you over and over and over,” said Tallman, who is in his final year at Williamson and already has eight job offers. “We don’t have to go somewhere and beg for the job. They’re pleading for us.”

Indiana launched an initiative called Next Level Jobs even before the pandemic hit, providing free training for high-demand occupations in advanced manufacturing, construction, and transportation and logistics.

Tennessee is spending $50 million to beef up career and technical training, especially in rural counties.

The governor of South Carolina has proposed allocating $17 million of that state’s coronavirus relief money to provide free tuition to technical colleges for training in high-demand occupations, including welding, driving trucks and running forklifts.

“The biggest thing is attitudes and awareness,” said Pressendo, of TechForce. “Trying to get people to understand that these jobs are high-tech, they’re high-paying, they’re secure.”

Wilson, at EVIT, returns the conversation to the revelations of the past two years.

“What people realized is that the backbone of who we are and what keeps our country going,” he said, “is often rooted in the jobs we prepare people for.”

This story about skilled trades training was produced by The Hechinger Report, a nonprofit, independent news organization focused on inequality and innovation in education. Sign up for our higher education newsletter.