Fake news on COVID-19, unscientific ‘cures’ for diseases, and superstitious discourse — YouTube in Telugu is filled with problematic videos. Many Telugu channels on the big tech platform host quacks, godmen, spiritualists, and a variety of content creators who peddle misinformation that is at best, drivel, and at worst, harmful to the health of those following the advice given by these channels. However, the content moderation on YouTube for Telugu videos is hardly up to the mark, and dubious content gets several lakh views without any action taken by YouTube.

Consider this video featuring Veeramachineni Ramakrishna — who calls himself a ‘Natural Diet Guru’. “There is no such thing as Omicron,” Ramakrishna declares in the interview on BellPeppers Media, a channel with 37,000 subscribers. “People are doing some show-off with a Rs 2.5 mask, as if they are going to stop it (coronavirus),” he says. He claims the Omicron variant of the coronavirus is a myth — a creation of pharma companies and media organizations to make profits. By any international standards, this video is misinformation about the pandemic — and if it was in English, it would have been taken down by the algorithms on YouTube, say tech experts. The video has over 4.25 lakh views at the time of writing, and has not been taken down since it was uploaded on December 30, 2021.

Veeramachineni Ramakrishna is a self proclaimed expert in treating almost all health issues ranging from weight loss to hair fall and cancer, through his diet plan. He appears on Telugu news channels as well as on several YouTube channels regularly. This video is one of the many where he mocks modern medicine. He has even claimed that he can cure cancer through his VRK diet plan — and this unscientific claim, too, has not been removed from the platform.

There are also videos promoting garlic as a cure for COVID-19, Paruchuri Mallik a chemical engineer by profession who was earlier arrested for fear mongering against COVID-19, in his latest video he claimed that garlic liquid and fenugreek seeds can cure Omicran variant of COVID-19 and also said that pomegranate peel juice could cure the COVID-19. Unscientific claims such as these continue to go unchallenged on YouTube.

On January 21, TNM reached out to YouTube for a comment on why they haven't taken action on these videos. Subsequently, the videos containing Veeramachineni's comments on Omicron and the one containing Mallik's claim that it can be treated with garlic juice and fenugreek seeds, have been pulled down. A day after this article was published, YouTube responded to TNM's query. 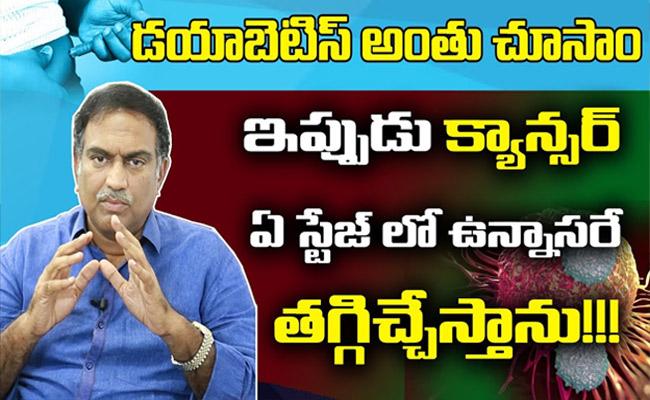 “If the people start believing and hesitate to address their problems through medical science, it will get complicated and lead to ineffective treatment. Doctors may find it difficult as the disease may reach an advanced stage in the meantime,” said Dr AVS Reddy, clinical research specialist in Oncology Biosimilars and COVID Piravir trials.

Dr Srikrishna RSV, senior pediatrician and member of the state COVID Task Force said, "In the backdrop of COVID-19, there is a huge surge in misinformation about the disease and treatment. To counter such misinformation and unscientific arguments, the government and other authorised agencies should act with a facts-based approach, using the guidelines provided by World Health Organization (WHO) and the Union Ministry of Health & Family Welfare."

Dr Lavakumar Reddy, state president of the Telangana Indian Medical Association, says, "Such claims are very problematic at a time we are battling the pandemic. We have already written to the Telangana government to take strict action against such persons spreading rumors and unscientific information which can endanger people's lives." IMA Telangana’s letter to Chief Minister K Chandrasekhar Rao was sent in September 2021, however so far there is no action.

While the spreading of unscientific information over a disease that has shaken the world for almost two years is concerning, other channels are pedaling superstition and unverified content in the name of spirituality on YouTube.

Popular YouTube channel I Dream Telugu Movies interviewed Nanduri Srinivas (purportedly the Director of Engineering for McAfee Software) in which he makes numerous falsehoods utterly devoid of scientific thought — that children with autism are born as a result of the atrocious crimes they have committed in an earlier life, or if their parents have committed crimes in a past life. His “cure” is just as nonsensical — uttering Telugu and Sanskrit alphabets, while making the child read and recite the slokas of Druvastuti of Bhagavatam epic.

Another YouTube channel Suman TV interviewed a man named Arvind Aghori, who claimed there is rebirth after death, and mocked rationalists, scientists and doctors who have called them superstitious beliefs. "If the couple have had sex thinking about dead people, it is possible to give birth to them. This is beyond science which no one can understand, so there is definitely an existence of a journey related to birth and rebirth," he claimed in the video.

Suman TV has hundreds of videos that promote pseudoscience, and regularly interviews quacks and so-called godmen who claim they can drive out evil from houses.

Another YouTube channel PMC (Pyramid Meditation Channel) Telugu, which promotes the ideas of godman Subhash Patriji, also has hundreds of videos that push unscientific babble. Subhash in one video claims that human beings come out of their bodies every night. The PMC has 3.10 lakh subscribers for its Telugu channel, and over 13000 on the English channel.

Babu Gogineni, a well-known rationalist and humanist, notes that videos brazenly promoting superstitious beliefs, while denigrating science, can have grave implications. A year ago in Madanapalle, Alekhya (27) and Sai Divya (22) were bludgeoned to death, allegedly by their parents Padmaja and Purushottam Naidu as part of a ritual. The parents told police that they believed their dead daughters would be brought back to life. And last week, three members of a family, including a seven-year-old girl, were found dead in Hyderabad in what is suspected to be part of an occult ritual. The 2018 deaths of 11 members of a family — 10 by mass suicide and one by strangulation — in Delhi’s Burari were also believed to be connected to occult practices and superstitions.

“A glance at the comments section under the videos shows hundreds of people expressing their agreement and faith in the ideas of rebirth, life after birth and even coming back to life after death. Don't be surprised later when something like the twin murders of two educated young women happens like in Madanapalle. The murders happened because the well-educated parents who killed their own daughters expected them to come back to life within hours,” he said.

“[These are] slickly-made videos, fronted by influencers who are no doubt rewarded well by the producers to promote ignorance. This is a dangerous thing in a society with poor literacy and steeped deep in superstition.”

A spokesperson from YouTube said “YouTube is an open platform where anyone may post videos as long as they comply with our Community Guidelines. We act quickly to remove flagged videos that are violative. Our Misinformation Policy clearly outlines certain types of misleading or deceptive content with serious risk of egregious harm that are not allowed on YouTube and certain exceptions we may apply for videos that have sufficient context. More than 20,000 people around the world, including those with Telugu language expertise, work to review and remove content that violates our policies. We also have established processes for reporting content and remove content when flagged to us by users or trusted flaggers.”