With Russia cut off from foreign processor makers Intel and AMD, the country has been scrambling to switch to more local CPUs and components.

Russia's latest step in securing supply chains for new computers comes in the form of a newly released desktop motherboard designed to support x86-compatible CPUs made by Chinese chip designer Zhaoxin, which is a joint venture between Taiwan's Via Technologies and the Shanghai municipal government.

The new motherboard, called MBX-Z60A, is made by electronics manufacturer Dannie, which has headquarters in Russia and China, according to a machine translation of an article published last week by Russian-language news aggregator Habr.

The motherboard was designed to help Russia replace the x86 processors it can no longer get from Intel and AMD due to export bans imposed by the US and other countries.

Habr said that Danny LLC, the Russian division of Dannie producing the motherboard, has the capability to make tens of thousands of boards every month, and that could expand over time.

The MBX-Z60A has a micro-ATX form factor, meaning it can fit in smaller desktops, and the CPU going inside is Zhaoxin's KaiXian KX-6640MA. There is some conflicting information on the processor's specs. Habr said that it has eight cores, but test results submitted for the Geekbench and PassMark benchmarks indicate that the KX-6640MA has four cores. 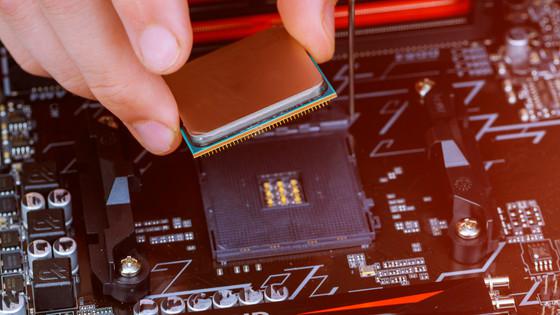 This is corroborated in a report by CNX Software, where benchmarks showed a base frequency of 2.1 GHz, a turbo frequency of 2.6 GHz, an L2 cache of 4MB, and a thermal design power of 25 watts. The processor also comes with 16 lanes of PCIe 3.0 connectivity and USB 3.0 support.

In other words, the KX-6640MA isn't just behind the times in terms of features, it's also not fast — at all — even when compared to recent smartphone chips, as Habr notes.

According to test results submitted for the PassMark benchmark, the KX-6640MA had an average CPU mark score of 1,566, which puts it at a fraction of the 8,543 score notched by Apple's A14 Bionic chip that goes in 2020's iPhone 12 family of smartphones.

When you compare the KX-6640MA to four-core options from Intel, it's very unflattering for Zhaoxin, given that the CPU seems to have come out last year. For instance, Intel's Core i5-2500K from 2011 has an average CPU mark score that is 2.5x higher than the KX-6640MA, and the score for Intel's Core i3-12100 from this year is more than 9x higher.

Habr said the KX-6640MA should still be suitable for a "wide range of office tasks," and at least the processor will be compatible with x86-based software. But its slow nature underlines the issues Russia has created for itself by committing atrocities against a neighboring country.

The KX-6640MA is also going into a new laptop manufactured by Russian device maker Tonk, as Russian-language IT news site iXBT.com reported earlier this month.

As for other efforts that will help Russia replace Intel and AMD CPUs in PCs, a state-backed company called Rostec was working on laptop chips using the open-source RISC-V instruction set architecture, according to a report from last year.

On the server side, Russia has been adjusting to export bans with the introduction of a new supercomputer platform that can use foreign x86 CPUs as well as the country's homegrown Elbrus processors. The idea is to help developers port x86-based programs to Elbrus.

But even then, the performance of Elbrus-based servers hasn't been promising, with Russian-language site ServerNews.ru reporting in December that SberInfra, the technology division of Russia's biggest bank Sber, found Elbrus processors were inadequate for multiple workloads due to "insufficient memory, slow memory, few cores [and] low frequency." ®