Emplacement： Accueil / La technologie / From Michael Charlton to Leigh Sales: The evolution of ABC election-night broadcasts over more than 60 years

From Michael Charlton to Leigh Sales: The evolution of ABC election-night broadcasts over more than 60 years

For more than 60 years, the ABC has provided television coverage of the vote count on federal election night, and as Leigh Sales prepares to take her seat in the host's chair on Saturday, she's gripped by both excitement and high anxiety.

"To be honest, the anticipation is killer and very stressful because it's such a massive broadcast with so many moving parts," Sales says.

"The week leading up to it, I'm always highly anxious.

"The worst part is usually about 1pm on the day, when I get this absolutely sinking feeling of, 'I have to go through with it now, it's too late for them to get somebody else.'

"Once it hits 6pm though, and the train starts rolling, the anxiety melts away because I'm completely distracted by the job at hand and it's so interesting and engaging."

Sales took over presenting the ABC's federal election coverage from Kerry O'Brien in 2016 in what turned out to be a record-breaking seven-hour marathon which ended with her making a hilarious end-of-show quip: "Suck on that Kerry O'Brien."

Malcolm Turnbull had toppled Tony Abbott a year earlier and called a double-dissolution election, but it proved to be a tight contest that delivered no clear result by the end of the night and it was days before Turnbull could claim victory.

That dramatic broadcast taught Sales to be ready for anything on election night.

"The challenge is just overcoming the fear of the empty script and not knowing how the night is going to unfold," she says.

"But I've learned to trust the process and to know that there are many different elements I can call on to fill the time. I also know I've done it before so I just tell myself, 'It'll be fine, you know how to do it.'"

Sales is among an esteemed group of ABC broadcasters, including Michael Charlton, James Dibble, Michael Willesee, Richard Morecroft and Kerry O'Brien, who have been the face of election-night coverage since the first ABC TV broadcast in 1958.

Over 30 years, Antony Green has also been a critical part of the ABC coverage, providing unparalleled insights and crunching the numbers to ultimately make a call on who he thinks will win.

"One of the most exciting bits is when Antony Green starts getting a steady of stream of numbers and he starts connecting some dots for the viewers," Sales says.

"He explains things so clearly and I trust him implicitly, so it's fantastic when he starts making big calls.

"Obviously, it's both thrilling and gut-churning when the executive producer tells me to throw to Antony because he's in a position to make a prediction on the overall result.

"It still makes me feel kind of ill, though, to be the person saying, "The ABC is now officially calling this election as 'XYZ …' It's just so much responsibility."

"Late in the night, I also often will be texting staff or MPs that I know, on the winning or losing side, to send them either a congrats or a message of condolence.

"I always feel a bit torn up for whoever is on the losing side because, no matter the outcome, all of them work so incredibly hard and for those who lose they are always just gutted.

"I've been around so long too that from Kevin Rudd onwards, everyone who has been PM or opposition leader has been a contact I've had for at least a decade, so I always feel this sense of, 'Wow that person is the prime minister now.'

"Politics is fascinating because you never can be quite sure who's going to rise so there's often a feeling of, 'Wow, that's who got there.'"

Handpainted results and smoking on set

According to ABC document archives, the earliest federal election coverage dates back to 1931 when the Australian Broadcasting Company (a small privately owned nucleus network from which the ABC as a commission was formed in 1932) provided a radio broadcast on the election of Joseph Lyons, leader of the United Australia Party, who became Australia's 10th prime minister in a minority government with support from the Country Party.

A variety of election-night coverage has been aired on ABC radio networks over the national broadcaster's 90 years, and on Saturday Sabra Lane and Raf Epstein will bring listeners the results on local ABC stations, ABC NewsRadio, RN and the ABC Listen app. 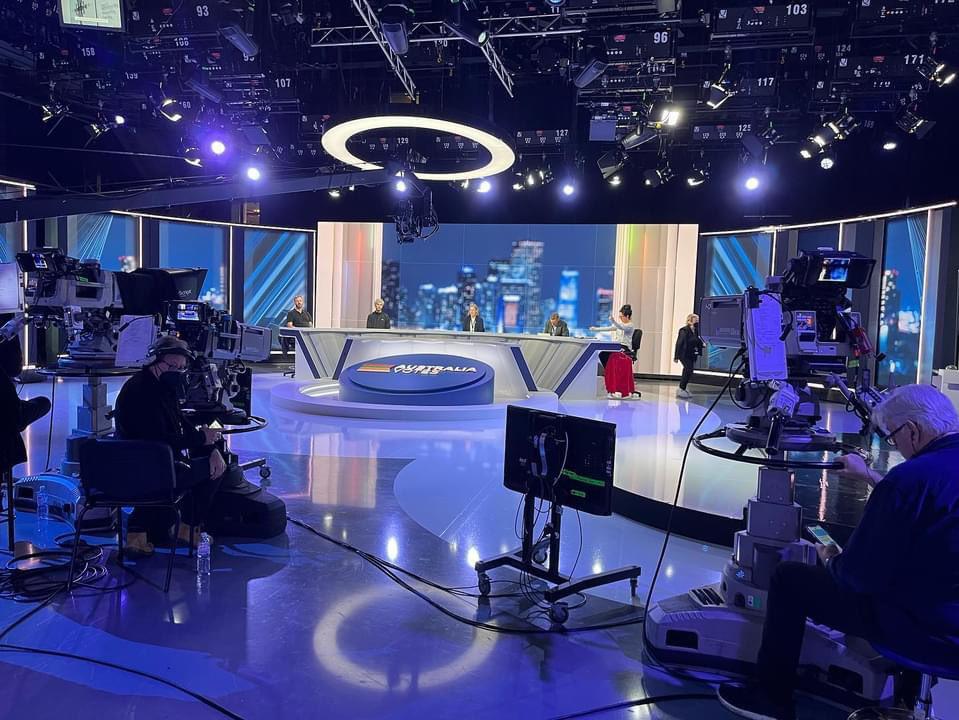 The first television broadcast in 1958 was hosted by Michael Charlton, an experienced radio broadcaster who had been the first person to appear on ABC TV when it launched two years earlier (his father Conrad Charlton was the first voice on ABC radio when the public broadcaster started in 1932).

"Tonight, the ABC News service welcomes you to the first television coverage of a federal election," Charlton declared, cigarette in hand. And he wasn't the only one — guest commentators were smoking on air and director Keith Fraser was puffing on a cigar in the control room!

The pioneering election coverage was broadcast from the Gore Hill studios in Sydney with an outside broadcast unit set up at the NSW tally room in Martin Place to film the results as they were posted on a tally board.

An ABC Archives behind-the-scenes film gives a fascinating insight into how the program was produced, showing electoral authorities using mechanical counters to add up votes and results being hand painted onto tiles displayed on the tally board as the government of Robert Menzies was re-elected.

As the ABC marks 90 years, the public broadcaster's archivists have unearthed a selection of coverages from over the years.

In 1969, a young Michael Willesee hosted the coverage of the re-election of John Gorton's Liberal-Country Party government amid the click-clack sound of typewriters on the tally room floor.

The 1972 coverage of the Gough-Whitlam-led Labor Party winning government was the last broadcast in black and white.

While early coverages were staged in television studios, for the most part the election-night count was broadcast from the National Tally Room in Canberra which, veteran political journalist Barrie Cassidy recalled, provided a great atmosphere as the votes were counted.

Cassidy said: "The only information provided to the TV networks, and the public, came via the electoral commission on what amounted to a giant scoreboard. As each result went up in individual seats, posted on the scoreboard with numbered tin sheets just like you see at country footy matches, either one side of the crowd or the other would let up an enormous cheer. It might have startled the TV audiences, but the atmosphere was amazing.

"People would queue outside the centre to get in and, just like bars in Chapel Street, the doorkeepers would let 20 people in only when 20 people left, to prevent overcrowding. There were, of course, no computers and no mobile phones and very few fixed phone lines. Those lines were being used almost all of the time, so contact with party organisers and scrutineers was at a minimum, which again meant the media and the public were almost totally dependent on the scoreboard."

In fact, in 1983, Cassidy's first election-night broadcast, so many people were flocking to the Tally Room that host Richard Morecroft made an appeal on behalf of the electoral commission for people to stay away.

To the lament of many journalists and politicians, technology eventually caught up with the tally room. It was superseded by the advent of computerised results and the internet, and after 2010 the TV networks returned to broadcasting from their studios.

Antony Green joined the ABC in 1991. He had completed a degree in economics with honours in politics and a degree in pure mathematics and computer science, was studying a post-graduate degree in econometrics and writing software when he saw an ad for an election researcher.

He actually then designed the ABC's election computer system, known as ERADS, and quickly became an on-air talent.

"My first big role on election night was the 1993 federal election," Green told ABC Backstory in an interview reflecting on his 30 years on air.

"It was the first federal election to use the computer system I designed and it called the return of the Keating government early, earlier than many were prepared to believe."

Green, who is clocking up his 12th federal election coverage, has developed the computer system over the decades and his results are now displayed on a high-tech touchscreen.

"In the early days, there were breaks in data feeds and moments when computers died. I had a regular election campaign nightmare of being on-air when the computers all went down and there was no data. No data, no election coverage."

Election coverages are produced by an experienced and highly skilled production team. Eric Napper, now head of News Operations and Projects, was a critical player behind the scenes of the ABC's election broadcasts from the mid-90s to 2018. He started as a director, then became a producer and ultimately the executive producer.

"The format of elections really hasn't changed a lot over the years," he says.

"We've always reported individual electorates, shown the overall result, crossed live to candidates in the field, and involved our most respected journalists. What's changed over the years is the technology, and the pace of the program.

"Early broadcasts were plagued by technical problems, particularly in our computer systems, so much so that we would have a camera dedicated to shoot the official tally board just in case the computer passed out.

"In some elections, data was delivered by fax and manually entered into a character generator or a clunky computer.

"And technology that we now take for granted — or is even passé — was in its infancy, risky and expensive. I recall once paying a tech firm $1,500 to burn a single DVD of animations. And another $1,500 for a back-up."

Insiders executive producer Sam Clark now heads up the ABC elections team, which is always looking for ways to innovate the coverage.

"Antony Green and his new and improved touchscreen will bring audiences the most timely and accurate projections as votes are counted, and for the first time David Speers will appear as part of our election-night team," Clark says.

"He'll present The Tally Room — a new segment which incorporates cutting-edge augmented reality graphics which will help viewers understand the trends that sit behind the result.

"The segment allows David and his panel — Vote Compass host Bridget Brennan, Labor strategist Kosmos Samaras and Liberal strategist Tony Barry — to analyse which voters have shifted their vote, and where the contest is being won and lost. Have coal mining communities in Queensland swung back towards Labor? Have electorates with large religious communities continued to move towards the Coalition? They are the sorts of trends David and his panel of experts will be looking for and analysing as they are identified in real time."

In the past, radio or TV coverage were the only options for the ABC audience, but now they can check results on their smartphones, tablets and computers, and ABC News digital is providing a range of coverage on a variety of platforms.

When the polls close, the count begins. By the end of Saturday night, we should know the result and Leigh Sales can then breathe a sigh of relief.