The upcoming week is filled with a few big rate decisions from the RBA, BOE, and ECB. The RBA may end its bond purchase program and could bring forward rate hike expectations, given the stronger-than-expected acceleration in inflation.The BOE is expected to deliver a follow-up rate increase and possibly signal a couple more are coming. The ECB will try to stick to the script that it is unlikely they will hike in 2022, which surprisingly has not been tested despite eurozone inflation increasing at a record pace.Financial markets don’t expect the ECB to move until September 2023, but that could shift as all the major central banks enter tightening mode.

After a sixth straight weekly gain, oil traders will pay close attention to the upcoming OPEC+ meeting that should not disrupt how tight this energy market has become.Crude demand is outpacing whatever supply is coming from OPEC+ as they have been falling well short of their commitments.Expectations are for the cartel to rubber stamp the 400,000 bpd increase in March, but no one expects them to actually reach those levels.

On Friday, the January US nonfarm payroll report will show that labor market recovery took a hit from omicron, while average hourly earnings continue to rise.Wage pressures are not going away and that should support optimism for the outlook for the US consumer.

US hiring expected to moderate due to Omicron

BOE to hike by 50bps

Can crude rally for a 7th straight week?

Hot inflation may be public enemy No.1 for triggering the Fed’s hawkish turn, but investors are still keeping a close eye on the whether slower job growth could complicate the Fed’s aggressive tightening strategy. The January nonfarm payroll report will show the labor market recovery continues to moderate as the Omicron variant disrupted hiring.The consensus estimate for jobs created in January is 178,000, which would be a decrease from the 199,000 gain in December. Labor supply is still very tight and that may continue to be the driver behind average hourly earnings increases.

On Monday, Qatar’s emir will meet President Biden to discuss several issues, primarily focusing on the global energy crisis and security.Thursday is a big day for Biden’s Fed nominees as Raskin, Cook, and Jefferson as they will appear before the Senate.If confirmed, this will represent a landmark demographic overhaul of the Fed.

A lot of economic data to come from Europe next week, with every day offering a selection of important readings that could influence the currency markets.

But there’s no doubt what the headlines will be, with flash CPI readings coming a day before the ECB meeting. The central bank is one of the few remaining in camp transitory and they are expected to persist, something that will be helped by a softer inflation number the day before. 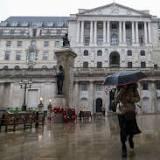 Markets are ahead of the curve once more with at least one 10 basis point hike priced in by October and maybe another by the end of the year. Christine Lagarde pushed back to no avail last time, a similar outcome could be on the cards if the CPI data isn’t kind to them.

Developments in Ukraine appeared to hit European markets harder than the US on Monday so we could see similar sensitivity should the situation continue to deteriorate.

Next week is all about the BoE meeting, with markets pricing in a more than 90% chance of a second consecutive rate hike, taking the base rate to 0.5%. With up to three more priced in this year, there is scope for the central bank to follow the Fed in leading investors further down the hawkish path.

An unusual side note, the Prime Minister’s job looks far from safe as the Sue Gray investigation has turned into a full blown police inquiry into numerous alleged parties during lockdown. Boris can survive the embarrassment but will he survive an inquiry? The timing of the Sue Gray report remains unknown but could make life very difficult for the PM. Perhaps the oddest thing is how little markets seem to care (for now).

The ruble has had a rough time the last couple of weeks as tensions between Russia and the West have intensified. It’s down around 5% since the start of the year after a recovery on Thursday, with a diplomatic response still being sought, despite the wide gap that still seemingly exists. There remains the risk of invasion which could punish the ruble as the country gets hit with sanctions.

The SARB raised interest rates for the second consecutive meeting, taking the repo rate to 4%. This comes as inflation was running at the upper end of its 3-6% target range and despite growth falling short of previous expectations last year. Growth is still expected to be 1.7% this year, with inflation at 4.9%, up from 4.3% previously.

No major events next week.

The quarterly inflation report showed little sign of a change of course for the CBRT, with the central bank remaining bullish on the direction of the economy despite dramatically raising inflation forecasts for 2022 to 23.2%; driven by the lira, food prices, labour costs, and administered prices.

Next week we’ll get PPI and CPI data on Thursday which will offer some more insight into price pressures. Not that it will have an impact on the direction of travel for the enemy of interest rates. The lira remains stable, as it has for most of the year so far but when it comes to the currency, you can never expect it to last.

The trading week kicks off early in the weekend with China Manufacturing and Services PMIs for January. The PMIs are expected to show that China’s economy slowed down slightly at the start of the year and that manufacturing and services showed no growth in January.

Manufacturing had to deal with seasonal factors and the services sector was dragged down due to the government’s zero-Covid policy, which has meant strict lockdowns. China will likely continue to increase spending to support the economy.

Chinese markets will be closed for most of the week due to the Lunar New Year holiday.

A big focal point will be the start of the Winter Olympics in Beijing on February 4th.President Xi is expected to meet President Putin at the opening ceremony.

India will continue to try to foster a recovery with modest fiscal consolidation in the annual budget for FY 2022-2023 on Tuesday. The country has been hit hard by Covid-19 and the recovery remains fragile. Tax revenues in FY 2021-2022 were higher than expected and the government is expected to use the windfall to fund Covid-19 programmes as well as reduce the ballooning deficit so as to cut borrowing costs.

The RBA policy meeting on Tuesday could be significant, as the central bank is expected to announce the winding up of its asset purchase program. Governor Philip Lowe has stated repeatedly that he will not raise rates before wages rise to 3%, so a rate hike is not happening until much later in the year. However, if the RBA announces that it is bringing forward the timing on eventual hikes, the Australian dollar could receive a boost.

New Zealand releases Q4 2021 employment data on Wednesday. The economy continues to improve despite the Omicron wave, and there are expectations for a slight increase in employment. The unemployment rate fell to a 14-year low in Q3 to 3.4%, and is expected to remain unchanged. The labour market remains tight, which could lead to acceleration in wage growth.

A decent amount of economic releases will include industrial production, labor, and housing data, but nothing that should move the needle for the Bank of Japan.

Natural gas prices have been a rollercoaster ride after a short squeeze on Thursday, and now a major snowstorm for the East Coast could pump up prices again. The Ukraine situation may see a short period of calm as diplomacy is entertained.

Crude prices have been on fire, rising for a sixth straight week as the demand outlook improves and over geopolitical fears could lead to severe disruptions. The supply side continues to support a tight market as OPEC+ is expected to stick to their plan of increasing output by 400,000 bpd in March, even though their compliance last month only hit 60% of plan.

Gold’s pain may last a little longer until the Fed’s aggressive pivot with tackling inflation is fully priced in.The $1,800 level was a key support level for gold, so momentum selling has the potential to make this an interesting trade.If it gets ugly quick and $1760 breaks, gold may not see much support until $1720.

Bitcoin looks like it is stabilizing but many investors are still concerned about a crypto winter which could mean the current rebound might not last.The biggest risk right now is if Bitcoin mining continues to lose key hubs as more countries battle surging energy costs.

The cryptoverse is eagerly waiting for President Biden’s executive action that will begin regulation of cryptocurrencies as a matter of national security.This could be done in the coming weeks and could have an impact on stablecoins, NFTs and cryptos.

This article is for general information purposes only. It is not investment advice or a solution to buy or sell securities. Opinions are the authors; not necessarily that of OANDA Corporation or any of its affiliates, subsidiaries, officers or directors. Leveraged trading is high risk and not suitable for all. You could lose all of your deposited funds.

Senior Market Analyst, The Americas at OANDA With more than 20 years’ trading experience, Ed Moya is a senior market analyst with OANDA, producing up-to-the-minute intermarket analysis, coverage of geopolitical events, central bank policies and market reaction to corporate news. His particular expertise lies across a wide range of asset classes including FX, commodities, fixed income, stocks and cryptocurrencies.Over the course of his career, Ed has worked with some of the leading forex brokerages, research teams and news departments on Wall Street including Global Forex Trading, FX Solutions and Trading Advantage. Most recently he worked with TradeTheNews.com, where he provided market analysis on economic data and corporate news.Based in New York, Ed is a regular guest on several major financial television networks including CNBC, Bloomberg TV, Yahoo! Finance Live, Fox Business and Sky TV. His views are trusted by the world’s most renowned global newswires including Reuters, Bloomberg and the Associated Press, and he is regularly quoted in leading publications such as MSN, MarketWatch, Forbes, Breitbart, The New York Times and The Wall Street Journal. Ed holds a BA in Economics from Rutgers University.