The Wireless Ethernet Bridge gives you the freedom to place any standard network resource virtually anywhere in your office.

Based on signal strength, it dynamically shifts between 11, 5.5, 2, and 1Mbps network speeds for maximum availability and reliability of connection. So you’ve got the flexibility and performance you need from your wireless network.

• An All-in-One Wireless Solution for Any Ethernet-Ready Network Device • Interoperable with 802.11b (DSSS) 2.4GHz-Compliant Equipment

• No Additional Drivers Are Needed

• Up to 11 Mbps High-Speed Transfer Rate • Dynamically Shifts between 11, 5.5, 2, and 1Mbps for Maximum Adaptability

• Supports up to 50 Remote Clients

• Capable of up to 128-Bit WEP Encryption 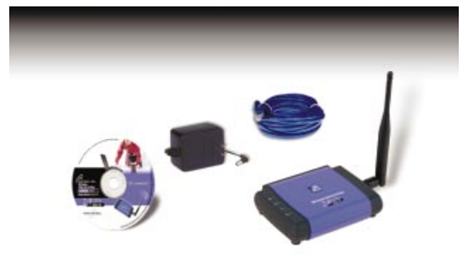 • One Setup CD-ROM with User Guide

Getting to Know the Wireless Ethernet Bridge

The Wireless Ethernet Bridge’s Back Panel

Reset ：The Reset button resets the Bridge to its factory default settings.

LAN ：The LAN port is where you will connect your Ethernet network cable.

Power ：The Power port is where you will connect your power.

PWR ：Green. The PWR LED will light up when the Bridge is powered on.

DIAG ：Green. The DIAG LED will light up when there is a connection error. Re-establish the connection to eliminate the error.

LAN： Green. The LAN LED will be lit steadily when the Bridge is connected to the LAN. The LED will blink when there is LAN traffic.

WLAN ：Green. The WLAN LED indicates the status of the link to the wireless local area network (WLAN). The WLAN LED will be lit steadily when the Bridge is connected to the WLAN. The LED will blink when there is WLAN traffic.

A wireless LAN is exactly like a regular LAN, except that each network device in the LAN uses a Wireless Ethernet Bridge to connect to the network without using wires. Computers in a wireless LAN must be configured to share the same radio channel.

The use of a unique ID in a Basic Service Set is essential.

The Wireless LAN infrastructure configuration is appropriate for enterprisescale wireless access to a central database, or as a wireless application for mobile users.