1 In balance: Quantum computing needs the right combination of order and disorder 1

In the race for what may become a key future technology, tech giants like IBM and Google are investing enormous resources into the development of quantum computing hardware. However, current platforms are not yet ready for practical applications. There remain multiple challenges, among them the control of device imperfections ('disorder').

It's an old stability precaution: When large groups of people cross bridges, they need to avoid marching in step to prevent the formation of resonances destabilizing the construction. Perhaps counterintuitively, the superconducting transmon qubit processor -- a technologically advanced platform for quantum computing favoured by IBM, Google, and other consortia -- relies on the same principle: intentionally introduced disorder blocks the formation of resonant chaotic fluctuations, thus becoming an essential part of the production of multi-qubit processors.

To understand this seemingly paradoxical point, one should think of a transmon qubit as a kind of pendulum. Qubits interlinked to form a computing structure define a system of coupled pendulums -- a system that, like classical pendulums, can easily be excited to uncontrollably large oscillations with disastrous consequences. In the quantum world, such uncontrollable oscillations lead to the destruction of quantum information; the computer becomes unusable. Intentionally introduced local 'detunings' of single pendulums keep such phenomena at bay. 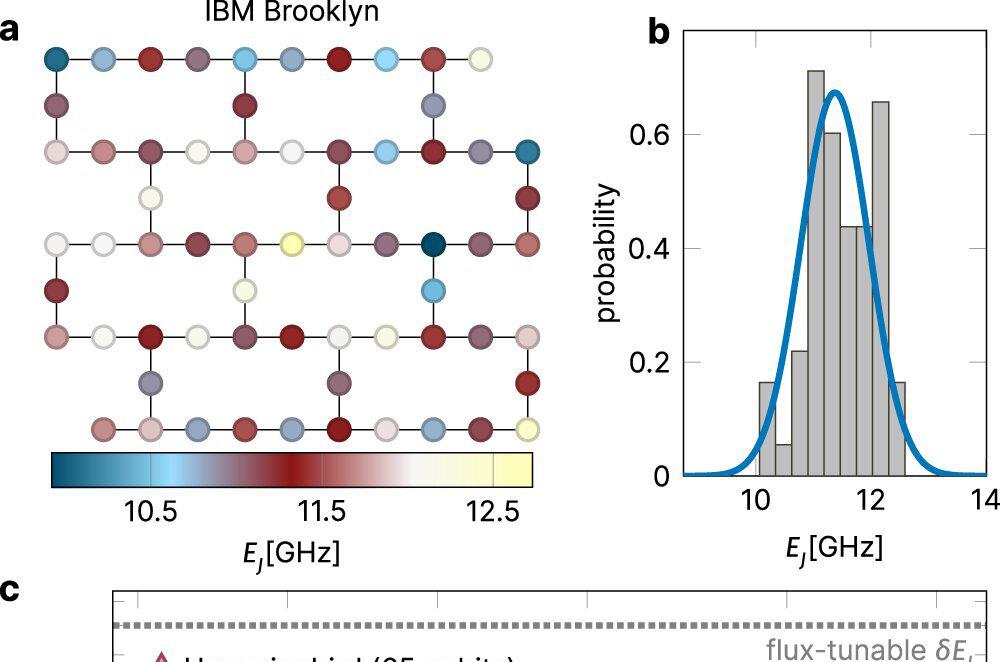 'The transmon chip not only tolerates but actually requires effectively random qubit-to-qubit device imperfections,' explained Christoph Berke, final-year doctoral student in the group of Simon Trebst at the University of Cologne and first author of the paper. 'In our study, we ask just how reliable the "stability by randomness" principle is in practice. By applying state-of-the-art diagnostics of the theory of disordered systems, we were able to find that at least some of the industrially pursued system architectures are dangerously close to instability.'

From the point of view of fundamental quantum physics, a transmon processor is a many-body quantum system with quantized energy levels. State-of-the-art numerical tools allow one to compute these discrete levels as a function of relevant system parameters, to obtain patterns superficially resembling a tangle of cooked spaghetti. A careful analysis of such structures for realistically modelled Google and IBM chips was one out of several diagnostic tools applied in the paper to map out a stability diagram for transmon quantum computing.

'When we compared the Google to the IBM chips, we found that in the latter case qubit states may be coupled to a degree that controlled gate operations may be compromised,' said Simon Trebst, head of the Computational Condensed Matter Physics group at the University of Cologne. In order to secure controlled gate operations, one thus needs to strike the subtle balance between stabilizing qubit integrity and enabling inter-qubit coupling. In the parlance of pasta preparation, one needs to prepare the quantum computer processor into perfection, keeping the energy states 'al dente' and avoiding their tangling by overcooking.

The study of disorder in transmon hardware was performed as part of the Cluster of Excellence ML4Q in a collaborative work among the research groups of Simon Trebst and Alexander Altland at the University of Cologne and the group of David DiVincenzo at RWTH Aachen University and Forschungszentrum Jülich. "This collaborative project is quite unique," says Alexander Altland from the Institute for Theoretical Physics in Cologne. "Our complementary knowledge of transmon hardware, numerical simulation of complex many-body systems, and quantum chaos was the perfect prerequisite to understand how quantum information with disorder can be protected. It also indicates how insights obtained for small reference systems can be transferred to application-relevant design scales."

David DiVincenzo, founding director of the JARA-Institute for Quantum Information at RWTH Aachen University, draws the following conclusion: 'Our study demonstrates how important it is for hardware developers to combine device modelling with state-of-the-art quantum randomness methodology and to integrate "chaos diagnostics" as a routine part of qubit processor design in the superconducting platform.'