20 minutes with the original Motorola Droid: Well, that didn't go as expected

If you've been following Android for long, you probably have pretty pleasant memories of the original Motorola Droid.

Android phone to come out, but it was arguably the first one that mattered. Up until its arrival, Android was a small-scale project known mostly by techie-type folks (you know, like us). The Droid rocketed into America with

that took on the then-untouchable iPhone in a then-unthinkable way -- and boy, did it ever deliver.

As one strikingly handsome prophet

wrote at the time

So why the huckleberry am I telling you all of this now? Good question, Myrtle. You see, I was determined to move back into my original Motorola Droid for a little while this week. No joke: After spending a few days

revisiting my 2013 phone for perspective

last week, I thought it'd be interesting to take things a step further and see what it'd be like to use the ancient-seeming first-gen Droid in 2016.

With the release of Verizon's 7,427th Droid-branded device this summer (I think that number's right, anyway -- I lost track somewhere between the Droid X2 and the Droid Razr HD Maxx 4G 0.7), now seemed like the perfect time for such an experiment. I charged the phone over the weekend, charged myself as much as possible Sunday night, and started the week full of energy and ready to explore. 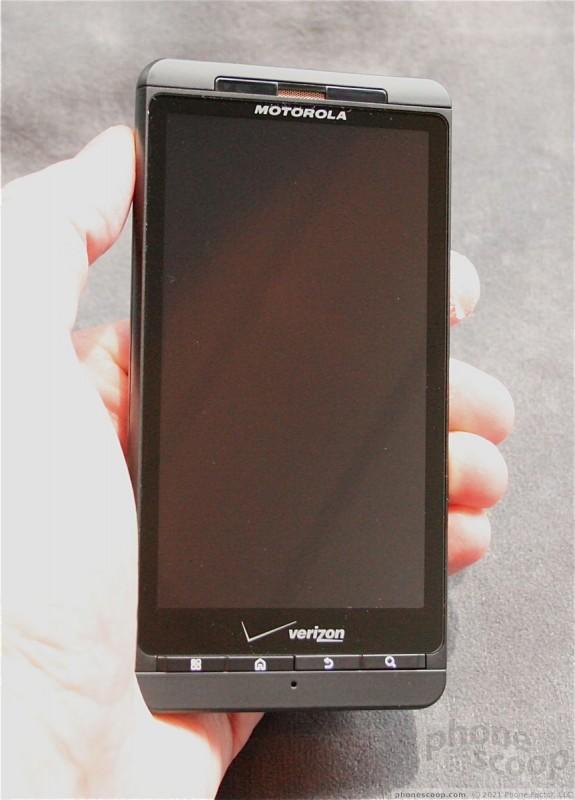 There was just one problem: No matter how many times or for how long I pressed the Droid's power button, the damn thing wouldn't turn on. And nothing I tried, including various button-pressing combinations and more hours on the charger, made any difference. Yes, indeed: My dear old friend appears to have blinked its menacing red eye at me for the final time.

But hey, I've never been one to let a minor challenge stand in my way. Let's do this, shall we?

Goodness gracious, does this phone feel tiny. Well, tiny and chunky at the same time, really. Kind of like me during my awkward middle school pha

The Droid's 3.7-in. screen seems downright

by today's standards. It's also rather dark -- much darker than I remember. In fact, I can't make out much of anything on it beyond a few fingerprint smudges. I guess that 854-x-480 resolution really doesn't hold up in a world filled with super-quadra-fragilistic HD expectations.

The Droid's slideout physical keyboard is a nice surprise. I used to love this thing back in the day. It still feels great to type on, though I must say I'm rather disappointed with its accuracy. No matter what I type, nothing ever shows up on the screen.

Typing on the (nonfunctional) phone's keyboard proved to be quite frustrating

I feel that same sense of befuddlement when revisiting the phone's camera: The Droid's 5-megapixel shooter seemed wildly impressive for its time. Now, though? I've tried to take tons of pictures with this phone -- aiming it at everything from flowers to falafels and pressing the physical shutter button until my fingers felt fatigued -- but every single image puts nothing but blank grayness on the device's perpetually dark display.

As for the software, Android 2.2 Froyo is far less colorful than I remember -- though it appears in hindsight, I was wrong about one thing: People always used to say you couldn't find any apps on Android, and I always said that was a load of hooey. But now, on this 2009 phone, I can't find any apps at all. In fact, I've spent the past 17 minutes swiping and tapping wildly on its screen, and absolutely nothing has happened.

Maybe it's just the phone's limited power; after all, this was back when cores were single (gasp!), RAM was less than a gig (gulp!), and G's were only 3 (wheeze!). But I've gotta tell you, looking at it now, this device is just not responsive. At all. Sheesh.

All in all, it's safe to say my experience using this (nonfunctional) original Motorola Droid has made me appreciate just how far mobile technology has evolved. Current Android phones are

much more advanced and effective -- in terms of display visibility, photo quality, responsiveness, you name it. The difference is almost unreal.