“If you don’t have to travel on Wednesday, don’t. If you can postpone your trip even 24 hours, you may be better off. I think Wednesday is going to be a very chaotic day,” said Henry Harteveldt, an airline industry analyst. “It’s a fasten your seatbelt, hang on kind of week, and the next few weeks as well.”

“We are working closely with aircraft manufacturers and the relevant authorities to alleviate operational concerns, and we hope to resume our US services as soon as possible,” the airline said.

Air India tweeted, Due to deployment of the 5G communications in USA, we will not be able to operate the following flights of 19th Jan’22:

ANA said in a statement, “With the launch of 5G service in the U.S. on Wednesday, January 19, the U.S. Federal Aviation Administration (FAA) has indicated that radio waves from the 5G wireless service may interfere with aircraft altimeters. As a result, Boeing has announced flight restrictions on all airlines operating the Boeing 777 aircraft, and we have cancelled or changed the aircraft for some flights to/from the U.S. based on the announcement by Boeing. We regret to inform you that some of the flights had to be canceled as the Boeing 787 aircraft were not able to be arranged.” 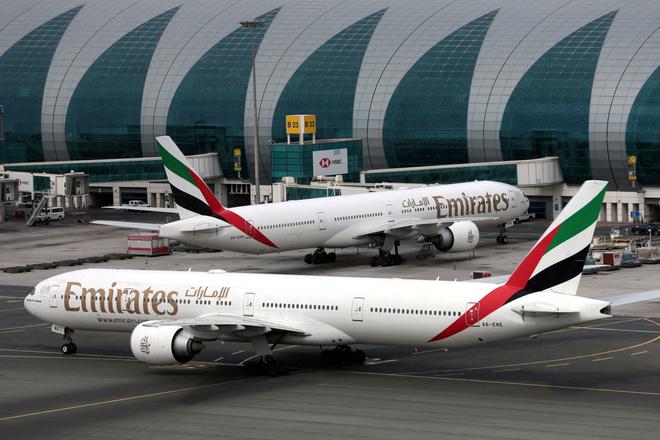 “Boeing has notified us that 5G signals for U.S. mobile phones, which will begin operating in the U.S. on January 19, 2022, may interfere with the radio wave altimeter installed on the Boeing 777. We have decided not to use this aircraft-type on the U.S. mainland routes until safety is confirmed, and we regret to cancel the flight that cannot be changed to Boeing 787″

The announcement by the four airlines caps a tumultuous two days of public bickering between Verizon and AT&T, and the airline industry as the two sides trade barbs in the media.

The suspensions come as the nation’s largest airlines warned about a “catastrophic disruption” to travel and shipping operations if the major telecoms roll out 5G near airports on Wednesday as scheduled.

“We are writing with urgency to request that 5G be implemented everywhere in the country except within the approximate two miles of airport runways as defined by the FAA on January 19, 2022,” said the airline CEOs in a letter to Transportation Secretary Pete Buttigieg and other top government officials.

“To be blunt, the nation’s commerce will grind to a halt,” they went on to say.

The letter was signed by the CEOs of American, Delta, United and Southwest, along with shipping giants FedEx and UPS.

Verizon and AT&T had already delayed the launch of their new C-Band 5G service twice due to warnings from airlines and aircraft manufacturers that the new system might interfere with devices planes use to measure altitude.

By Tuesday afternoon, both wireless carriers told CBS News they were delaying their 5G launch near airports.

By midday Tuesday, the White House announced it had stepped in to broker an agreement to pause the rollout.

“I want to thank Verizon and AT&T for agreeing to delay 5G deployment around key airports and to continue working with the Department of Transportation on safe 5G deployment at this limited set of locations. This agreement will avoid potentially devastating disruptions to passenger travel, cargo operations, and our economic recovery, while allowing more than 90 percent of wireless tower deployment to occur as scheduled. This agreement protects flight safety and allows aviation operations to continue without significant disruption and will bring more high-speed internet options to millions of Americans. Expanding 5G and promoting competition in Internet service are critical priorities of mine, and tomorrow will be a massive step in the right direction. My team has been engaging non-stop with the wireless carriers, airlines, and aviation equipment manufacturers to chart a path forward for 5G deployment and aviation to safely co-exist – and, at my direction, they will continue to do so until we close the remaining gap and reach a permanent, workable solution around these key airports,” said President Biden in statement.

AT&T: “We have voluntarily agreed to temporarily defer turning on a limited number of towers around certain airport runways as we continue to work with the aviation industry and the FAA to provide further information about our 5G deployment, since they have not utilized the two years they’ve had to responsibly plan for this deployment.”

Verizon spokesperson Richard Young: “We have voluntarily decided to limit our 5G network around airports. The Federal Aviation Administration (FAA) and our nation’s airlines have not been able to fully resolve navigating 5G around airports, despite it being safe and fully operational in more than 40 other countries.”

The airlines claim this week’s rollout of C-band 5G could potentially interfere with altimeters and other instruments.

“The FAA lists 17 systems it could be affected and it says the pilot may not be able to catch those errors in time to maintain safe flight and landing.” said Capt. Dennis Tajer with the Allied Pilots Association. “We’ve got every stakeholder that keeps the airplane safe, the airlines, the manufacturers, the pilot unions, even on the mechanic side the engineers saying ‘hey, slow down.’”

“So what you have is two carriers who spent a ton of money setting up their wireless networks and 5g suddenly being told hey forget all that please shut it down don’t use it and of course they’re upset about that,” said Ian Sherr, CNet Editor At Large. “The airlines want to make sure (5G) is bulletproof safe. And I don’t think a lot of people would argue with them about that. It’ll be interesting to see what it’s going to take to get them over the line of feeling comfortable. Because right now, it seems as though the fact that it’s being used throughout the world is not enough for them.”

Kiet Do contributed to this report.