Apple iPod: The First 10 Years of the Ubiquitous Media Player

#ThrowbackThursday: The iPod is one of the most iconic devices of the 21st century and the product that put Apple on the road to its current behemoth market position. We wrote this article in October 2011 as the original iPod was just turning 10. This week, Apple announced they are fully discontinuing iPod products. We've bumped this article as a nostalgia piece and to gain some perspective of how we viewed these devices back then.

In 2001, Apple launched an MP3 player that can be partly attributed with shaping the landscape of today's mobile computing market. Along with being the best-selling portable media player and saving Apple from near irrelevance, the iPod influenced many of Cupertino's ambitious and revolutionary projects, forcing much of the industry into a perpetual state of catch-up.

The iPhone birthed the smartphone as we know it and stands as the top-selling device of its kind -- likewise with the iPad and the tablet segment, despite Microsoft's early dabblings. Software-wise, the iTunes Store paved the road for digital music sales and represents the world's largest music retailer, while the App Store's sales dwarf all the competition combined -- Android included.

In fact, the iPod and related products prompted Apple to change its name from "Apple Computer" to just "Apple." Without fawning over Apple's every endeavor, we'd like to pay homage to the company's game-changing gadget on its 10th birthday. Join us as we take a brief stroll down memory lane...

The first iPod was developed in less than a year and although it didn't flip the music industry upside down overnight -- in fact, it received a lot of criticism -- it laid the conceptual framework for grander things to come.

Powered by a dual-core 90MHz ARM-based PortalPlayer processor and 5GB 4200RPM Toshiba HDD (a 10GB version came later), the rudimentary device only supported Mac computers as well as AAC, MP3 and WAV audio files. The first version of iTunes for Mac was released the same year in January.

Must see: Watch the first iPod being introduced by Steve Jobs...

Apple's second-generation music player arrived less than a year after the original device and brought several refinements including a cover for the FireWire port, an improved Hold switch and double the storage capacity.

It also abandoned the first-gen's mechanical scroll wheel in favor of the touch-sensitive wheel used on many future iPods. This model introduced support for Windows via Musicmatch. Prior to this, tech-savvy users were forced to use workarounds for Windows compatibility.

By April 2003, Apple prepared a full redesign of the iPod, adding an all-touch interface, a dock connector, a slimmer body and the maximum storage capacity was doubled to 40GB. The company also brought its own media platform (iTunes 4.1) to Windows, severing ties with Musicmatch. 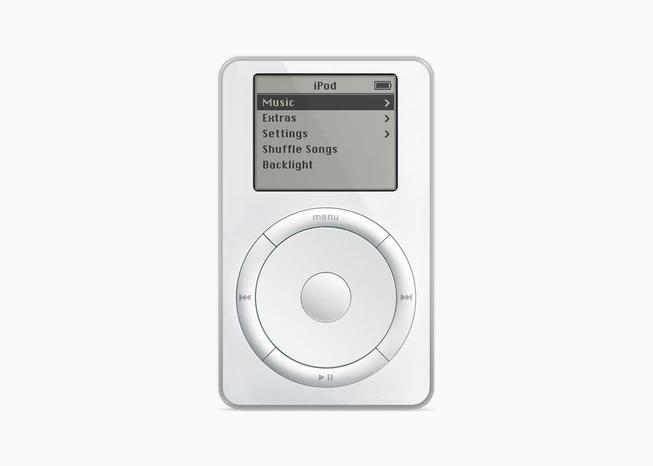 The iPod's increasing popularity prompted retailers Best Buy, Target and Dell to carry the device between 2002 and 2003. Microsoft and Creative prepared their rivals, the Media2Go and Nomad Zen.

After focusing on adding features to the original design, Apple went back to the drawing board and introduced a scaled-down minimalist iPod. The $249 iPod Mini was the first to have Apple's Click Wheel and only offered 4GB of storage.

Despite its slimmer, trendier design, many criticized the device's value. Around the same time, Apple replaced its $299 10GB iPod with a 15GB model, forcing retailers to reduce the 10GB model to $249. This caused consumers to be even more skeptical of the Mini.

The first fourth-gen version came in July with a redesigned Hold switch and the iPod Mini's Click Wheel. In October, Apple introduced a premium version called the iPod Photo ($499-$599), which had improved battery life (15 hours versus 12), a color screen and support for common image formats, which was especially cool for album art.

In February 2005, Apple replaced the 40GB iPod Photo with a thinner, cheaper 30GB model. By June, it decided to merge the iPod Photo and iPod "Classic" lines. Photo above shows the first U2 special edition iPod.

Shrinking its media player further, Apple introduced the first iPod Shuffle in early 2005. It served as an entry-level model with only 512MB or 1GB of storage and no display. Pricing was originally set at $99-$149. The second-gen Shuffle arrived well over a year later. It was roughly half the size of its predecessor with a belt clip and a more attractive aluminum case. Apple called it the "most wearable iPod ever." Despite its smaller size, it doubled storage capacities to 1GB and 2GB.

The second-gen iPod Mini landed shortly after the first Shuffle and offered an incredible battery life of 18 hours (the first Mini lasted 8). It also introduced a 6GB model along with minor cosmetic tweaks.

The Mini line was discontinued later in 2005 when Apple shipped the first iPod Nano, which was essentially a smaller version of the Mini (half the thickness and roughly 11 mm narrower). However, it had less maximum storage (4GB versus 6GB) and a shorter 14-hour battery life.

2005 was a monumental period for the iPod. Along with refining the fourth-gen iPod and releasing the Mini 2, Nano 1, Shuffle 1, Apple unveiled a completely redesigned fifth-gen iPod with a thinner case, a larger 2.5-inch 320 x 240 screen, and support for common video formats such as MP4 and H.264.

Compared to the year prior, 2006 was fairly mild for the iPod, though sales remained strong and represented nearly half of Apple's total revenue. It brought a new version of the increasingly popular Nano, which offered a scratch-resistant anodized aluminum casing, more color choices, a brighter display, double the storage size and a huge boost in battery life from 14 to 24 hours. The second-gen Shuffle was also released, as was a 80GB version of the fifth-gen iPod.

In an ironic twist, considering the iPod was arguably responsible for the iPhone's creation, Apple introduced the music player's greatest overhaul. Utilizing existing iPhone hardware and software, it was the first iPod to feature a multitouch display and Wi-Fi. This allowed web browsing via Safari on the iPod, as well as access the iTunes Store and YouTube. It only lacked the iPhone's cellular connectivity and services along with its speakers and camera.

The "Classic" branding for the traditional iPod didn't come until the sixth generation. Apple's latest addition shed the familiar white polycarbonate front plate for silver anodized aluminum and it abandoned the special edition models. It also had a thinner shell, a revamped user interface, and offered up to 36 hours of music and 6 hours of video playback.

Although the iPod Touch garnered much of the spotlight during Apple's launch in September 2007, the company also unveiled a promising Nano revision that scraped the rectangular shape in favor of a smaller, nearly square design. It was 19 mm shorter and 11 mm wider than its predecessor with the same storage capacities and battery life. It more than doubled the resolution from 176x132 to 320x240 and received a Cover Flow interface. Some folks criticized the third-gen Nano's lack of a touchscreen.

The fourth-gen Nano reintroduced the elongated shell, though Apple managed to shave 0.5mm off the thickness and 12.5mm off the weight despite adding a larger display, more storage, as well as an accelerometer for horizontal viewing (for videos) and the ability to shuffle songs by shaking the device.

This design was refined the following year as the fifth-gen iPod Nano gained a larger screen, a camera, an FM radio, a speaker, a pedometer, improved jack placement and a polished paint job.

As with the iPhone, the iPod Touch remained largely unchanged through its first few revisions. The second-gen device received a tapered chrome back, volume buttons and a built-in speaker. More importantly, it was the first iPod to ship with Apple's newly minted App Store.

The third-gen iPod Touch mirrored the iPhone 3GS changes, which included a faster processor and graphics core, more RAM, Voice Control support, and a model with 64GB of flash storage.

Although Apple refreshed the second-gen Shuffle several times with new colors, the series went nearly three years without a serious overhaul. Its successor shipped in March 2009 with twice the storage (4GB), a smaller body that was reminiscent of Apple's first Shuffle design, and a completely new interface.

Instead of hardware buttons on the device itself, Apple moved the volume and playback controls to the right earbud cable and introduced VoiceOver functionality for hands-free control.

The sixth generation iPod Nano borrowed elements from 2007's iteration but it delivered what the third-gen couldn't: a touchscreen. The device featured a 240x240 multitouch display and given its 1.47 x 1.61-inch dimensions, Apple cut its predecessor's camera and video playback, but retained functionality relevant to active users like the pedometer.

Meanwhile, the fourth-gen iPod Shuffle essentially served as an entry-level Nano without a touchscreen or accelerometer.

After about three years and four generations since the first touchscreen model, iPod sales began a noticeable decline -- a fate largely induced by the iPhone and competing Android handsets.

The line between portable music players and smartphones (especially the iPod Touch and iPhone) had grown incredibly blurred. Nonetheless, the fourth-gen iPod Touch represented Apple's finest offering at the time with a high-res "Retina" display, Apple's A4 SoC, as well as front and rear cameras for FaceTime and video recording.

So, which iPod models did you own over the years? Share your thoughts in the comments.