Executive Mosaic is pleased to unveil Greg Wenzel, an executive vice president at Booz Allen Hamilton, into the 2022 edition of our Wash100 — a group of the most influential government contracting figures — for his fourth consecutive induction as the 33-year Booz Allen veteran continues to steward growth efforts in the management and information technology consulting firm’s defense practice.

In a December 2021 interview with Executivebiz, Wenzel said the company is developing tools to help the Department of Defense realize its vision for the Joint All-Domain Command and Control capability.

“We’re really excited about the potential of the JADC2 concept and how it fits into the broader Joint Warfighting Construct. Over the past two years, Booz Allen has prioritized building solutions that will be imperative to bring this from concept to reality,” he said.

In his current role, Wenzel oversees a business unit focused on supporting the Army in efforts to take digital, analytic, cyber and engineering platforms to the country’s soldiers. He has worked with defense clients over the course of his career at the company to carry out net-centric information technology modernization projects. 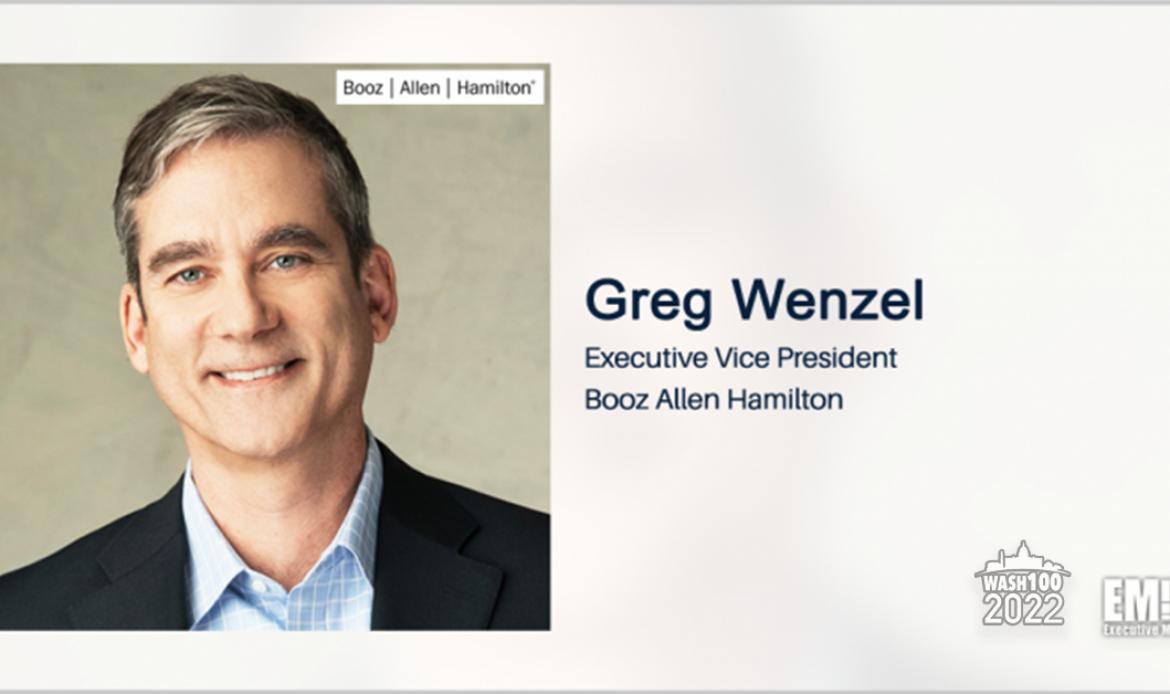 In a September opinion piece for C4ISRNET, Wenzel said that DOD should collaborate with technological innovators to create a modern warfare environment that addresses “flexibility, adaptability and scalability” under an open integrated network.

“Warfare continues to undergo rapid transformation, and JADC2, if developed successfully, will be an unmatched initiative in helping warfighters prevail against near-peer adversaries. As the landscape continues to evolve, the system architecture that underpins this critical pillar of U.S. defense must be built on design principles that encourage innovation and speed to need,” he wrote.

Also in 2021, Booz Allen announced it will develop 5G-enabled prototypes of virtual training and spectrum sharing systems for Joint Base Lewis-McChord in Washington and Hill Air Force Base in Utah as part of DOD’s $600 million experimentation and testing program. For one of the two military projects, the company aims to deliver an Army-owned prototype based on the firm’s Digital Soldier offering to help maximize soldier performance.

“Increasing warfighter effectiveness and reducing potential loss of life require a deep understanding of the U.S. Army’s mission, expertise in the latest technologies, and access to cross-sector partnerships,” Wenzel said of the company’s digital battlefield vision.

In the fourth quarter of 2021, Booz Allen spun out its SnapAttack and Modzy commercial product businesses focused on cloud-based cybersecurity and artificial intelligence, respectively, and senior executives have called the spinout transactions a part of the company’s innovation strategy.

Executive Mosaic extends its congratulations to Wenzel and the rest of the Booz Allen Hamilton organization on their Wash100 Award.

About the Wash100 Award

This year represents the ninth annual Wash100 award selection. The Wash100 is the premier group of private and public sector leaders selected by Executive Mosaic’s organizational and editorial leadership as the most influential leaders in the GovCon sector. These leaders demonstrate skills in leadership, innovation, reliability, achievement, and vision. Visitors to wash100.com can sign in and vote for the executives they believe will have the greatest impact on government contracting in the coming year.

Sign Up Now! GovCon Wire provides you with Daily Updates and News Briefings about Wash100