Not being tied to sitting at the computer feeding photos in to the scanner meant I could digitise the photos whilst watching a movie, and thanks to iCloud's

feature, all of the pictures were automatically copied over onto the main computer, ready to be rotated and tweaked if necessary. By the time the movie had finished I had snapped about 150 photos, and then the iPhone's battery gave out.

When I went to the computer to check the photos, I found out that some of that processing time in the official app was actually 100% necessary. Most of of the photos taken with Apple's Camera app had a noticeable glare at the left and right edges, caused by the LEDs used to illuminate the photo. The ones taken with the official app didn't seem to have any glare, so I can only assume that the app reduces this glare automagically. So I trashed the whole lot and started again the next evening - with another movie, of course! You can see the glare/dark area on photo 4 of the comparison pictures above (click to embiggen).

Atoms are small, water resistant, compatible with Legos, and have mounting holes so they can be attached to bigger projects.

The unit also comes with a 35mm negative and slide adapter, which works almost exactly the same way. You position the negative in the holder, then close it up and it's held tightly shut by magnets. This time, the holder slots into the box above the LEDs, which then shine through and reflect off of the white base to illuminate the negatives. Selecting the negative option from the app automatically inverts the images and crops the photo to the right size,

so obviously this results in a lower resolution picture than the photo option (1491x966 as opposed to 3168x2352). The auto colour correction kicks in again, but seems to have a bit of trouble detecting black and white negatives, as it turned most of mine red! 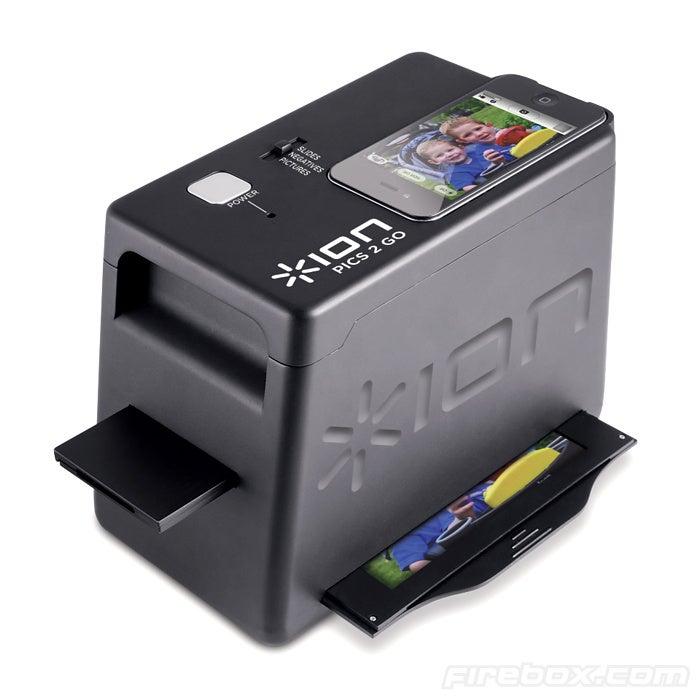 It's certainly a much quicker process than scanning the photos, and gives good enough results for viewing on your computer or TV, and the fact that the lighting and colours aren't 100% accurate gives the pictures a subtle Instagram kind of feel, which is fine for me as it adds a retro touch to photos are mostly from the previous century anyway! Although, having said that, I did keep some of the pictures to one side that I felt were worthy of a proper scanning. What I wasn't really prepared for though was the extra time I spent reminiscing about the content of the photos - my university graduation, rebuilding my original Beetle, high school trips, photos of my Mum before she died and others of my Dad the same age as I am now. It made me wish I hadn't been so lazy when I first put all those photos into storage, and what gems I had lost in the boiler leak. We're always saying you should back up your computer and digital files regularly and often, but the same should be said for your analog life too.

The iPics2go is relatively cheap at around $60 (

currently has it for only $44), much better value to my mind than its big brother the

, but I foresee a good deal of eBay action for them as it's not something you'll need to keep around once you've snapped all your photos.

Thanks to Ion for supplying a review unit