A friend texted me recently because her daughter’s class had a coronavirus outbreak and my friend had some questions about COVID-19 testing.

Testing has been on lots of other people’s minds and in the news lately, too. President Joe Biden announced recently that insurance providers must reimburse people for at-home coronavirus tests, and millions of tests will be available for people who don’t have insurance. Some people are making testing part of their routines before holiday gatherings.

Yet COVID-19 tests aren’t easy to come by everywhere. Consumers have complained that their pharmacies are sold out and that testing centers in some places have long lines. And even if you can get your hands on a test, many folks — like my friend — have questions. In particular, she wanted to know if her daughter’s recent vaccine shot would interfere with the results of her home test.

Here are some answers to that and other queries.

What do COVID-19 tests measure?

There are two major categories of diagnostic tests you might encounter: antigen tests and nucleic acid amplification tests, better known as PCR tests. Both can determine whether you have a current infection with SARS-CoV-2, the virus that causes COVID-19. You can find a list of tests available in stores or at testing sites in the United States here. (Antibody tests aren’t diagnostic tests: They can detect evidence of past infections, but not current cases.)

The PCR (polymerase chain reaction) test determines whether there is viral RNA in the swab or saliva sample being tested. Those tests are the ones you would encounter most often at the doctor’s office or other testing centers, and some at-home tests allow people to swab themselves and mail the samples to a lab for PCR testing. Those tests work by first converting any of the virus’s RNA in the sample into DNA. If any of the viral genetic material is present, then multiple rounds of copying short pieces of certain viral genes should produce a signal. That would be a positive test result. 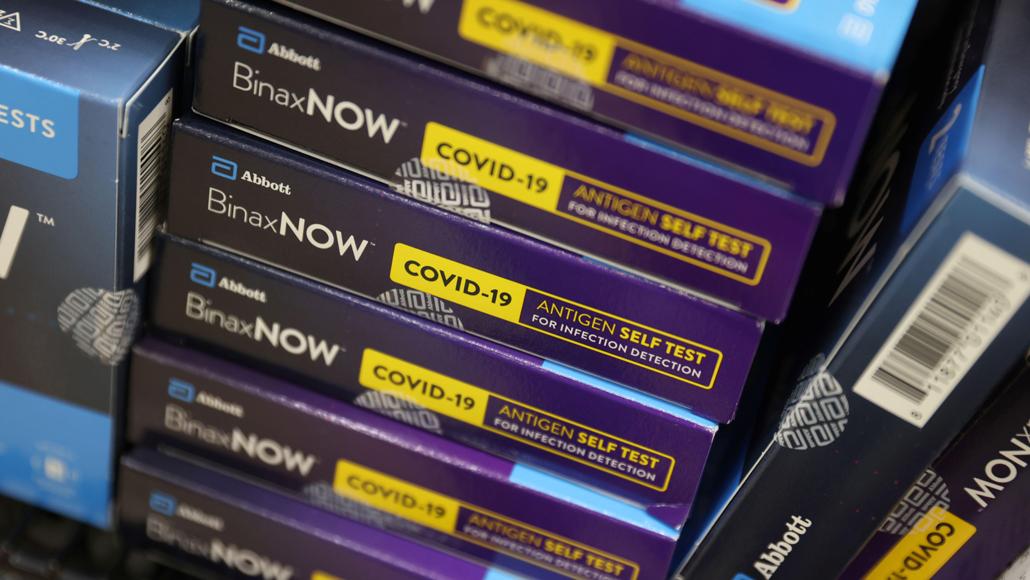 Many of the at-home kits are antigen tests, which probe for certain viral proteins. Most of the rapid antigen tests look for the coronavirus’s nucleocapsid, or N protein. That protein helps package the viral RNA.

How accurate are the tests?

Both types of tests are accurate but have strengths and weaknesses. Because of their round robin copycatting, PCR tests are very sensitive and can pick up small amounts of viral RNA, including before a person becomes contagious. The downside is that the test can still pick up RNA debris even after people have ceased making infectious viruses, potentially making people seem contagious when they aren’t.

At-home kits aren’t as sensitive as the PCR tests, but “the rapid antigen tests are really great, particularly if you’re symptomatic, to determine whether you have COVID at that moment,” says Gigi Gronvall, an immunologist and senior scholar at the Johns Hopkins Center for Health Security. “They rival PCR for accuracy for that time” when people are symptomatic and most likely to be contagious to others.

But a negative test result doesn’t necessarily mean that you aren’t infected. It just means that the test didn’t detect the virus at that time.

“All tests are a moment in time,” Gronvall says. “There’s always going to be a moment like when you’re watching a sunrise when the light hasn’t yet come above the horizon. It’s not like the sun isn’t there. … You won’t know the day or the hour when the virus is starting to make copies of itself,” she says. For that reason, experts advise doing several rapid antigen tests a few days apart.

That’s something to keep in mind when deciding when to test over the holidays, too. Do a rapid antigen test before you go to a party to get some assurance that you’re likely not contagious to others right then. But if you’re worried that you were exposed to the virus during the celebration, “testing as soon as you get home from the party isn’t going to do much good,” Gronvall says. Health experts advise waiting five to seven days after exposure to take a test, but people are often testing positive within three to five days with the delta variant, she says. It’s unknown how long it might take to get a positive result if infected with the omicron variant.

Headlines and summaries of the latest Science News articles, delivered to your inbox

Thank you for signing up!

There was a problem signing you up.