Location： Home / Technology / Does Frank Ocean Have a Prada Collab on the Way?

Does Frank Ocean Have a Prada Collab on the Way?

When it comes to Frank Ocean news, every morsel is a meal. In a

new interview with the

, just ahead of launching its collection of diamond-encrusted, candy-enamel pieces this past weekend. Images from the Homer lookbook contain shots of pastel nylon Prada bags, plus Ocean himself wearing a classic Prada hooded anorak—a preview, it seems, of an upcoming collaboration with the brand.

“I really admire both Raf and Miuccia,” he told the

. “It’s a treat to see them play together and show us how they collaborate. I have had more conversations with Miuccia than Raf. I find her really warm and sharp-witted. She is so open-minded. Nothing about her feels jaded.” But this isn't Ocean's first go-round with the brand. The musician

in Prada’s spring 2020 campaign, nearly a year after he wore a black Prada anorak and trousers to the camp-themed Met Gala in 2019. He

shot the Gala for 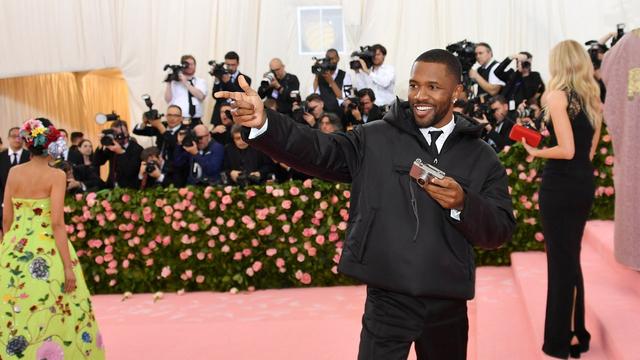 that year, and in his all-black look—seemingly drab, but denoted as luxury to those in the know by its signature triangular logo—he blended in more with the camera crews on the edge of the Pepto-pink carpet than his fellow celebrities on it. (Indeed, those photographers were the subject of Ocean’s first shot in the photo set.) While he hid his face behind a silver point-and-shoot on the carpet, his look—a coyly sober contrast, given the spectacle—

. We don’t see Ocean much, but when we do, there’s a good chance he’ll be in Prada.

At this point, Ocean—not unlike, say, Rihanna—is carving out a career away from music

as a tastemaker defined by a keen eye. The Frank Ocean proposition is that, when you buy in, you're getting something exquisite. As per usual, he’s forging his own

, “and I keep things to myself. But I’m perfectly happy wearing $3m worth of jewellery and going to the studio, or for a walk in the desert.” He’s opting into, while also pushing up against, established notions of luxury and access. It's an intellectual pursuit that aligns with Mrs. Prada’s,

sometimes noted for her leftist past

, whose vision for her eponymous brand has led her to be wary of celebrity collaborations before. (Ocean may have even been thinking of the luxury brand when he named his own line, choosing Homer “[m]ostly because it’s five letters and the dotcom was available.” Five letters, two syllables—nominally, Prada’s a cosmic predecessor.)

It’s worth noting that in the Homer lookbook, the Prada pieces bare no signs of collaborative branding—just the signature Prada triangular badge, even though they’re shown underneath a header that puts Prada logo’s side by side with Homer’s. Frankly, they just look like Prada stuff. It feels very Frank to put forth a status collab sans any outward hype-magnifying

insignia—but it also feels very Frank that, until we get an official look at the designs, Homer x Prada will remain a mystery.