Fresno State grad finds his voice; now helping others find their own

When John Eagan was 15, panic struck. The right side of his face was suddenly paralyzed. Unable to speak, the muscles in his face immobilized — he wondered if he was having a stroke.

Then, he remembered a condition his mother had that caused facial paralysis: Bell’s palsy. While many people fully recover from this nerve condition in weeks to months, some take longer, or never fully recover.

For Eagan, the onset of this condition changed his life overnight. The right side of his face was visibly drooping, and he lost control of his lips and mouth. The most profound change, however, was losing the ability to communicate. In the prime of his adolescence, Eagan could not speak, and yet he faced an unending torrent of stares and questions about his condition that he literally could not answer.

“It turns out nods and ‘Mm-hmms’ can only get you so far in a conversation,” Eagan said.

It took Eagan years of hard work to relearn how to speak — retraining muscles that never regained their full nerve function. Even now, the experience haunts Eagan. While his condition is now almost impossible to notice, any hiccup in his speech mentally sends him right back to those days of initial struggle.

“The occasional slip-up in my speech or inability to say a word instantly makes me twitch and scrunch my face to make sure everything’s still moving,” he said.

While the adversity Eagan endured was challenging, he said it also helped positively shape his future — motivating him to truly find his voice during his time at Fresno State.

“This experience gave me a greater insight into the importance of communication through the frustration I felt when not being understood,” he said. “Personal expression and talking with others is now a significant drive in my life as I try to make up for all the lost ideas and topics I never got to communicate. My time at Fresno State and within the Computer Science Department has given me a great amount of opportunities to discuss things with my peers and build my feeling of confidence when communicating.”

Eagan will graduate from Fresno State this May with a bachelor’s degree in computer science. He achieved a 4.0 GPA each term and has been on the President’s List throughout his four years at Fresno State. His studies culminate with the College of Science and Mathematics commencement ceremony at 5 p.m. Friday, May 20, at the Save Mart Center.

But for Eagan, finding his voice here has been his biggest win — and he’s using computer science to help others find theirs. 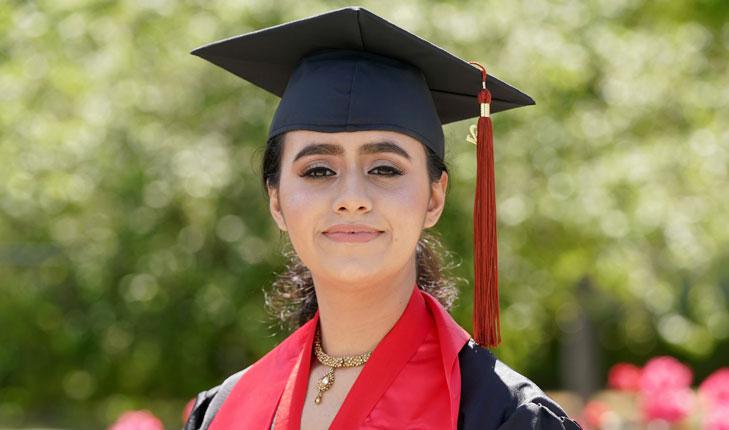 After taking vocal lessons as an undergrad, Eagan was able to discuss group projects with his peers and present their work to larger audiences. Eagan’s project group worked to create a new algorithm for matrix multiplication that can use a computer’s graphics processing unit to accelerate calculations. He co-authored a scholarly paper on the project that he’s hoping to have published. He also recorded a presentation of the group’s work for the High Impact Practices Symposium on campus, “something I never thought I would be able to communicate a few years prior,” he said.

At the same event, Eagan’s group presented its website (Word of Mouth) that is designed to connect employers to potential contractors, self-employed people and local businesses through personalized profiles and reviews. The project won a certificate of Distinguished Presentation at the symposium.

The key component is Eagan’s natural language processing model that uses machine learning to determine the sentiment of reviews as positive, negative or neutral.

“Without even knowing what someone exactly said, you could still understand their general sentiment and what they thought,” he explained. “This exploration of machine learning and language processing opened my eyes to the possibilities of building and enhancing communication between people using computer science and human-agent teams.”

Eagan’s professors were impressed by his work and dedication. Dr. Shih-Hsi “Alex” Liu, professor and Department of Computer Science chair, noted that Eagan “is a diligent student with a good academic ethic. His academic performance is in the top 1% in the class of 2022 … Under [Eagan’s] leadership, his team always finishes all aspects of software development in outstanding quality and acts as a role model for other teams to follow.”

Liu also notes that Eagan’s work is on the cutting edge, with his latest project integrating a solution for dealing with art theft using NFTs (Non-Fungible Tokens), the first project in the department to do so.

While communication is still sometimes a challenge for him, Eagen is committed to finding ways to help people communicate more effectively through technology.

“Communication is still hard for me,” he said. “I never know what exactly to say or how best to phrase my thoughts, but I now see this as a positive contribution toward my understanding of how people struggle to communicate and how computer science can fix an awkward silence.

Celebrating the Class of 2022

In the coming days, FresnoStateNews.com will highlight stories of inspiring students who will be graduating this spring. Commencement ceremonies for the University’s eight colleges and schools along with several affinity celebrations will take place May 20 and 21. Visit commencement.fresnostate.edu for more details.