‘I dropped out of university to pursue my passion in tech’

Mustapha Abubakar Gajibo is a young entrepreneur with knack for technological development.Determined to showcase his skill in technology, the Kanuri-born prodigy has blazed a trail by producing electric vehicles. In this interview, he explained how he achieved this feat and his plan to export the vehicles to African countries, among other things.

How would you describe your early days in life?

I am a Kanuri from Gajibo ward in Dikwa Local Government Area of Borno State. I am 29 years old. I was born in Sokoto State.

I gained admission into the University of Maiduguri in 2012, but there was a lot of drama before I was given my dream course.Initially, I was offered General Agricultural Science, but I didn’t like the course because since my secondary school days I have had a passion for technical drawing and innovation.My first choice was Electrical Engineering but I wasn’t offered the course. However, I was able to get a change of course.The only department that was ready to accommodate me was Mechanical Engineering, where I proceeded till the third year with so much interest in renewable energy, innovation, as well as technical creativity.

I developed much interest in solving problems in electricity, but this created a lot of problems for me on many occasions. I missed classes, tests and examinations, which brought so much setback to my studies. However, I remained committed to my passion for renewable energy, so much that when I got to 300-level, I decided to go for a renewable energy programme full blast. After relinquishing my education for it, I came up with an idea of having a registered company as an entrepreneur. I registered my company in 2014 but had several teething challenges, which I later overcame.

How did you feel when you left university education due to your passion for renewable energy programme?

It was a very tough decision. In fact, some of my close friends told me that it was madness on my part. Initially, my parents too were not happy because I am from a home where everybody went to school.

Many people also told me that I had made a big mistake. Even the head of our department told me that I had chosen a wrong path. As at that time I had a project at the Federal University of Technology, Owerri, to power the e-library. So there was a strong resistance from my family. But my dad always believed in what I was doing when he saw the zeal in me. He believed I could succeed. So I didn’t feel bad. I was optimistic and enthusiastic about my decision and there was no going back.I believed strongly that I would excel in my preferred career.

However, I decided to return to school recently. I have enrolled into the National Open University, Maiduguri Study Centre so I can have enough time to research and do other things. 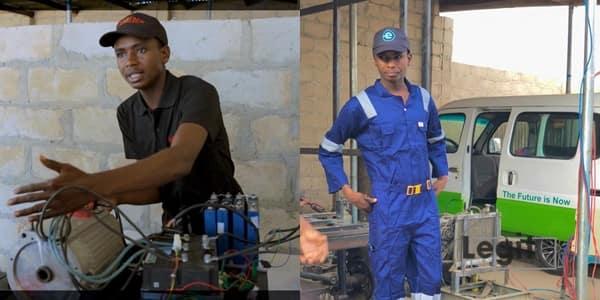 What have been your challenges over the years?

One of the challenges was the Boko Haram insurgency. As at that time, many people were relocating to another city because of the activities of the insurgents. There was chaos. The state was not friendly at all for youths. Things were very bad. There were so many challenges. There were times we would start work, and suddenly, there would be explosions and roads would be closed for days. Sometimes we would procure equipment but couldn’t deliver until weeks later. In any case, we learnt a lot of lessons from the challenges. They gave us a lot of training.But we didn’t give up on our dreams. We knew that if we did, nobody would come and help us to rebuild.

What spurred you to venture into production of electric vehicles?

I always think of how to solve problems, how to create new things, design and research. The city is getting overcrowded due to displacement by insurgency. We have problems with the mass transit system. That is why we decided to construct solar minibuses to ease mobility problems.

Also, economic values are incomparable with a normal gasoline bus.We identified potential problems. At the same time, we came up with electrical minibuses, which can cover 150 kilometres on a single charge. We designed the vehicles to be charged with solar power because this is the future of this country.

So, we should start working towards developing software and applications and not just government jobs. We have provided 10 buses and tricycles as the federal government is planning to remove fuel subsidy.This may attract an increase in transportation fare, which may cause economic hardship to the people.So, I decided to produce a seven-seater minibus, which is cheaper and durable.

In every sector of the economy of the state, some problems need solutions. But we should not wait for government alone to solve them. In solving the problems, the youths should take the lead, just the way I was able to identify problems in the power and transportation sectors and try to solve them. We have been able to design and light up almost all mega schools, health facilities, street lighting, as well as in the rural areas. We have also installed many solar boreholes in MMC and also installed 80 kilowatt systems in Owerri. It is one of the largest e-libraries in the country. We developed some software to aid our operations. From all these, we have created jobs. I have 13 staff and several casual workers.

Where did you get funds to bankroll the project?

We did not get any financial help from anybody. We started investing in the company ourselves, right from inception. When we started installing inverters, solar streetlights, powered boreholes and other things, we made a lot of sacrifices. When profits started coming in, the company didn’t spend them. Instead, we reinvested immediately. That was how we were able to sustain it till the level we are today.

What is the secret of your success in technology?

We try to keep on improving with better technologies. This gives us an edge over others. The improvement begins with our inventions to research where we came about lithium-ion batteries, which have a lot of potentials.One of the potentials is making electric vehicle a possibility in Nigeria. So, we see this as an avenue to help the community, the society and Nigeria to achieve its pledge to the Paris Accord, which was first signed in 2016.

What is the cost of the vehicle?

We cannot give the cost now because we just started the vehicle project. It is still a prototype and we don’t have a full workshop that could build an efficient vehicle. So, if I mention the cost now, it will not be realistic in the long run. But it is about 60 per cent higher than normal vehicles.

Where do you think the company will be in the next 10 years?

Ten years is far.It should be in the next five years, to be precise. We will plan to start exporting our vehicles. We want to put Nigeria on the map of a major driver of electric vehicles in Africa and world over. We have a lot of plans. If the government is ready to support us, we shall make everyone proud and the country great. We are hopeful of a favourable policy from the government. We are going to make Nigeria an exporter of electric vehicles.

What is your message for the youth on how to be relevant to themselves and the society?

Our youths need to change their mindsets. About 90 per cent of students in higher institutions go there to acquire certificates, and thereafter scout for jobs that are not easy to get.They should learn to get something done. This is the way forward for our country because the world is changing.There are no more jobs in the public sector as the world economy is being driven by the private sector.

If I can employ 13 members staff and dozens of casual ones and we have 100 young people in Borno State that dothe same, then we will be talking about empowering or employing 1,000 people from the streets.

We need young people who are problem solving-oriented.If we can get this right, it will not only improve security challenges facing the countrybut also reduce the billions of naira that governments are spending on insecurity, especially as Boko Haram and other criminal elements depend on the youth to sustain their criminal activities.

It is high time government at all levels started supporting young entrepreneurs that are actualising their dreams, especially by introducing favourable policies, as well as stable exchange rates. We need favourable government policies that would help indigenous companies to grow and reduce the unemployment rate in the country. For example, China subsidizes electric vehicles. Anybody that buys electric vehicles in China has 30 per cent less cost. This speeds up the transition from petrol or a gasoline-powered vehicle to electric mobility. We need such policies in Nigeria.