Infineon’s management have created a group that both enables and benefits from several important global megatrends that are just starting but which are likely to last for decades. From the electrification of transport, 5G telecommunications and the growth of the much-anticipated Internet of Things to the energy transition where Infineon supplies semiconductors to major wind-turbine and solar-inverter manufacturers, such as Vestas (OTCPK:VWDRY) and Siemens Gamesa (OTCPK:GCTAF), the German technology company is, like ASML, a crucial player in the global semiconductor supply chain, whose stock is undervalued, despite strong momentum in the sector.

More than 40% of Infineon’s sales are derived from the automotive sector where semiconductors are essential components for much of a car’s electronics, such as in electric power steering or for the deployment of airbags. Auto manufacturers are constantly adding new semiconductor hungry features like advanced driver assistance systems, often driven by the need to meet increasingly advanced regulatory mandates. This is boosting the demand for chips.

With its €8.3 billion acquisition of US semiconductor maker Cypress completed last year, Infineon has become world’s number one automotive semiconductor manufacturer with a 1/8 market share. The company’s strategy is to sell to tier 1 auto component makers such as Bosch and Continental, rather than the auto OEMs directly.

Traditionally, Infineon, a member of the German DAX blue chip index, could be considered a cyclical stock, as its revenues would follow the auto industry’s ups and downs. Now however, the long-term structural transition from the internal combustion engine to electric vehicles means the demand for its chips is set to smoothly grow for the foreseeable future. Indeed, Infineon estimates that the average semiconductor content per electric vehicle is $834 compared to $434 for an internal combustion engine vehicle. Going one step further into the future, the company estimates fully autonomous vehicles would require perhaps $1,250-worth of semiconductor content.

Because of this, The Global Investor thinks semiconductors in general and Infineon in particular is one of the best ways to get exposure to the growth offered from the rise of the electric vehicle megatrend. Given Infineon is the top power semiconductor player worldwide it has been really benefiting from the current supply and demand trends in this space, with the recent acceleration of electric vehicle adoption in Europe and China in particular driving growth. 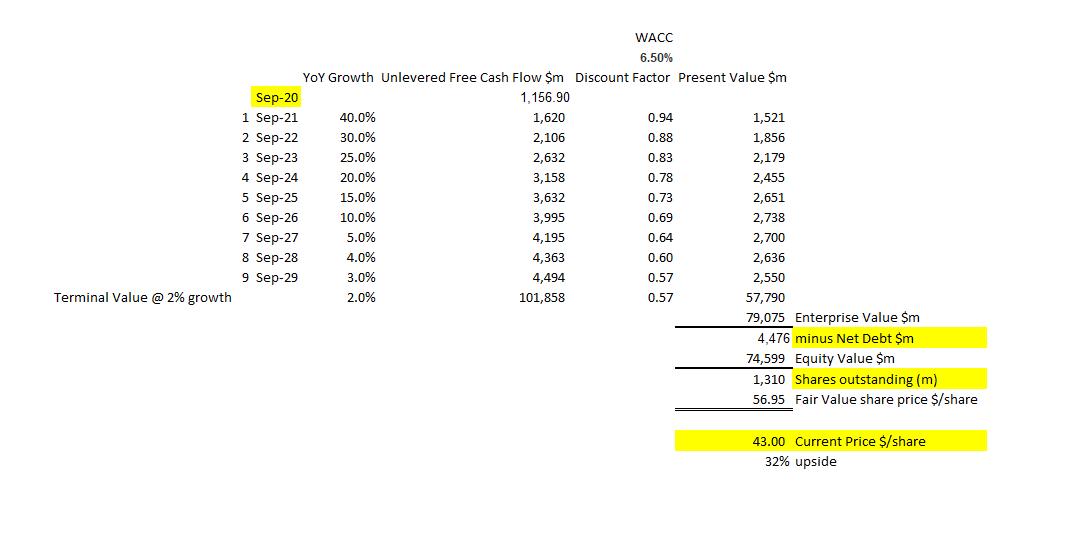 Infineon’s semiconductors are being used by electric vehicle manufacturers including Volkswagen whose VW ID.3 has become one of Europe's top-selling electric vehicles and the popular Chinese brand Nio (NIO).

The global automotive sector has recently been hit by a chip shortage, forcing several manufacturers to cut vehicle production. Ford (F) said in early February that it might lose as much as 20% of its Q1 production because of this.

As automakers usually place their chip orders 6-9 months in advance, recent chip deliveries would have been ordered at the height of the Covid-19 pandemic last year. Underestimating their own together with the boom in consumer electronics, laptops, TVs, white goods etc., saw chipmaking capacity fill up and carmakers unable to scale up their orders and with demand outpacing supply, chip prices have gone higher. This was somewhat foreseen by the market and helped drive the PHLX SOX Semiconductor Index to more than double in value in recent months.

What this means for Infineon, as well as rival STMicroelectronics (STM) is that their fabs are fully utilized and they can achieve better pricing. The March quarter is often the period when auto makers try to negotiate lower prices, but with demand outstripping supply, Infineon has better pricing power this year.

Not only is pricing better, but volumes are up too. Strong demand for electric vehicles semiconductors meant Infineon’s automotive revenue rose by 10% year on year in Q4, to €1.2 billion. Infineon’s “book-to-bill ratio” is currently 1.5 meaning that 1.5x more orders were received than filled, indicating very strong demand.

Utilization of Infineon’s fabs hit mid-90% in Q4, and margins came in at 16.1%, significantly higher than the 7.9% achieved a year earlier. This chip bottleneck will likely continue for a few more months at least and due to the fab utilization remaining high, The Global Investor expects that Infineon’s automotive margin will achieve at least 15% this year.

As Infineon’s fabs in Europe scale up production, group margins should continue to rise, making Infineon on track to achieve its medium-term target of group adjusted operating profit margins of 19% by 2023.

Considering the improving outlook for its automotive division, Infineon raised its guidance from €10.5 billion to €10.8 billion of revenue for the 2021 financial year. As analysts upgrade their own forecasts, this should prove bullish for the stock. The Global Investor thinks Infineon’s guidance might prove conservative because as the group’s high level of orders convert into revenues, Infineon may need to increase its guidance one more.

Another bullish sign, at least for growth investors, is that Infineon announced an increase in full-year capex to €1.5-1.6 billion, to bring forward both production and capacity in a new chip factory in Austria. Also, last year’s Cypress purchase has increased Infineon’s presence in chips for the Internet of Things. While that acquisition did cause a net cash position to turn into €4.3 billion net debt, Infineon’s strong free cash flow generation since has brought this down to €3.4 billion. The Global Investor expects 1.1x net debt/EBITDA by year end, meaning the group does have a strong balance sheet.

Another driver of earnings momentum should come from Infineon’s efforts in silicon carbide or SiC. This is said to be the next generation of chip technology because of higher efficiency and greater power density. While STMicroelectronics is the leader in SiC automotive chips currently with Tesla (TSLA) an important customer, Infineon’s dominant position with other OEMs means that as they switch to SiC chips, Infineon’s market share of the SiC market for automotive could increase from about 4% this year to perhaps up to 20% by 2025.

The current pandemic has clearly demonstrated the fragility of worldwide supply chains and this has accelerated many countries’ desire for greater sovereignty of their needed technologies.

While there is a risk that China rushes to improve its chip self-sufficiency as a reaction to trade wars with the US and in the very long term this might impact Infineon, this will probably take several years to get to a competitive level with Infineon, thanks to Infineon’s high level of quality and reliability.

In the meantime, any trade war involving Europe would certainly be a risk for Infineon’s exports. Indeed, even the impact of the US-China trade tensions caused a downturn in the global semiconductor market in 2018, which didn’t escape Infineon’s stock price. So a repeat of this is always a risk.

But the technology nationalism can also be an opportunity for Infineon. Germany’s economy minister, Peter Altmaier, hinted earlier this year that the European Union could invest €50 billion in the European chip industry, which Infineon has publicly welcomed as increased state support should spur increased demand for its chips.

Other risks include the recovery in automotive demand and electric vehicle demand growth take longer to play out than expected, or that the boom in consumer electronics seen last year has simply brought forward future consumption meaning chip demand from consumer electronics would be lower than expected going forward and capacity utilization of fabs reduces and therefore chip prices enter a bear market.

The trend is your friend

During the semiconductor downturn of 2018/19 Infineon’s stock price was under some pressure but this has now reversed and the stock has been firmly trending up over the past year and is up by over 60% in that time. With the shares trading at about 34x forward earnings (non-GAAP) they are not cheap, but growth stocks never are, and it is slightly cheaper than STMicroelectronics which trades at 35x on the same basis. Meanwhile the iShares PHLX Semiconductor ETF (SOXX) trades on 54x trailing 12-month earnings.

The Global Investor thinks 34x forward earnings is very reasonable given the growth on offer and the low interest rate environment. From a discounted cash flow perspective, we can easily make the case for 30% upside, given the high double digit growth rates expected in the next few years. With 2021 on course for 40% free cash flow growth already and fading that growth down over the next 10 years, using a 2% terminal growth rate and a 6.5% weighted average cost of capital, we get an enterprise value of $79 billion, an equity value of $75 billion, which translates into a target share price of $57 per share, compared to the ADR price of $43.27 at the time of writing.

With strong price action momentum and a reasonable valuation then, you could be forgiven if you were like Alec Baldwin in The Departed “Microprocessors… Yes, those… I don’t what they are, you don’t know what they are, who gives a…” and you still wanted to buy. Luckily, I do know what they are, and I see the strong growth driven by the coming megatrends, which makes me very bullish on Infineon Technologies.

Editor's Note: This article discusses one or more securities that do not trade on a major U.S. exchange. Please be aware of the risks associated with these stocks.