When Ryan Motta watched the first “Iron Man” movie with his dad, he decided he wanted to build something like Tony Stark’s Iron Man suit.

As a senior engineering major at JMU, he did.

For their senior capstone project, Motta and three other students were tasked with creating an interactive biophysics machine. In response, they designed and built a 7-foot-tall Iron Man model the group uses to teach elementary school students lessons in science, technology, engineering and mathematics, specifically about brain signals and muscle movement.

“Our goal was to show them the fun side of STEM and all the fun, creative elements of it so that they would be more inspired to want to seek out those extracurriculars,” Motta said.

The team has four members, all of whom are senior engineering majors at JMU. Lauren Dargan serves as the team leader, Will Sullivan works as the project manager, Jenna Lindsey handles biology components and Motta oversees the STEM learning aspects.

Several years before the formation of the capstone team, Callie Miller and Nathan Wright, the faculty advisers for the project, brainstormed the initial concept of a project that could be used in community settings. They won a grant from the National Science Foundation to fully fund the development of their project, and when the team of students assembled, they tasked them with narrowing down the work they wanted to do.

“We wrote it relatively broad,” Wright said. “We said, ‘We have this idea, this big idea, and we’d like you to really get down to the specifics of it.’”

The members of the team, juniors at the time, were selected in September 2020 based on their interest in working on a biophysics machine that could be used to teach an interactive lesson and be presented at the Rockingham County Fair this past August.

Lindsey said the team had to “work backwards.” They started by pinpointing the lesson they wanted to teach — how nerve signals sent from the brain control muscle movement — and then brainstormed characters they could make into a physical model to teach it. 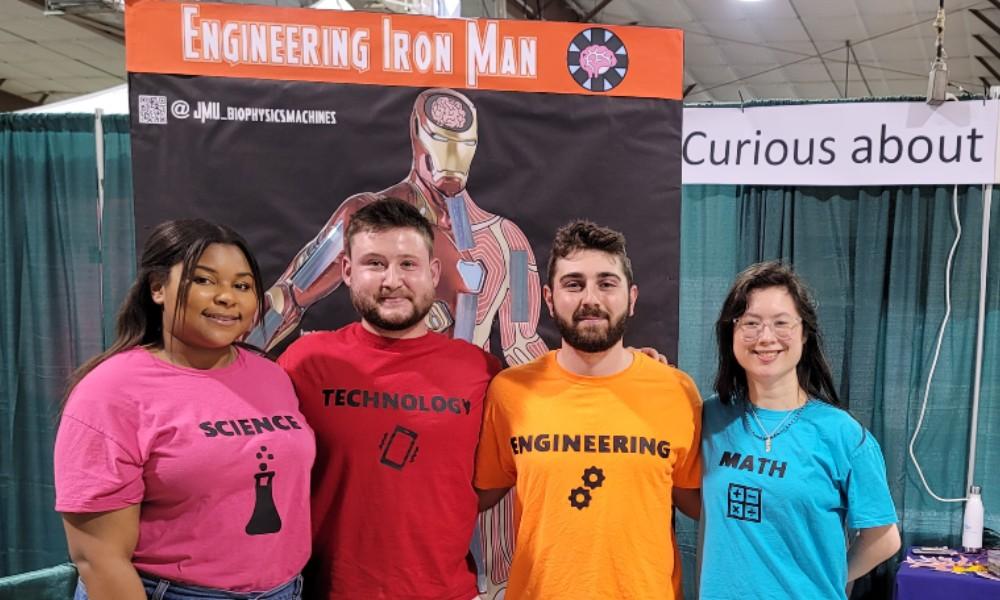 The team then sent out a survey that was circulated throughout the Rockingham County school system to determine which character would be most appealing to fourth through sixth graders. Although other possibilities included the robot Baymax from the movie “Big Hero 6” and the prosthetic hand that Luke Skywalker sports in “Star Wars,” Motta said Iron Man won by a landslide.

“We saw it wasn’t just one heavy demographic that wanted him,” Motta said. “We had a good spread of genders, ages, that all seemed to be behind wanting to learn about him.”

Throughout their junior year, the team developed lessons to teach with the Iron Man model. Iron Man serves as an introductory lesson that visually displays the nervous system and helps students understand how brain signals are communicated throughout the body. The second exercise uses a board display to illustrate what it looks like for signals to pass through a cell membrane; the third — which is partially finished and still in the development for now — will be an electric prosthetic model of a hand and forearm that demonstrates how signals sent through muscles create movement.

The summer before their senior year, the students began building Iron Man. The model is an illustration painted on a sheet of plywood that’s cut away to show transparent tubes where “brain signals,” represented by plastic balls, travel down the body. Systems of wires and motors control the balls’ movement, which can be triggered by pressing buttons on the front. Motta’s girlfriend, Shea Burch, pitched in and combined images she found online to develop the visuals that show half of Iron Man’s body drawn in the character’s red and gold suit of armor and the other half as the body’s muscular system. When the team uses Iron Man in the classroom, kids can press the buttons on the front of the model, which prompt balls to roll down the plastic tubing to Iron Man’s hands or feet.

The Iron Man model was the primary deliverable for the team’s project, so they had to have it completed by the time the Rockingham County Fair began in August. The team finished over the summer and set up a booth at the fair, where it spent eight hours over six days to show local elementary school students their presentation.

“It was very fun seeing everyone interact with Iron Man,” Lindsey said. “You see a kid from across the room, and their eyes light up and [they] try and drag their parents over.”

About 2,000 kids interacted with Iron Man over the course of the fair, Motta estimated. The team handed out surveys to learn what worked and what could be improved.

“A lot of kids left … saying, ‘I learned something new, I really enjoyed this, I wish my school did this,’” Motta said.

Dargan said it was meaningful to be able to be at the fair with Lindsey as “role models” for the girls who attended. The team’s goal is to encourage younger students to build similar projects. Giving kids that kind of inspiration is “heartwarming,” Lindsey said.

“STEM is hard,” Motta said. “These are very intricate things that we’re building and designing, and a lot of failure goes into making them. But it’s the mindset of teaching these kids [that] if you’re willing to go through that sacrifice, you’ll come out with things on the other side that are that much more rewarding.”

The team also took Iron Man to a fourth grade classroom at Mennonite Elementary School, where they used a bingo exercise to teach the students scientific vocabulary, with terms like “battery,” “biology” and “nucleus.”

Bethany Gibbs, a teacher at Mennonite Elementary whose class of fourth graders hosted the Iron Man team, said this type of STEM project was helpful for her students because it allowed them to interact with the scientific subjects they were learning.

The team still has one more semester to perfect their lessons and models. After that, their work will be passed down to a team of JMU junior engineering students who’ll use the Iron Man model as inspiration to create new lessons.

For now, Motta, Dargan, Sullivan and Lindsey are staying busy as they prepare to present Iron Man in at least one more classroom during the spring semester. They work 10-12 hours a week to finalize the lessons and models.

Miller and Wright both said the Iron Man team is positioned to accomplish a lot in the spring.

“They’ve set the bar very high,” Miller said, “and my hope is that this translates to the junior team … I think that peer-to-peer mentoring is going to be key for establishing this legacy of really quality products.”