Kailh’s Silent Box Red switches are some of the lightest switches you can find for your keyboard. That makes for fun gaming and less exhaustion, but accidental inputs too.

No tactility for heavy typists

Whether you’re a speedy gamer, lightweight typist or heavy-handed with a habit of bottoming out, there’s a mechanical keyboard switch these days for everyone. Selecting or making the

or your next productivity workhorse is like picking the right dance partner. The keys have to be able to keep with your fingers, without overpowering or boring them.

The newest switches from

are for those who don’t want the clicky showmanship of something like a Cherry MX Blue or even the tactility of Cherry MX Browns. Instead,

Let’s talk about the pink elephant in the room. These switches’ stems aren’t red, as the name implies. More honestly, they’re a bright pink the shade of a cartoon pig. Like many mechanical keyboard switches, they feature a plus-shaped crosstem, allowing them to fit standard keycaps that would fit on traditional Cherry MX ones. I used the Kailh Silent Box Reds with ABS double-shot injection keycaps from

for most of my testing, for example, and I also fit

PBT double-shot keycaps on them. 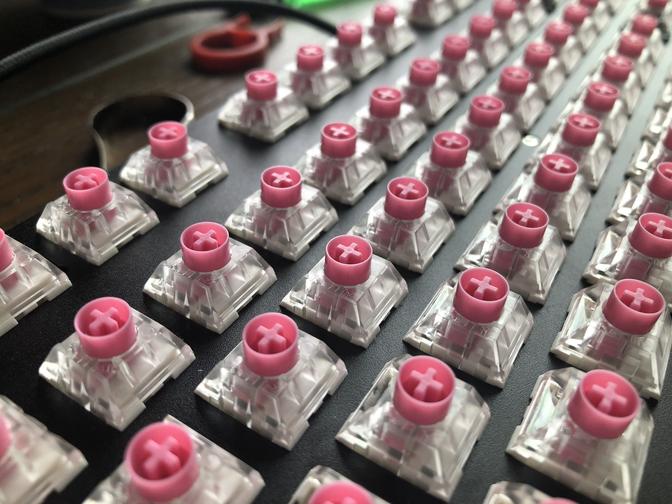 Note that Kailh’s Box switches don’t get their name from their stem shape. Instead, the ‘box’ moniker refers to the shape of the housing’s structure, which is box-like for fighting off dust and moisture. Interestingly, retailer Kono believes Kailh’s box design in general makes them more durable than Cherry MX’s bare crosstem design. The retailer

they last “25% longer than regular MX variants during stress testing” and also are less wobbly. If you’ve ever noticed wobbly keys with any of Cherry’s Red switches, Silent Box Reds are worth considering.

In my roughly two months using a Glorious Modular keyboard with Kailh Silent Box Reds on and off, I spotted a shameful amount of dust and hair around the keycaps. Upon removing the keycaps, I saw that problem carried over to the spaces between the switches too. However, I couldn’t spot any dust in the switches or in the circle stems. And, of course, the keyboard has been functioning properly.

Kailh’s Silent Box Reds are IP52-certified. That promises that dust won’t enter in notable enough amounts to interfere with the product working. According to the

, which makes the certification, this rating also assures you that “vertically dripping water shall have no harmful effect when the enclosure is tilted at an angle up to 15° from its normal position.” That’s quite specific but at least tells you that these are at least somewhat waterproof. That’s more than

offer. The switches’ IP40 certification only promises that objects over 1mm won’t interfere, and doesn’t cover liquids at all.

The Silent Box Reds fight off dirt with their slider design and sealed composite gold alloy contacts. Keep in mind that Kailh says this certification applies best when “applied to products that meet the corresponding protection level.”

Kailh designed the switches to be both easy to press and quiet. According to the vendor, the switches require 35g of force to actuate, and noise is kept to under 30dB. Noise reduction purportedly occurs in each switch’s glass fiber-reinforced base.

In terms of materials, the switches are also working with copper alloy static and movable plates, a POM slide and a POM/TPE stem, a PA66 base and cover, a stainless steel spring and a buffering rubber mat.

With a transparent casing, the switch is also RGB-ready. Kailh recommends pairing the switches with a keyboard using SMD

directly mounted onto the circuit board. They certainly had no problem illuminating my Glorious Modular keyboard. As far as I could see, the RGB was just as bright compared to the keys using Gateron Brown switches.

These Kailhs are equipped to fight fatigue. Since they require a very small amount of force to actuate, your fingers should be able to press each key with less work than when typing on Cherry MX Silent Reds or even regular

With a mere 35g of force (give or take 10 grams) needed to reach their 1.8mm actuation point, Kailh’s pink switches feel much different than Cherry MX Reds, which need 10 more grams of force. And if you’re being detailed, Cherry MX Silent Reds actuate further, at 1.9mm. Like our review subject,

switches also require 35g, but actuate at a further 2.2mm. Long story short: These may very well be the lightest mechanical switches you’ve ever used.

This low actuation force makes for breezy typing, but also easier accidental presses. During long typing sessions, like when writing an article, I had a recurring issue with pressing the same key twice. I also noticed it when sending quick messages to my colleagues over Slack. The switches actuate so effortlessly that it’s easy to register an additional keypress before the switch has come back up to its original position. Ultimately, the switches made heavy typing sessions a little more arduous.

I might’ve suffered from this more because I’m a heavy typist (I’m constantly bottoming out). So if you’re a daintier typer, your experience may be smoother. To be sure, I’d recommend typists pair these switches with quality keycaps that aid in accuracy, including those that provide cozy grooves for your fingertips or PBT keycaps, which will provide more texture / resistance than your typical ABS plastic. A keyboard base with well-distanced keys may also help.

As is the case with any linear switch, there’s no bump to feel as you go down the Silent Box Red’s 3.6mm of travel. That 3.6mm wasn’t far enough from

3.7mm for me to notice an obvious difference in a side-by-side comparison in bottoming out. Thankfully, these switches didn’t make me feel like I was typing in sand, like I did trying out

(3.2mm total travel actuation at 1.2mm with 45g). Instead, it almost felt like I was typing on clouds -- soft, light and easy with no resistance or snappiness.

On the 10fastfingers.com typing test, I averaged 117 words per minute (wpm) and occasionally surpassed 120 wpm with Kailh’s Silent Box Reds. That’s good speed, considering my usual 110 wpm average. However, my average accuracy dropped from my usual 98% to 94.58%.

If anyone’s ever asked you to stop typing on your mechanical keyboard during a conference call or in real life, Silent Box Reds are a solution. According to Kailh, the average noise level is 28.67dB, with sound maxing out at 32.93dB and reaching a minimum of 25.41dB. Kailh got these results by testing the switches with an unspecified keycap and a microphone 5.9 inches (150mm) away and 5.3 inches (135mm) tall.

a keycap or keyboard housing measure 42dB, Cherry told me, so that makes Kailh's rivals are already quieter. On the

Due to their linear travel, Kailh Silent Box Reds already have an advantage for gaming. Without a bump to pass through before actuating or bottoming out, linear switches are good for pressing switches repeatedly and rapidly.

But compared to your more common Cherry MX Reds and similar linear switches, Silent Box Reds are much lighter, meaning it’s ever easier to hit them repeatedly and lightly. In a very informal test, I was able to hit a key with a Kailh Silent Box Red on average 137.5 times in 20 seconds compared to an average of 131 times with Cherry MX Silent Reds.

In various games, I found that long presses, like when holding down W and Shift to sprint in

were easy on my fingers. I didn’t have to press hard for the inputs to register long-term, and bottoming out didn't take much exertion either. The switches were light enough to navigate quick movements in intense battles in

where there was limited time for thinking.

These switches are much more conducive to chatting with teammates than clicky alternatives. Again, Kailh pegs the switch’s average noise level at 28.67dB with a maximum of 32.93dB. In a side-by-side comparison with Cherry MX Silent Reds, both made very soft noises when bottoming out. The Cherry SIlent Reds have a very slightly higher pitch when coming back up, though this wasn’t always noticeable. It was most obvious when bottoming out or pressing the keys hard. With each switch inches away from a different ear, I could hear that Cherry MX Silent Reds have a mechanical sound that the Kailhs lack. But from a typical distance from the keyboard, it was pretty hard to tell them apart by sound.

swapping out switches in a mechanical keyboard

or building a new one, Kailh recommends buying the switches at

We’ve also found these switches for $6 for 10 at

for 90. That makes Kailh Silent Box Reds on the pricier side.

There’s only one keyboard with Kailh Silent Box Red switches out-of-the-box. The

The Kailh Silent Box Red switches bring another quiet option to the clacky world of mechanical keyboards. Their sound profile is soft and silent and rivals Cherry’s MX Red Silent switches. Plus, they’re built for durability and are easy to actuate repeatedly and quickly, which comes in handy for gaming.

However, these are some of the lightest switches outthere. Heavy typists can expect accidental keypresses and the occasional key bounce. For the Silent Box Reds, you’ll want to use comfortable keycaps that help you avoid double presses.

You may differ, but I also find the lack of a tactile bump less enjoyable and somewhat tiring for long typing sessions. If your fingers agree,

tactile switches are another option.

Those who want a quieter keyboard with a soft and light feel will find a perfect match in Kailh’s Silent Box Reds.

Scharon Harding is a Senior Editor at Tom's Hardware. She has a special affinity for gaming peripherals (especially monitors), laptops and virtual reality. Previously, Scharon covered business technology, including hardware, software, cyber security, cloud and other IT happenings, at Channelnomics, with bylines at CRN UK.