LG phones are dead: Here’s why we’re going to miss them

After many months of rumours,

it is quitting the smartphone business.

Whatever your opinions were on LG’s recent crop of phones, there’s no doubting the brand has released some of the wildest and most innovative phones of the last couple of decades.

Not all of these earned a place on our

list and not all the ideas worked too well in practice (yes, we’re looking at you modular phones). But you can’t say LG didn’t at least try. Even in the last few years, LG has dabbled with unusual form-factors, extra screen-toting add-ons and rollables.

So what have been the highlights in LG’s extensive phone back catalogue? Let’s have a look and see.

was LG well, flexing in 2013. This was a phone with a curved pOLED display and it was unlike anything that came before it. Actually, aside from the 2015 sequel, there has been little like it since. Just look at how much of a curve the display had. What was the point? Well, I am still not entirely sure.

The G Flex also had what LG called a ‘self-healing back’. Instead of a normal plastic top layer, the rear of the G Flex had a thin layer of resin covered by a protective film that was supposed to make scratches invisible – or at least less visible – after a short period.

Did it work? Here’s what reviewer Andrew Williams said at the time, “it is pretty effective at reducing the appearance of light scratches caused by coins and keys in your pocket. After a few minutes’ rest after being lightly abused with a few coins, there was no sign of any damage – despite the scratches being initially quite clear.”

Modular attachment for the LG G5

wanted to be far more than another Android flagship. This was LG’s attempt to create a modular smartphone ecosystem, where a variety of accessories could be added directly onto the body of the phone.

You would slide off the bottom and attach one of the modules, or ‘Friends’ as LG referred to them.

The idea was certainly innovative and I remember being won over by the sales pitch. It’s a shame then that in reality, things didn’t work out quite as expected.

First off, there were only two Friends launched with the phone – a camera grip that added a separate shutter button and a jog dial for zoom, alongside a 32-bit B&O branded DAC for improved audio.

In my LG G5 review from 2016 I said, “I find myself wishing that LG had started off with slightly more enticing accessories. The DAC is a nice idea – I’m all for ways to improve smartphone audio – but the camera grip doesn’t actually make the camera any better; it just makes the shooting process ‘easier’.

“I also don’t like the fact it encourages people to use digital zoom – photo tech that universally produces terrible photos on all the smartphones I’ve tested, including the G5.”

After the initial batch, a few more friends arrived in the form of a 360-degree camera and a downright

. We reviewed the 360 VR at the time, saying “Honestly, I’ve had a much better experience using Google Cardboard, which costs less than £20.” Ouch. 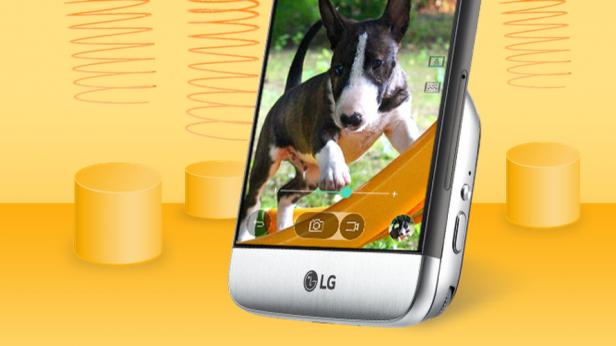 Teaming up with Prada

While most of the phones on this list are smartphones, some of LG’s most iconic work was done when mobile phones were very different.

The LG Prada was a 2007 collaborating with famed Italian luxury designer Prada (you’d probably guessed that from the name) and it made quite the splash.

It was pricey at $777, but it was also the first phone to come with a capacitive touchscreen and hit shelves just before Steve Jobs unveiled the original iPhone.

LG’s last few flagship and pricier mid-range options touted a dual-screen case as one of the key features of differentiation. This was LG’s competition to the growing foldable phone fad and in many ways it bettered them.

Instead of forcing you to pay over the odds for a dual-screen experience, LG included a case with a secondary panel built-in with phones like the

You could clip the case on and double your screen real-estate, using that second panel as a game controller or just an extension of the main display.

Like many of LG’s ideas on this list, the idea is a lot better than the outcome. While the dual-screen accessory was a nice concept, it was never utilised properly by developers updating their apps and felt more like a gimmick in the end.

will go down as LG’s final

and wow, what an odd device to finish on.

This bonkers dual-screen sort-of-foldable phone had a main display that flipped out to sit horizontally. This was then paired with a smaller display below.

I mean, just look at it in use…

The Wing was a decent phone that never came to the UK and it seems now it never will. It was just another example of LG trying something wild that didn’t quite land as expected.

Moving the buttons to the back

One feature that a number of LG phones released between 2013-2015 had in common was odd button placement. Instead of the more traditional side-mounted lock and volume keys, LG had a habit of shifting them to the back of the phone. Like this…

The LG G2 did this and in our 2013 review we said, “ultimately, reaching to the rear of the phone to lock the screen feels far more awkward than simply tapping a top or side-mounted control.”

With the news of LG shuttering its smartphone business, it seems

teased earlier this year will never come to be.

There was only a brief look at the device shown, but it was already clear this was going to be another attempt for LG to try something different.

Do you have a favourite LG phone? Let us know @trustedreviews