"Meme stocks" have returned to Earth — and to a changed market

Investors have cooled on so-called meme stocks, spurred in part by worries about inflation and the Federal Reserve's efforts to control spiraling consumer prices. Yet while the shares of companies like GameStop and AMC Entertainment have slumped since skyrocketing early last year, they haven't nosedived as many establishment experts predicted. That's encouraging some large investors to change their strategy to factor in social media's power to move financial markets.

The decline in meme stocks parallels the recent selloff in other speculative assets, including cryptocurrencies and non-fungible tokens amid broader concerns over inflation.

Referring to WallStreetBets, the Reddit forum that spurred the meme-stock craze, and Robinhood, the free trading app that enticed many young investorsinto the market last year, Hogan said, "We've seen a falloff in engagement there."

"Like all manias, they tend to have a shelf life," he added.

Last year's heady rush into heavily shorted stocks gave embattled companies such as GameStop, Bed Bath & Beyond and dozens of others a new, if tentative, lease on life. Yet while shares of the video game retailer are down 68% from their peak of $325 in late January 2021, even with the recent selloff the memeiest of meme stocks are trading higher today than before the mania started a year ago this month.

In looking at meme stocks, or what JJ Kinahan, TD Ameritrade's chiefmarket strategist, calls the "stay-at-home stocks," investors are trying to determine their pricing in light of expectations about the future,including higher interest rates.

The game vendor has leaned into the investment from shareholders to start transforming its business, analysts said.

"The funny part of this whole thing, GameStop gets to live another day and reinvent itself and use the equity capital it has into what may well be a sustainable business model," Hogan said.

As for AMC, a struggling theater chain, it's still to be determined whether cinema audiences will return after getting accustomed to watching films at home, Kinahan said. The stock is trading at seven times its price at the start of last year. 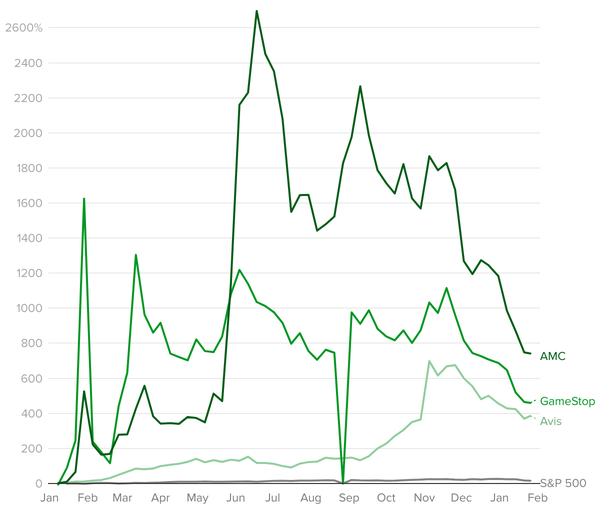 Just as meme stocks led the broader market last year as they ballooned in price, they're now leading the drop. A basket of 37 "meme" stocks tracked by Bloomberg lost nearly half of its value since mid-November — a period over which theS&P 500 fell by a little over 6%.

Another tracker, the MEME exchange-traded fund, is trading down nearly 50% after debuting in early December, compared with a decline of less than 6% for the S&P 500 in that period.

"The market has changed"

But while many of the meme stocks that flew high last year have fallen, their mere existence signifies an important shift in the market, according to Wall Street watchers. Just as there are now specific indexes designed to follow stocks that make noise on social media, institutional investors are taking such buzz into account in making investment decisions for their clients running pension funds and 401(k) assets for millions of people.

Investors a decade ago mostly zeroed in on a company's financial performance, such as past and projected profits, in assessing its stock. But recent years have underscored the importance of momentum in stock prices, Dusaniwsky said. In his definition, a stock has "momentum" when its price has changed significantly in the previous week at the same time it is attracting attention on social media and Wall Street.

"It doesn't have anything to do with technical aspects [of the company] or anything — it's really the market moving the stock," he said.

The astonishing run-up in meme stocks over the last year has also led large investors to exercise more caution in short-selling stocks now that it's possible for a single out-of-favor stock to skyrocket in a matter of days.

The populist hunt for massively shorted stocks to push higher may be over, but the phenomenon had another effect.

"The industry struggled for years and years as to how to get young people into the market — I don't think anyone expected them to all come at once," Kinahan quipped.