feature update, known as "version 21H2" will ship later this year and include a handful of new changes and enhancements, most of which are aimed at enterprise and business customers. Just like version 21H1 and 20H2 before it, version 21H2 will be delivered via a cumulative update which is much smaller and quicker to install.

Version 21H2 for Windows 10 is now available for testing in the Windows Insider Release Preview channel. 21H2 will include the following new features:

Microsoft says that the features noted above will show up over the summer for Insiders testing Windows 10 version 21H2. This release is for customers who won't or can't update to

when it ships this fall. Windows 11's first release is also confusingly branded "version 21H2," even though the OS and platform release is completely different.

Windows 10 version 21H2 will be supported for 18 months for Windows 10 Home and Pro users, and 30 months for Enterprise and Education customers. It's currently not clear if Microsoft plans to ship more feature updates for Windows 10 once Windows 11 ships, so we'll have to wait and see.

We fixed an issue with searchindexer. After you sign out, searchindexer continues to hold handles to the per user search database in the profile path, "C:\Users\username\AppData\Roaming\Microsoft\Search\Data\Applications\". As a result, searchindexer stops working and duplicate profile names are created.

We fixed an issue that prevents gaming services from opening certain games for desktop users.

We fixed an issue that prevents you from entering text using the Input Method Editor (IME). This might occur, for example, after startup if you have set the power options to shut down a laptop by closing its lid.

We changed the functionality for uploading new activity into Timeline. If you sync your activity history across your devices using your Microsoft account (MSA), you cannot upload new activity into the Timeline. You can still use Timeline and see your activity history (information about recent apps, websites, and files) on your local device. This does not affect Azure Active Directory (AAD) accounts. To view web history, Microsoft Edge and other browsers provide the option to view recent web activities. You can also view recently used files using Microsoft OneDrive and Microsoft Office.

We fixed an issue that might cause the File Explorer window to lose focus when you are mapping a network drive.

We fixed an issue that causes File Explorer to stop working after reaching 99% completion when you are deleting many files on a mapped network drive.

We fixed a timing issue in the Group Policy Registry Telemetry that causes Group Policy extension processing to fail.

We fixed an issue that repeatedly rebuilds the Windows Filtering Platform (WFP) filters. This issue occurs when a device is enrolled in a mobile device management (MDM) service and "MDMWinsOverGP" is set.

We fixed an issue with an MDM service that fails to correctly apply certain junk mail rules.

We fixed an issue that always reports the update build revision (UBR) as zero (0) on a device during enrollment to an MDM service.

We fixed an issue that causes the enrollment of the Elliptic Curve Digital Signature Algorithm (ECDSA) certificate to fail with the error, "0x80090027 NTE_INVALID_PARAMETER". This issue occurs when the Trusted Platform Module (TPM) provider (the Microsoft Software Key Storage Provider) stores the key.

We fixed an issue wi

th auditing events 4624 and 5142 that display the wrong event template when Dutch is the display language. 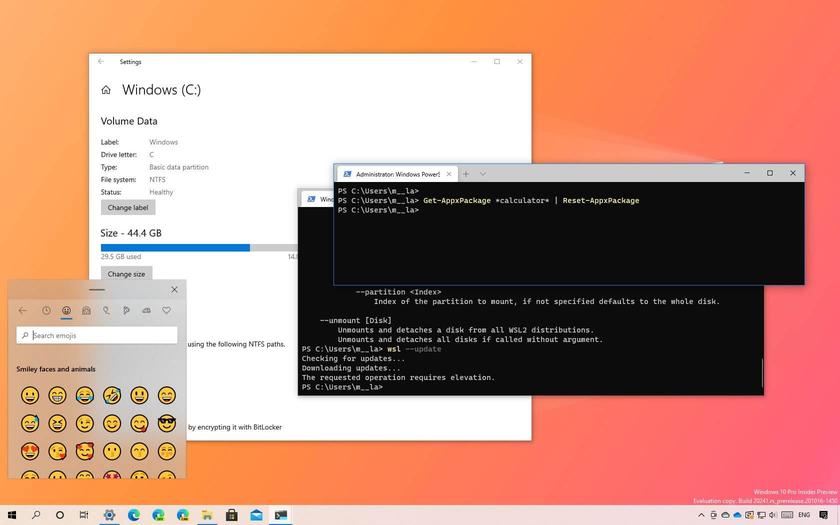 We fixed an issue that causes System Integrity to leak memory.

We fixed an issue that plays the sound for selecting something in a game loudly when you press the trigger button on a game controller.

We fixed an issue that prevents power plans and Game Mode from working as expected. This results in lower frame rates and reduced performance while gaming.

We fixed an issue in which "Network Internal Access" appears on the taskbar network icon on systems that access the internet from certain domains.

We fixed an issue in which the Network Connectivity Status Indicator (NCSI) fails to detect internet connectivity after you connect to a virtual private network (VPN).

We fixed an issue that causes printing to stop or prints the wrong output. This issue occurs when you print using a USB connection after updating to Windows 10, version 2004 or later.

We fixed a rare issue that might degrade performance in applications that call Gdiplus.dll!GdipMeasureString in a tight loop with a new font on each call. This issue occurs after installing Windows updates released on and after February 2021.

We fixed an issue that always displays devices that RemoteFX USB redirects as "Remote Desktop Generic USB Device" instead of the actual device name.

We fixed an issue in which Set-RDSessionCollectionConfiguration does not set the camerastoredirect:s:value custom property.

We fixed an issue that prevents you from accessing a network drive that maps to a Distributed File System (DFS) root after you sign out.

We fixed an issue that prevents you from reconnecting to mapped network drives after you sign in and displays an access denied error. This issue occurs if you use the net use /deep option to create multiple drive mappings to different paths on the same encrypted file share.

We fixed an issue that prevents the Windows Server service from starting if SrvComment is greater than 128 characters.

We fixed an issue with an unhandled Open File dialog critical exception. As a result, Microsoft Foundation Class (MFC) applications might close unexpectedly.

We fixed an issue in which the Storage Sense page in Settings might incorrectly report the size of some storage devices that use the GUID Partition Table (GPT). The affected devices will incorrectly report in Storage Sense that the size is twice as large as the size reported in File Explorer. Note: This issue does not affect storage devices that use a master boot record (MBR).

Forza Horizon 5 is official, and it's one of the most visually impressive games we've ever seen. We've done our research and gathered every scrap of information we could find. Here's everything you need to know about Forza Horizon 5, launching on Xbox and PC on Nov. 9, 2021.

The latest stream for Forza Horizon 5 has just concluded, and it showed excited fans a ton of new gameplay in the newly revealed 2020 Toyota Supra GR, and even showed off the full map in its entirety.

So so so light

Review: XPG's Xenia 14 is the best laptop so far from the new PC brand

It's lighter than LG's gram and it has a very competitive price. The Xenia 14 is an all-around impressive 14-inch Ultrabook that shows XPG isn't going away.

Prepare for your next trip with the best travel routers

If you're going on a trip, you need a portable travel router that not only provides a fast connection, but offers a few more uses as well. Here's the travel routers that will make dealing with Wi-Fi on your tip a breeze.