Stocks diverged Monday as a pre-weekend rally on Wall Street fizzled with traders looking ahead to a charged week of central bank policy meetings and US jobs data.

Meanwhile, oil prices pushed higher ahead of a meeting of OPEC and its allies on whether to continue its policy of gradual increases in production."There's no shortage of risk events for the markets this week with rate decisions from the Bank of England and the ECB (European Central Bank), the US jobs report and a slew of earnings," noted Victoria Scholar, head of investment at Interactive Investor.

Wall Street opened mixed after a strong rally at the end of last week, with both the Dow and S&P 500 falling.

Most Asian stock markets closed higher Monday, though traders remained nervous about the Federal Reserve's plan to hike US interest rates as it battles surging inflation.

The JSE's All Share Index gained more than 1%, with MTN up more than 10% following strong results from its Nigerian business. The tech-heavy Nasdaq led the strong finish Friday for US equities Friday thanks to soaring fourth-quarter profits at Apple, which lifted optimism about consumer spending and the economic recovery. 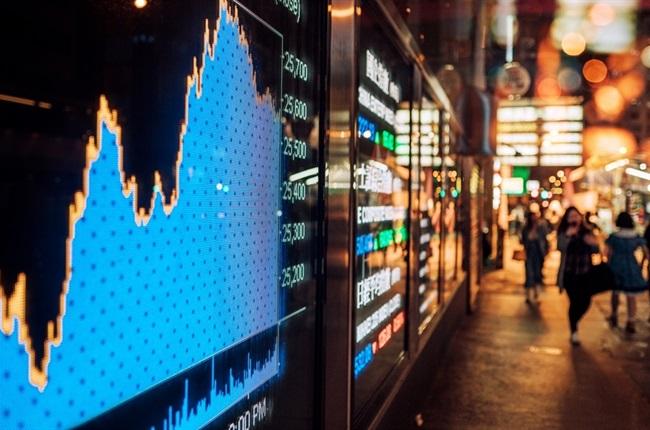 The strong performance, coupled with strong US economic data, filtered through to Asia, where trade was thinned by investors winding down ahead of the three-day Lunar New Year break that starts Tuesday.

The gains followed a period of upheaval across world markets as the Fed readies to withdraw the vast financial support put in place at the start of the pandemic, which has fuelled a near two-year equity rally."

The markets have been roiled by concerns about stubborn inflation pressures and expectations that the Fed will have to be aggressive with its monetary policy tightening campaign," said analysts at Charles Schwab brokerage.

Observers debate the Fed's likely moves as US inflation sits at a four-decade high, with some saying it could hike up to seven times before 2023, with an initial 50 basis point move in March.

The Bank of England is widely expected to increase its main interest rate by a quarter-point Thursday to 0.5 percent.That follows its decision in December to increase borrowing costs from a record-low 0.1 percent to 0.25 percent to combat decades-high inflation.

This week sees also an ECB policy update.ECB chief Christine Lagarde has downplayed inflation concerns, arguing that the forces pushing up prices across the eurozone are expected to ease over 2022.

Official data Monday showed the eurozone economy grew 5.2 percent last year after a pandemic-induced recession. Meanwhile, although German inflation slowed in January, it still came in higher than expected and will likely put more pressure on the ECB to react.

Oil prices were higher as OPEC and its allies prepare to meet Wednesday to discuss a further increase in output.

The price of West Texas Intermediate (WTI) crude hit its highest level in more than seven years earlier this month, fuelled by easing concerns about the Omicron Covid variant and geopolitical tensions.

Analysts have said that if Russia sends troops into Ukraine, crude prices could top $100 for the first time since 2014.