Two medical students at the Carle Illinois College of Medicine recently designed a bionic knee brace that could provide more mobility for people with cerebral palsy than current knee braces.

The bionic knee brace uses bio-feedback sensors and a power generator to detect when the leg muscles are trying to be moved willingly. When muscle contraction is detected, the power generator is activated to help move the muscles, which was the goal of the design.

“This is the first of its kind, using muscle contractions to help assist movement,” Amin said. “There are other orthotic braces, but they don’t have embedded electronics and machine learning.”

Amin and Mann designed their knee brace as part of their capstone course. Professor Michael Oelze, director of Capstone Projects at Carle, explained that every fourth-year medical student goes through this process. She further explained that the Capstone course gives students the opportunity to develop a solution to an identified problem. Medical students are then provided the resources and expertise needed to realize their designs. 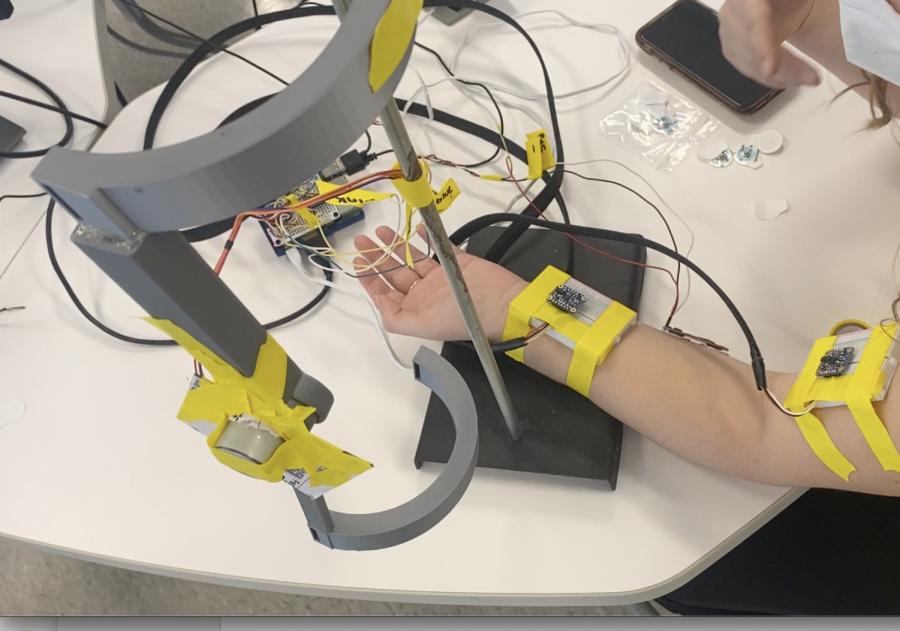 “The medical students act as the leaders of these teams of engineers,” Oelze said. “What we’re hoping to do with our medical students, when they finally graduate from medical school, we want them to be physician innovators.”

Mann explained that he had been interested in creating this design since before he began working on it at Carle.

“The idea behind this is something that I’ve had in my head since long before this,” he said. “It’s something that’s been a little passion project of mine for years.”

Mann also explained that his interest in creating the design came from his personal goals. He expressed his passion for working with people, especially children with disabilities.

“What I want to do more than anything else is to help give them the tools they need so that they’re able to do the things that they want to do,” he said.

While the design aims to help cerebral palsy patients, Amin’s interest in the design comes from its potential uses in helping people who have survived car accidents.

“Technology like this can also help people that lose spinal cord function after a bad car accident,” he said. “It could help somebody like that as well.”

The design may not be finalized, however, Amin and Mann are hopeful about the future.

“We’ve managed to get it to a state where we have a proof-of-concept prototype that works and shows that the idea is solid, that the idea has potential and it is something that could work,” Mann said.

“This spring, before graduation, we’re hoping to have an even better prototype than what we have now,” Amin said.

Editor’s Note: A previous version of this story included the phrase “cerebral palsy sufferers.” The story has been updated with the appropriate phrasing “people with cerebral palsy.” The Daily Illini regrets this error.