Location： Home / Technology / The What and Why of Programmable Proxies

The What and Why of Programmable Proxies

A question which gets often asked is "What is a programmable proxy, and why do I need one?" This article tries to answer this question from different perspectives. We will start with a brief definition of what a proxy is, thendiscuss how proxies evolved through different stages, explaining what needs they responded to and what benefits they offered at each stage. Finally, we will discuss several aspects of programmability and provide a summary of why we need a programmable proxy.

What is a Proxy?

A proxy server is usually deployed in the middle of two isolated networks and is responsible for data transfers from one side to the other so they appear as a single network. In its simplest form, a proxy is a gateway between a user and the internet, as ithas existed since the birth of computer networks. A proxy not only acts as a network connector, though, since it also enables additional functionality and use cases like:

Proxies working at layers 4 and 7 of the ISO/OSI model are sometimes referred to as "routing mode" proxies. Mostproxy services are available as open source software and account forthe majority of network infrastructure software, providing specialized functions in different domains, such as proxies for specific protocols, proxies for load balancing, proxies for cache acceleration, and so on.

Learn Istio Fundamentals The easy way to learn Istio. Istio is an open-source service mesh platform that helps microservices communicate with each other. Learn More.

Proxy servers have evolved through different stages of development:

This generation of proxy is entirely configuration based. The user sets a number of parameters, configures rules in a configuration file, and then starts the service process to execute those rules.

Using shell scripts, for example, one can write simple logic, but when shell code reaches a certain level of complexity, it is often required to step up to more structured scripting languages like Perl or Python.

Such languages bring the convenience of scripting and the structural advantage of a full-fledged programming language. Examples of this are OpenResty (Nginx + Lua) and Nginx Plus (Nginx + NJS). This category also includes proxy servers implemented in a number of application programming languages, such as Node-based StrongLoop Microgateway and Java based Spring Cloud Gateway, which often have scripting capabilities of their own.

Scripting languages solve the complexity inherent in modularizing and structuring complex logic. A further requirement at this point is to integrate proxies with other administrative control tools, hence the need for a REST or similar interface. Indeed, an external control plane can use that interface to dynamically update the logic in the script.

At the same time, the use of proxies has moved from single instances to clusters of proxies. In fact, proxy software like Envoy and OpenResty-based Kong often support clustering capabilities themselves, implementing them in some centralized or shared (via RDBMS etc) way, while also providing REST administrative interfaces to manage the configurations.

In the Cloud era, proxies are deployed in a distributed manner. The most common scenario is to deploy one proxy for each application process, following the Sidecar Proxy pattern.

In the Cloud era,proxy processes for each upstream service are independent and isolated from each other. The adoption of distributed proxies opened the door to using different rules and policies for different upstream services, that is to multi-tenant capabilities.

The various upstream services not only have logically independent rules and policies. Physical isolation is also provided, allowing granular management at the process and interface level. This isolation is a strong requirement in a multi-tenant environment – different upstream services belong to different tenants, and tenants should not affect each other or know each other’s configurations.

Service meshes are representative of this era. Service meshes are composed of two key architectural components, a data plane and a control plane. Contrary to what the name suggests, a service mesh is not a “mesh of services.” It is a mesh of proxies that services can plug into to completely abstract the network away. Typical examples are istio+envoy, Linkerd + Linkerd proxy.

Created by one of the authors of this article, Pipy is a product of this era and falls under this category. Pipy is an open-source, lightweight, high-performance, modular, programmable network proxy for cloud, edge, and IoT. Pipy is ideal for a variety of use-cases ranging from (but not limited to) edge routers, load balancers & proxy solutions, API gateways, static HTTP servers, service mesh sidecars, and other applications. Pipy is in active development and maintained by full-time committers and contributors, though still an early version, it has been battle-tested and in production use by several commercial clients.

From the discussion above, it is clear that each stage is an improvement over the previous one.

Proxy Software Requirements and their Evolution

Let’s take another look at the evolution of proxies considering how their requirements evolved.

The first generation of proxies mainly implemented a functionality of gateway between users and the services and provided basic configurable capabilities.The real-time transmission of massive data requires high throughput, low latency and low resource usage. Like all software, proxies are also required to support modularity and extensibility.

Proxy software in this stage was mainly developed in C, as was the case with extension modules that get loaded dynamically at the start of the process.

To summarize, proxy requirements at this stage are connectivity (network capabilities), ease of use (configurable via configuration files), reliability (requirements for cross-linking devices), high performance, and scalability.

The second generation of proxies got further improvements in extensibility and flexibility, such as some dynamic data acquisition and the ability to perform some logical decisions on acquired data. The introduction of DSL-based scripts further enhanced usability. Support for combinatorial logic and dynamic data retrieval provided flexibility while improving scalability.

Developers’ productivity and the complexity of maintaining massive scripts require this generation of proxies to use a structured scripting language, while keeping the performance, low resource utilization, and other core capabilities of the previous generation.

Scripting capabilities are widely used, mainly because it is difficult to develop and maintain extensions using C. Indeed, scripting languages are easier to learn and provide faster turnarounds when compared to compiled languages.

The fourth generation of proxies starts with cluster support, which improves manageability.

Thanks to REST interfaces, proxies become part of the network infrastructure implementation, and a starting point for infrastructure as code. REST interfaces besides improving proxies manageability also contribute to simplify their administration. External interfaces are also an important feature of programmable proxies, and REST, as the most common form of interface.

At this point, programmability consists of three layers: programmable core modules, programmable dynamic logic, and programmable external interfaces. The emergence of proxy server clusters reflects the change of perspective in scalability from functionality extension to resource expansion (where users can modularize functionality into multiple instances, instead of writing a monolith script).The emergence of REST interfaces provides the technical foundation for self-service and managed services that provide, e.g. a control panel for configuration and control.

The evolution of the fifth generation of proxies is driven by the popularity and rapid development of cloud computing, bringing the requirements of elasticity, self-service, multitenancy, isolation, and metering.

With the expansion of cloud computing to the edge, the fifth generation of proxies need to support heterogeneous hardware, heterogeneous software, and low-energy consumption tooptimize the integration of the cloud and the edge.

The fifth generation of proxies also shows advances in programmability: from the core module, dynamic logic, and external interface we saw earlier to cloud-ability, support for distribution, multitenancy, and metering. Metering is a derivative requirement of multi-tenancy, which requires isolation on the one hand, and that resources can be measured at the smallest possible granularity on the other.

Let’s summarize the above discussion into a tabular format, where rows correspond tospecific requirements and columns toproxies at different stages. For each evolution stage,we also provide typical examples or known software in parentheses. In each cell, we use * to indicate whether such capabilities are available and to what extent (1-5 , 5for full support, and 1 * for basic support).

In this article we tried to provide our answer to what a programmable proxy is. To this aim, we started from the definition of what a proxy is and what its key characteristics are. Then we expanded our discussion to include the evolution proxy that has gone through, explaining the features and functionalities that were added at each stage. Finally, we summarize our discussion of proxy features by splitting them into 17 different categories and ranking each generation of proxy. This classification allowed us to identify thekey characteristics and attributes that are required for a proxy to be labeled as programmable. 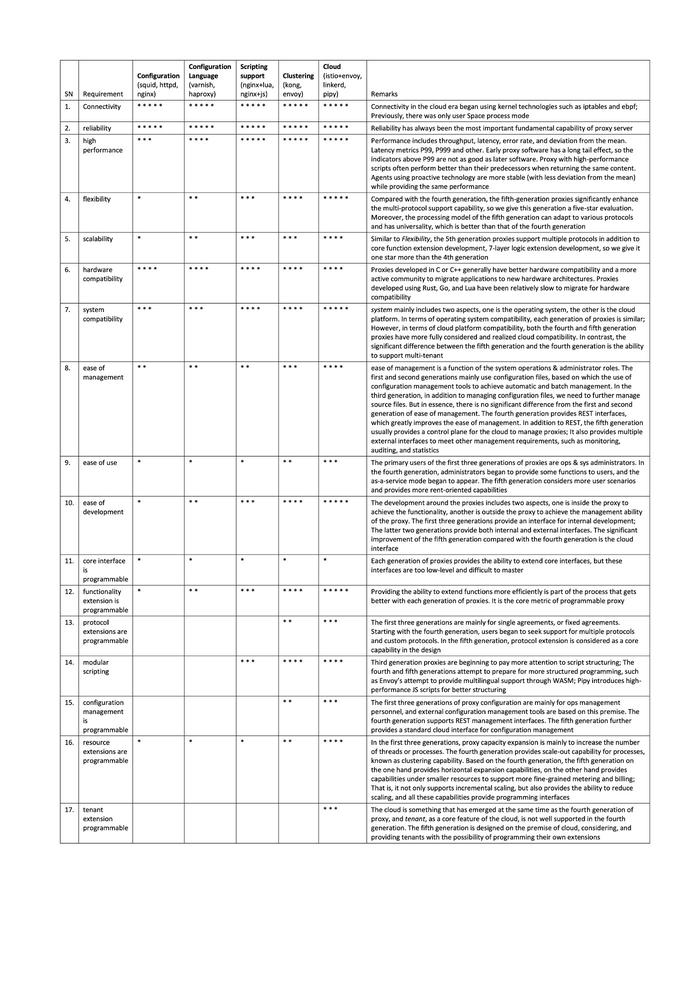