ANKARA: A bipartisan group of US Congress lawmakers have called for the suspension of American drone technology transfer to Turkey over concerns about Ankara’s unmanned aerial vehicle (UAV) weaponization program.

In a letter to American Secretary of State Antony Blinken, 27 lawmakers appealed for a temporary hold on Turkish exchanges, including export permits, pending a US State Department review.

The letter, dated Aug. 9, said: “We are writing to express our concern over Turkey’s armed UAV program, which has destabilized multiple regions of the globe and threatens US interests, allies, and partners.”

The use of Turkish drones in the Nagorno-Karabakh enclave during last year’s conflict between Azerbaijan and Armenia, as well as in Syrian and Libyan civil wars, formed the main focus of the group’s concerns.

The lawmakers pointed out the existence in Turkey’s Bayraktar armed drones of parts and technology from American firms and US-based affiliates of foreign companies.

They asked Blinken to open an investigation into the Turkish drone industry and to reveal if its UAVs included US technologies that breached American sanctions against Turkey’s Presidency of Defense Industries.

In April, Canada canceled export permits for drone technology to Turkey over its use of UAVs in the conflict between Azerbaijan and Armenia, actions it said were inconsistent with Canadian foreign policy and end-use assurances given by Ankara. The embargoed parts included camera systems for armed drones.

Bayraktar drones used by Azerbaijan reportedly contain at least 10 parts manufactured in the US. 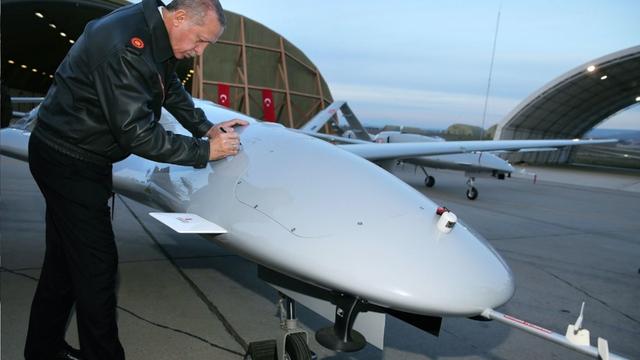 Samuel Ramani, a tutor of politics and international relations at the University of Oxford, told Arab News: “The ban on Turkish drones is related to Turkey’s own military actions rather than Countering America’s Adversaries Through Sanctions Act, which deals with military purchases from Russia and the S-400 (missile system).”

Ramani noted that the letter represented more of a symbolic frustration with Turkey rather than a concerted effort to force a policy change and was unlikely to lead to sanctions on Ankara over its drone use.

He said: “The (US President Joe) Biden administration views Turkey’s influence as a check on Russia in Syria. And Libya and Nagorno-Karabakh are simply not major issues for the administration at this time.

“It won’t risk US-Turkey relations over these issues, especially as it’s more concerned by Russian conduct in Libya and the South Caucasus than anything Turkey has done or is doing.”

Ramani pointed out that US partners, such as Morocco, were likely to be upgrading their militaries with both US and Turkish drones, and Ukraine also had Turkish drone technology.

“I think taking decisive action or deterring countries from using Turkish drones through sanctions would be counter-productive for US interests,” he added.

He said the main questions to be asked were if the drones were being used offensively instead of combatting an imminent threat, and whether they were inflicting avoidable harm on civilians. “If the answer to both those questions is yes, Turkey needs to rein in its drone use.”

The letter added: “Turkish actions have continued to run contrary to its responsibilities as a NATO member state, despite its ejection from the F-35 joint strike fighter program and the imposition of sanctions. These actions include the proliferation of drones.”xe program during a Senate Committee on Foreign Relations hearing.xxx1xxxx

Turkish authorities have not yet issued any official statement about the controversial letter.

Prof. Michael Tanchum, senior fellow at the Austrian Institute for European and Security Policy and a non-resident fellow at the Middle East Institute in Washington, told Arab News that the first seven months of the Biden administration had witnessed no major public flare-ups between the US and Turkey.

He said: “(Turkish) President Recep Tayyip Erdogan has attempted to strike a new tone in his relations with the Biden administration while offering no substantial compromises on the major security policy issues that divide Ankara and Washington.

“Keeping its relations with Ankara cordial and cool, the Biden administration has reciprocated Erdogan’s rhetorical gestures by not applying increased overt pressure on Turkey.”

Tanchum noted that pressure from the US Congress demanding the suspension of permits for the export of US drone technology to Turkey, if enacted upon, would end the current relationship status.

“Turkey’s adoption of the Russian-made S-400 missile defense system remains one of the principal roadblocks to improved relations from the White House’s point of view. In a Beltway game of good cop, bad cop, the Biden administration might use the permit issue to apply more pressure,” he added.

However, Tanchum pointed out that any US efforts to undermine Turkey’s drone production would not go down well with the Turkish public and could help to bolster Erdogan’s declining popularity.