Rainfall in some parts of Australia is “likely to exceed triple digits” this weekend as the monsoon bears down on the continent and thunderstorms roll into New South Wales.

But Victoria, which saw huge storms, hail and flash flooding on Friday, now has a few days of peace and manageable temperatures. Just in time for the Australian Open finals.

While in Western Australia, the mercury just keeps on rising with Perth – yet again – in the midst of a heatwave.

“A monsoon trough will deliver some of the heaviest falls of the wet season stretching from Far North Queensland through to central parts of the Northern Territory,” said Sky News Weather meteorologist Alison Osborne.

“The heaviest halls will be likely north of Townsville during the weekend with day upon day rainfall amounts likely to exceed the triple digits.

“This may lead to river as well as flash flooding and residents should stay up to date and informed.”

Innisfail is looking at 30-70mm on Saturday with a further 10mm on Sunday and temperatures hitting 30C. Cairns could also see heavy downpours.

Even Mt Isa, deep into the outback, could find itself with showers and storms this weekend.

Much calmer in Brisbane, however, where it should breach the 30C barrier throughout a sunny weekend. There is a possibility of showers on Saturday and Sunday but they’ll mostly be light. 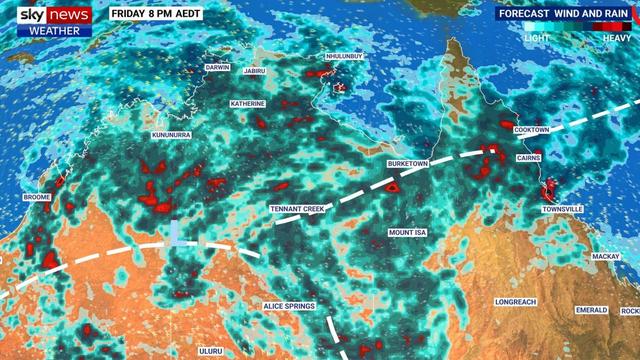 Heatwave back in WA

It’s looking hot, wet and muggy in Darwin with highs of 32C and lows of 26C this weekend. Storms most days with daily totals of 15-30mm in the gauge.

Things are hotting up once more in a dry and sunny Perth. The city and the coast as far north as Exmouth is now in a low intensity heatwave.

Don’t be surprised if it peaks at 40C this weekend in the CBD. However, the current top is forecast to be 39C for Saturday and 38C for Sunday and Monday.

It looks like next week will be another where the mercury rises above 30C every day in the WA capital.

A high of 29C on Saturday in Adelaide, 32C on Sunday and then 33C by Monday. But it should drop to the mid-twenties during next week. Lows of 17-19C are forecast for this weekend.

After it’s buffeting by multiple storms on Friday, Melbourne is in for some much needed settled weather.

“A cool southerly change should bring more stable conditions across places like Melbourne and much of South Australia and Tasmania,” Ms Osborne said.

Saturday will see a much more manageable 25C in Melbourne with rainfall of 1-5mm.

On Sunday, a high of 29C on Sunday creeping up to 32C for Monday.

Hobart may only get to an almost chilly 20C on a grey Saturday and then 23C on Sunday with minimums in the mid-teens.

Moving into NSW and some of those storms will creep across the border into inland areas of the state.

Wagga Wagga could see thunderstorms all weekend with heavy downpours. Potentially 10-25mm could come down on Saturday and up to 20mm on Sunday.

Canberra could also see storms on Saturday with 10-30mm to kick off the weekend. There will be highs of around 27C heading down to 18C overnight for the capital.

Sydney should be largely untroubled by the rain and storms with a weekend of temperatures nudging 30C and dropping to 21C at dawn. There may be a spot of rain on Sunday.

A McDonald’s has become one of the latest victims of Australia’s disastrous weather, with major flooding seeing some serious repercussions.

A tropical heatwave is under way in Queensland’s southeast as the state’s temperatures continue to rise to uncomfortable levels.

A large chunk of Australia looks set to be effectively cut off for days, even weeks, as the deluge continues. And some of that rain is heading towards major cities.