Why Apple’s M1 iMac is an excellent enterprise desktop

Apple’s M1-powered 24-in. iMac takes up less space than a standard display, provides the kind of performance you once needed to spend upwards of $2,499 to get (at a fraction of the price), and looks great. Is this the

I spent a few weeks using one of

shortly after they were introduced, but circumstances beyond my control cut into my plans for a full review. There have already been many reviews, including these:

“A cutting-edge desktop computer that looks fantastic in any setting.”

“Today’s iMac can still play the role of a centralized family computer as my first iMac’s did, but it’s equally good at professional work or sitting on a counter at a retail location.”

“There’s no doubt this is the best 24in all-in-one computer available and one of the very best Macs you can buy. But it is not perfect.”

All the reviewers agree that what Apple has achieved with the M1 iMac is a product more advanced than the one it replaces, with a tweaked design that marries traditional expectations with an updated aesthetic.

The design manages to combine the old and the new in ways that should satisfy expectations built on both. And it’s just 11.5mm thick, albeit at the cost of an external power brick that’s about the size of an Apple TV.

Design matters. You, me, and your employees all feel the difference between using devices built to high design standards and those that are not. That visceral feeling makes a huge difference to the employee experience when working on a computer is what you spend your time doing every day.

, which makes sense when macOS means both hardware design and software work well together. That can improve employee engagement and

may even help retention

This also applies to remote employees who may opt for a desktop system rather than a notebook for their particularly workflow.

I’ve been using an M1 Mac mini as my primary computer since they arrived. It handles everything I throw at it, from basic Office-related tasks to more processor-intensive operations such as video or audio encoding/export. Photoshop has never run faster on a Mac, as

and real-world experience confirm this to be a significant upgrade from both the previous iMac and the far more expensive iMac Pro.

And that’s the point, really, in that the level of performance you’re getting from these systems matches that of systems that cost twice as much.

We know Apple has achieved something remarkable with its Mac processors; this bodes very well for the M1X we expect to see in MacBook Pro systems later this year.

The new iMac costs $1,299 for the 7-core GPU or $1,499 for the model equipped with an 8-core GPU. It is worth noting that most reviews of the product relate to the mid-range or top configurations. While the 7-core GPU is capable of most tasks, if you make your living in video or data analysis, you’ll want the next tier.

that talked about total cost of ownership (TCO) of Macs. This noted that when it comes to tech support (or the lack of need for it), ease of use, and employee satisfaction, these Macs deliver significant advantages over Windows systems. That’s true of these iMacs.

What about enterprises looking to invest in department or company-wide desktop upgrades? Energy consumption is important in any home, but when your business runs a fleet of computers, it becomes a business-critical consideration. 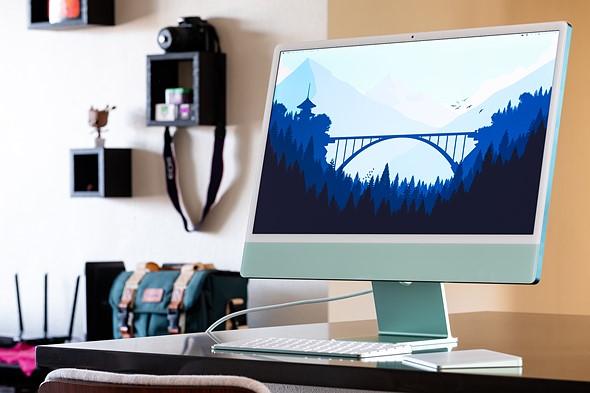 tells us the M1 Macs (which include

the display) run in idle mode at 43 watts and max out at 84Watts (on 8-core GPU configuration). It's 80 Watts otherwise. That means at peak use, you’ll need

half as much energy

as on the 4K 21.5-in. Intel iMac Apple introduced last year, and you’ll probably use less energy than you would with any similarly specified Windows desktop.

In other words, one way to deliver a reduction to your energy bill is to replace existing systems with iMacs — and the more systems you replace, the larger the savings. I guesstimate the energy saving to be in the region of $140/system/year, but only if running them at peak use, which no one does. It will, however, still be significant.

On the future of work, Apple is in retrograde

Given that many enterprises are standardizing around the use of iPads and iPhones, the fact that these iMacs will run iOS apps happily may be an advantage for some business users.

What might not be so good is that Apple has abandoned support for Boot Camp. That means enterprise users must either invest in a

to access Microsoft’s OS in the cloud, or wait and hope Redmond will ship a version of Windows 11 that works on Mac via Parallels.

If I’m honest, I don’t think Windows support on Macs is any longer the game changer it might once have been, as many enterprises have already upgraded legacy Windows-based systems to support iOS and many more have migrated to the cloud.

One more thing: Apple ships these Macs with a color-matched keyboard, mouse and/or trackpad. Which means you can use touch where touch makes sense and more traditional mouse/keyboard UI when appropriate.

Some arguments against enterprise iMacs

There are a couple of criticisms that could inhibit some business users:

You can’t adjust the height of the display.

There is no SD card slot, which may be a problem for companies who use these slots to secure devices and systems. TouchID may go some way to enabling biometric security, however, particularly when using managed systems.

Memory is not user upgradable.

To be fair, the latter is a moot point, given the efficiency of both macOS and Apple Silicon. Very few users will notice an issue with RAM. A 16GB configuration is available, which should be all you need for demanding tasks, at least based on my experience using M1 Macs.

If you need to invest in desktops in your enterprise, these iMacs will handle any task you care to throw at them. They look good, both remote and in-house employees will enjoy using them, you’ll save money on tech support and energy consumption, and when they reach EOL you’ll make some money back on the resale market — or make workers happy by letting them keep these Macs.

There are some caveats:

trend to mobile computing will continue

. It’s possible both remote and in-house employees will need a mobile solution, such as the extremely popular M1 MacBook Air.

At time of writing, Apple is expected to introduce an M1X powered MacBook Pro. These will raise the performance bar in contrast to the current models.

When it comes to processor performance in Macs, Apple is now engaged in competition

Given we expect an M2 chip to appear in a future Mac Pro model in 2022, the company now seems to be on a one- to two-year chip upgrade path, which may cause some enterprise purchasers to sit out the M1 series pending even better Macs the line.

Are iMacs suitable for enterprise use?

Of course they are

. That’s why we’re seeing deployments of M1 Macs across every industry, including company-wide replacement of Windows machines. This is also why we’re experiencing