Probably the most ambitious agreement on renewable energy ever was signed today on the harbor of the city Esbjerg in Denmark. It’s called The Esbjerg Declaration — with the subtitle on The North Sea as a Green Power Plant of Europe.

According to Statista.com, approximately 837 gigawatts (GW) of wind power capacity was installed worldwide from 2001 to 2021. The section on wind power in The Esbjerg Declaration states targets for offshore wind up to at least 150 GW by 2050. The current wind power capacity in Denmark is about 5 GW, half onshore and half offshore.

10,000 of the largest wind turbines available today is needed for this scale of capacity, which can supply energy to about 200 million European households. Still, to reach carbon neutrality by 2050, another 8 to 10 times more capacity is needed. This will be accomplished by even more wind off- and on-shore as well as aggressive expansion of solar power on land and rooftops.

Here is the declaration text in full:

Energy security and the fight against climate change are crucial to the future of the European Union. Recalling the Versailles conclusions on energy, the European Commission’s communication on Joint European Action for more affordable, secure and sustainable energy, and the most recent IPCC report and taking note of the European Commission’s REPowerEU announcement of 18 May, we aim to take urgent and immediate action. The recent geopolitical events will accelerate our efforts to reduce fossil fuel consumption and promote the deployment of renewable energy for more energy resilience in Europe.

Therefore, we will increasingly replace fossil fuels, including Russian oil, coal and gas, with European renewable energy from the North Sea, including offshore wind and green hydrogen, contributing to both EU climate neutrality and energy security. 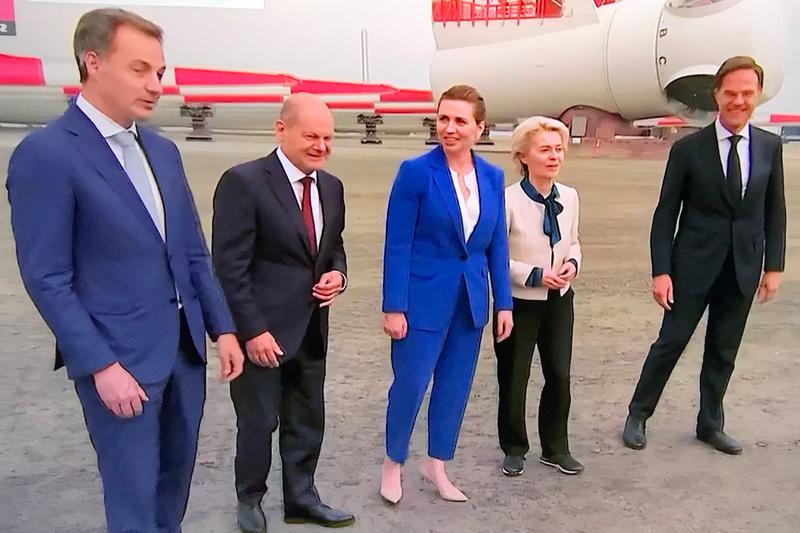 To achieve this and to pave the way for the further expansion of offshore wind, we have decided to jointly develop The North Sea as a Green Power Plant of Europe, an offshore renewable energy system connecting Belgium, Denmark, Germany and the Netherlands and possibly other North Sea partners, including the members of the North Seas Energy Cooperation (NSEC). As Members of NSEC, we will build on the work already accomplished and will implement strategies to achieve our goals in close cooperation with the other regional countries and the European Commission. In doing so, we will strive for a balanced coexistence of economic and ecological needs.

The North Sea as a Green Power Plant of Europe will consist of multiple connected offshore energy projects and hubs, offshore wind production at massive scale as well as electricity and green hydrogen interconnectors. We aim for a cost-efficient buildout of offshore wind that will harvest the potential of the North Sea in the most beneficial way for both the connected countries and the European Union overall.

Together, we have set ambitious combined targets for offshore wind of at least 65 GW by 2030. Based on the North Sea as a Green Power Plant of Europe, together we aim to more than double our total capacity of offshore wind to at least 150 GW by 2050, delivering more than half of the capacity needed to reach EU climate neutrality according to the European Commission’s Strategy on Offshore Renewable Energy.

This will contribute to large-scale onshore and offshore production of green hydrogen. We have set combined targets of about 20 GW production capacity already by 2030 and look to expand our production even further for 2050.

All in all, this is a big deal, but it is still just the beginning. Synthetic fuels is a big part of utilizing the intermittency and at times excess energy supply from sun and wind. The North Sea is the perfect place for a grand project like this: Relative shallow waters, stable winds, a lot of space, and close shore proximity to 8 European countries that will benefit from the huge scale construction work.

However, a lot of challenges lies ahead in terms of expansion and control of the distributions grid and bureaucracy of permits, but Denmark has decades of experience in this regard, so if the many countries can agree on the targets, it is mostly a question of coordination of construction.

Photo of DR.dk TV news where the president of the European Commission was also present at the signing event.

Advertisement
Appreciate CleanTechnica’s originality? Consider becoming a CleanTechnica Member, Supporter, Technician, or Ambassador — or a patron on Patreon. Have a tip for CleanTechnica, want to advertise, or want to suggest a guest for our CleanTech Talk podcast? Contact us here.
Artigos Quentes
Artigos populares