The LinkedIn profiles of more than 70 former employees on the HoloLens team show they have left Microsoft in the past year. More than 40 joined Meta, formerly known as Facebook, which is making a big push into alternate-reality tech, the LinkedIn profiles show.

The departed staffers include some longtime leaders of the team.Charlie Han,who was responsible for taking customer feedback for HoloLens, left over the summer to join Meta.Josh Miller,who worked in the display team, became the display director at Meta in recent months. Mr. Han and Mr. Miller didn’t respond to requests for comment about the moves.

A Microsoft spokesman said the company has been at the forefront of innovation in metaverse technology for years and “will keep advancing state of the art hardware that is more immersive, affordable and in various form factors.”

The company declined to share details about the HoloLens team but said that employee attrition is a regular challenge many teams face and that Microsoft does what it can to retain employees and hire new ones when needed.

Top tech companies poaching from each other and from smaller companies is nothing new. What is notable now is the scale and speed as a big company like Meta tries to grow quickly, said Matt Stern, chief operating officer at Mira Labs Inc., a startup that helps organizations adopt augmented reality for their workplaces.

“It’s driven up prices in the market,” he said. “It’s difficult for smaller companies to compete.”

In October, Facebook changed its name to Meta and said it would be repositioning the company around the metaverse. It said spending on the new unit for the effort would dent its total operating profit by around $10 billion in its 2021 results. The company said it plans to hire many more employees to build out its metaverse products, including 10,000 workers in Europe over the next five years.

Microsoft isn’t the only company facing Meta’s growing appetite for talent.Apple Inc.AAPL 2.61%is also losing employees to Meta, according to former Microsoft employees who have moved to Meta and LinkedIn profiles of former Apple employees. Bloomberg previously reported on Apple’s attempts to limit departures. Apple declined to comment. 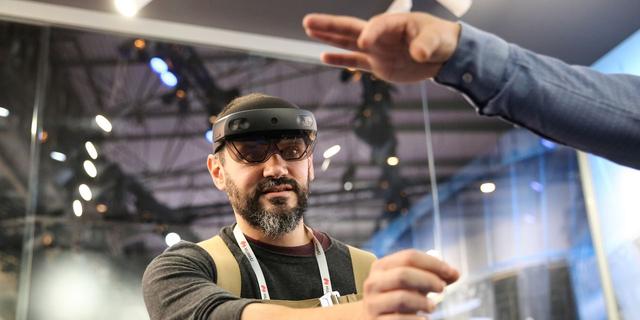 The metaverse is a largely unrealized virtual realm where proponents say people will work, play, learn and shop. Tech leaders like Microsoft, Meta and Apple are pouring billions into building the augmented- and virtual-reality hardware and software that could become the building blocks of this emerging digital world.

“‘Until someone else ships another AR product, Microsoft still has quite a bit of a head start in the AR space.’”

Virtual reality completely immerses users in a virtual world—a videogame for example—with a headset closed off from the real world. Meta’s Oculus dominates that headset market with around 75% share in 2021, according to research firm International Data Corp. There were 9.4 million VR headsets sold last year, a number that could rise to 13.6 million by the end of this year, according to IDC.

Augmented reality overlays digital content, such as 3-D images or visual instructions, onto a user’s view of the real world. Some in the tech industry see it as a bigger market opportunity than VR eventually but more difficult to develop. Only around 325,000 AR headsets were sold last year. That number could jump to 1.35 million units this year, according to IDC.

Most tech titans are now planning to release their own smart glasses, which are regular-size glasses that include some AR capabilities, so engineers with experience with AR and VR are seeing their profiles and salaries soar. The use of the term metaverse has skyrocketed in job listings. The share of job listings that mentioned the metaverse in December was more than 10 times the level a year earlier, according to the job site Indeed.

Microsoft was one of the first movers in augmented reality. HoloLens was first announced more than five years ago and has evolved into one of the world’s most advanced headsets. While it has focused on business applications, it is developing a lighter, more affordable version for consumers as well, though it is likely years away from hitting the market, said the former Microsoft employees.

Major news in the technology sector.

Meta is also working on AR glasses, prompting its hiring binge, said the former Microsoft employees. In September, it made an early step into the market with a pair of smart glasses in a partnership withEssilorLuxottica SA,maker of Ray-Ban glasses. For now, they include more basic functions such as taking pictures and short videos.

Because Microsoft has been ahead of the competition on AR, its employees make particularly attractive targets for headhunting, said analysts.

“Until someone else ships another AR product, Microsoft still has quite a bit of a head start in the AR space,” said Jitesh Ubrani, research manager at IDC.

Microsoft Chief ExecutiveSatya Nadellaannounced the first-generation HoloLens back in 2015. Rather than peddling its headset as a consumer platform for gaming and entertainment, Microsoft has focused on using it as a productivity tool for workplaces.

Microsoft has invested billions of dollars into developing the technology, but the HoloLens headsets, which cost $3,500 each, have sold little relative to popular consumer electronics.

Microsoft has shipped between 200,000 and 250,000 HoloLens units since launch, estimates IDC. Some senior leaders at Microsoft even considered reducing funding of the HoloLens program before the team won a big military contract, said people familiar with their thinking.

Last March, Microsoft won a U.S. Army contract to develop ways to use AR headsets to help soldiers see through smoke and navigate battlefields. The contract could be worth more than $20 billion over the next 10 years, said Microsoft.

Since then the company hasn’t hired enough engineers to handle the additional work, said the former employees. This made some staff question Microsoft’s commitment to developing the technology, making them more likely to accept offers from competitors, they said.

The army project ran into unexpected technical difficulties. For example, bringing high-quality, night-vision capabilities into the HoloLens proved difficult, said the former employees. The departures could now make it more difficult to address these kinds of challenges, they said.

Microsoft said it has a strong team and is making progress on the project.

Write to Aaron Tilley at aaron.tilley@wsj.com