Teachers have long known that most kids learn better when they are in a classroom with a teacher — and not on a computer — but the closure of schools during the coronavirus pandemic showed that to those who might have thought otherwise.

When the pandemic hit in spring 2020 and most students learned from home, school districts purchased Chromebooks and other devices, and kids learned by working on screens of varying sizes. But now that most schools have reopened five days a week, the technology is still in use — and some experts are concerned about its continued use among younger children.

This post, written by clinical psychologist Annalise Caron, explains why it is time to take technology out of elementary school.

Caron (@AnnaliseC_PhD) is director of CBT Westport, a private psychology practice in Westport, Conn., and is half of the Parenting Pair, an initiative dedicated to creating online parenting resources for science-informed, compassionate and connected parenting. She is also a mother of an eighth-grade son and a fifth-grade daughter, who are bringing their Chromebooks to and from school daily.

One afternoon last January, my fourth-grader returned home from her hybrid schooling to report she had a horrible day. She had forgotten her Chromebook at home and complained that the teacher made her read books to find the answers.

“It’s so much easier to look things up on Google,” she continued, “because you can find the answers right away.”

As a person who spent seven years in graduate school, the idea that books were the problem caused me panic symptoms, but her perspective made sense. Her grade school classroom had changed drastically from a year before, pre-covid-19. Unfortunately, Google was now the new normal.

In 2020, school districts’ responses to the pandemic and the resulting educational nightmare were beyond imagination. Schools closed and teachers were left to approximate school in cyberspace, as virtual learning was deemed safer for physical health. Technology was essential in conducting this educational experiment, and our kids’ brains were the petri dish.

Although far from perfect and with varying success — the herculean efforts of school districts allowed millions of kids to learn from home. Now the virtual and hybrid teaching models have mostly passed, yet the tech infrastructure persists in many grade schools. Why? 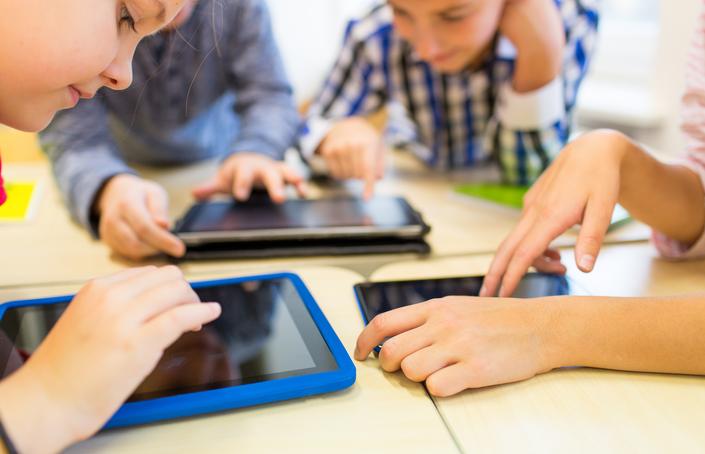 This was not by accident. Brain development and educational research suggestthat screens should be used judiciously at this age. The gold standard for elementary education has been to read, think and write first and use a computer later. Although computers were in the library or at the rear of the classroom, they were rarely a primary focus of the early years of education.

Our youngsters have lost an incredible amount of foundational instruction and are experiencing mental health concerns at rates double pre-pandemic levels, research shows. In this moment, we need to respond to children’s needs in school differently from the spring of 2020.

Many of the nation’s schoolchildren struggling with mental health

Many elementary schools transitioned back to full in-person learning this year, but the devices used for home-based learning often were not ditched. Chromebooks and iPads returned with the kids, changing the landscape of many elementary classrooms, and not for the better.

We need to remove the excess technology, particularly for our 2021 kids who are under-socialized and overstressed.

When a child sprains an ankle playing soccer, the orthopedist never says to put on a brace and go back to the game. They prescribe rest, ice, compression and elevation. Sprains left untreated can become unstable ankles, with pain, swelling and even arthritis.

Developing brains are not so different. Our kids’ brains need rest, social connection and learning recalibration after the past year and a half. The danger of increasing reliance on classroom learning individually with computers is that the rest and mental rejuvenation will not happen as fully and learning will suffer.

Though research on technology in elementary school has been equivocal, the literature broadly suggests that technology can be helpful sometimes when used adjunctively by talented teachers — but that heavy use of unnecessary technology can magnify socioeconomic disparities and lead to worse educational outcomes for all.

Pre-adolescents with computers on their desks tend to be more distracted and often fail to effectively attend to the teacher. They also go to other websites, play video games and message other students during class.

The impact of screen use on brain development is nuanced, but some findings indicate that devices cause young children to become overstimulated, lower their attention spans and have negative impacts on their reading comprehension. In 2019, the World Health Organization offered strict guidelines on screen use, noting that intensive use of digital media also decreases working memory and is associated with increased psychological problems.

At the core of the argument to remove individual student computer devices in grade school is the most basic skill — being able to delay gratification — which leads to better health and long-term outcomes overall. When we wait for rewards — like when we read a book to find an answer rather than searching Google — we learn that some unpleasantness can actually lead to the achievement of a goal.

Research has found that when participants in a study delayed their reward, the prefrontal cortex, the part of the brain involved in decision-making, planning, abstract thinking and emotion regulation, was active.

However, when participants chose immediate rewards, parts of their limbic system, which includes the fear- and reward-driven parts of the brain, were activated (McClure, et al., 2004). The result is that the more we allow our kids to struggle with activities that require effort and time (rather than the immediately gratifying dopamine rush from a computer), the more they will develop important executive functions mediated by the prefrontal cortex.

We must not forget the teachers. Elementary school teachers have experienced high stress over the past 18 months. Most completely reinvented their approach to teaching, while managing the stress of the pandemic and their own families at the same time. Teachers worked longer hours and enjoyed their jobs less — feeling overworked and underappreciated while having to teach themselves entirely new technological means to teach.

They returned to school this fall with a student body that not only has lost an incredible amount of instruction but also lacks developmentally appropriate levels of independence skills.

This year, our daughter’s teacher explained that the fifth-graders are less independent and need greater supports than previous years’ students just to get through the day. It makes sense, given that the last year these fifth-graders had a full year of in-person school was second grade. This is yet one more burden to which the teachers must adjust as the kids must play catch up. Why add computers, too?

How the pandemic is reshaping education

Do we still think that paper-based schoolwork is a covid-19 risk? If not, we should let our kids learn to write exclusively on paper and hone their reading skills with books that don’t emit blue light.

Let’s allow the teachers to do what they have always done — teach students who are looking at them, responding to them and moving around the room with them. This year, let kids build a one-to-one relationship with their teacher and not a computer.

Just a few weeks ago, my son’s middle school social studies teacher made an interesting request during a virtual open house. He asked that we encourage our kids to not just “Google everything” but to think deeply and consider multiple sources. He’s saying this about kids who finished elementary school before the pandemic began.

Imagine what he’s in store for when my daughter’s class enters the eighth grade.