Wireless is increasingly the norm when it comes to headphones. Even some laptop makers are ditching the headphone jack. (Looking at you, Dell – you monsters.) And, while Bluetooth certainly offers a lot of convenience, there’s one group of users who can’t really take advantage: music producers. See, the latency introduced by the newest generation of Bluetooth devices can be up to 40ms even under ideal conditions. And for older hardware, that can stretch well beyond 100ms. It’s not just the hardware that can pose a problem, either. Android for a long time was known to have serious latency issues over Bluetooth, though the situation has improved dramatically, at least according to Google. This makes it extremely difficult to keep things in time if you’re recording and all but unusable for live monitoring.

Then, in December of last year, AIAIAI introduced what it claims are the “world’s first wireless headphones for music creators,” the $350 TMA-2 Studio Wireless+. The key selling point is a special wireless transmitter that promises a consistent 16ms of latency. It’s not zero latency, but it’s close enough that wearing wireless headphones around the studio actually sounds reasonable.

Now, before we get to the wireless specifics, let’s talk about the TMA-2 Studio headphones more generally. Like the rest of AIAIAI’s lineup these are modular headphones that allow you to replace various parts as necessary, due to damage or changing needs. This also means you have to assemble them when they first show up. But, this is a pretty quick and easy process, even if it seems a tad intimidating at first. It took me less than 10 minutes from opening the box to having the headphones connected to my laptop. Basically, if you’ve ever put together a Lego set, then you can handle a pair of AIAIAIs.

The Studio headphones use the company’s “signature bio-diaphragm speaker,” and they sound great. They’re not the most neutral sounding headphones I’ve ever used, but they’re not terribly out of balance. I’ve found that the high frequency response is a little better, and the bass less emphatic on my Sony MDR-7506s. The AIAIAI are still perfectly suitable for mixing – just go in knowing that the tone errs towards the darker side. But the sound stage is very open and wide.

The two biggest complaints I have about the sound are relatively minor. As others have noted, there is a bit of noise introduced when using them in the 2.4Ghz low-latency mode with the transmitter. It’s a gentle static that you can start to hear with the volume at around 50 percent, but become more apparent over 75 percent. You can mostly mitigate this by changing the volume at the source instead of on the headphones themselves, but it’s worth being aware of.

The second issue is that the Studio Wireless+ are oddly quiet when you use them over Bluetooth. With my Jaybirds or Sonys, I usually set the volume on my phone to 75 or 80 percent. But even at 100 percent I still found myself wishing for just a touch more loudness on the AIAIAIs. A casual conversation isn’t going to overpower your music, but they might not provide the level of masking you’d want on a plane. 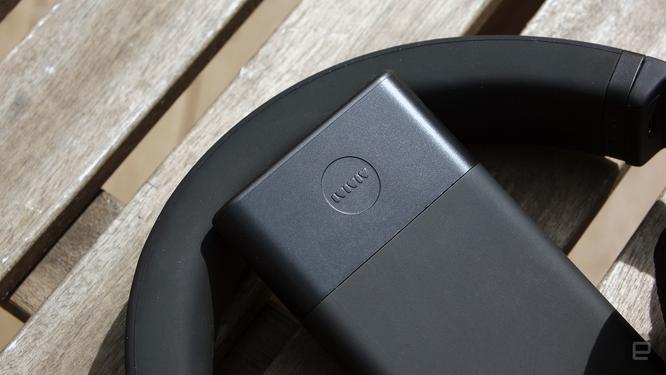 The Studio and Studio Wireless+ also come with cushy Alcantara covered earcups. I’ve worn them for hours on end with no issues. These are among the most comfortable headphones I’ve ever used. I had some mild concerns about the headband at first, which is all rubber and doesn’t have any obvious cushioning. But those proved unfounded, as there’s a gentle give around the inside of the band that delivers more than enough padding for marathon recording sessions.

There’s also more than enough battery life for marathon sessions, too. AIAIAI says the Wireless+ will last over 80 hours in Bluetooth mode. Frankly, I do not have the patience or the time to test this claim. I can tell you that I used them almost every day, in a mix of Bluetooth and low-latency modes for three weeks and still had juice left. I did, however, test the claim of 16-hour battery life specifically using 2.4GHz, and got 15 hours and 58 minutes. That’s shockingly close – and I was even able to eke out a bit more life by turning them back on in Bluetooth mode.

What was both stunning and confusing, though, was that despite getting the low battery beep when I powered them back on, both my MacBook and iPhone said there was 40 percent battery life left. I even took a 20-minute walk while listening to music, and the battery gauge didn’t budge. I was then able to sit at my laptop for almost a full hour, playing back the occasional video and listening to music before the headphones completely died and wouldn’t power back on. But, even right up until the end macOS insisted there was 40 percent left, so something is amiss. I've asked AIAIAI if they have any theories about why this might be and will update this review if and when I hear back.

Oh, and even once you’ve completely exhausted the battery, you can always connect the headphones to your audio source of choice using a regular old TRS cable.

Of course, the real reason to buy the AIAIAI Studio Wireless+ isn’t for the epic battery life, it’s for the special low-latency mode and let me tell you: It delivers. Now, this isn’t zero latency. You can detect it under very specific circumstances, but it’s not enough to make a difference. I recorded live using my laptop and a MIDI controller, and practiced my finger drumming on the SP-404 and had no issues.

The only time I noticed the miniscule 16ms of lag was when monitoring live while recording in the same room as my guitar amp. Being able to hear the amp over the feed from the headphones almost made it sound like my guitar was double tracked. But the effect wasn’t pronounced enough to give me any trouble.

I don’t think I was prepared for how freeing this was, though. Although yes, taking headphones on and off, or dragging around the long, heavy, coiled cable of my MDR-7506s around is a pain, my “studio” is extremely small. It’s the front third of a finished attic, and it does triple duty as my office and our guest bedroom. So, there’s not a lot of space to maneuver and it’s kinda cluttered.

Still, being able to pick up my guitar, without first taking off my headphones or worrying about keeping the cable out of the way was great. And walking back and forth to swap out a pedal on my board, or a drum machine on my desk without thinking, made experimentation that much easier. So much of any creative endeavor is about getting into a flow state and staying there. Even the tiniest hurdle can disrupt that, and the AIAIAI Studio Wireless+ removes one of those hurdles.

This freedom to move about would probably be even better appreciated by people with larger, more well equipped studios. The range on the 2.4GHz transmitter is pretty solid, too. I was able to walk from my attic all the way to the ground floor before I started to lose connection.

Now, the question is whether that convenience is worth the $350. And I’d say, for me at least, the answer is yes. Even though I tend to build my studio on a budget (after all: I’m not a professional musician, life in New York is expensive and I have two kids), this seems like an indulgence worth making. If you’re the type who produces music entirely in the box (on a computer using software instruments only), the appeal might not be as strong. But being able to mill about, untethered, and record, while also avoiding waking up my family in the middle of the night, is a godsend.