Carlos Rivas-Valencia, a senior in the Bachelor of Science in Computer Science program in the University of Alabama at Birmingham’s Department of Computer ScienceEveryone knows that a computer science degree is a ticket to a bright future. The researchers at the U.S. Bureau of Labor Statistics make the numerical argument: They note that software development, one common computer science career option, has a current median national pay of $110,140. And the BLS foresees 22% growth in openings — more than 400,000 new jobs — through 2030.

Carlos Rivas-Valencia, a senior in the Bachelor of Science in Computer Science program in the University of Alabama at Birmingham’s Department of Computer Science, sums up the appeal in terms of possibility.

“It opens so many doors and opportunities,” he said. “I can dive into medicine, business, education or any other sector and go from building computer programs that help doctors better diagnose patients to working on the new self-driving cars.”

Rivas-Valencia is interested in becoming a software engineer. Even before he graduates, he will have completed internships at two big-name companies. Last summer, he had a software engineering role at Khan Academy, the open-education company, working alongside full-time engineers on the Frontend Infrastructure team, where he built new user-interface components, fixed bugs and wrote documentation on his changes.

This summer, he will again be working as a software engineer at the San Francisco offices of Lyft — one of several companies that has made a major investment in self-driving cars.

But not everyone starts out knowing they might be interested in a future in computer science. Amalee Dianne Wilson, a two-time UAB computer science grad (B.S. 2016, M.S. 2018) now pursuing her Ph.D. in the heart of Silicon Valley at Stanford University, started off in that group.

“A lot of people in computer science started programming when they were in their teens, but I was an adult-onset programmer,” Wilson said. “I was studying biochemistry and wanted to go to med school; but after my experiences in the emergency department, I realized that medicine wasn’t for me. I ended up taking a programming class, almost by accident, and was hooked. It was the most fun, challenging and interesting class that I had ever taken.”

You will hear similar adjectives from many computer science students and alumni.

“I like problem-solving and optimizing, and you get that a lot in this field,” said Sonia Grzywocz, who graduated from UAB’s Bachelor of Arts in Computer Science program in 2021 and now works as a full-stack software engineer for fintech/cybersecurity company NXTsoft in Birmingham. “I wanted something that would challenge me from the beginning and for the rest of my career.”

Chris Rocco, a 2019 graduate of the B.A. program, started out as an intern and then a full-time employee at Google and now works for YouTube, a Google subsidiary. Rocco has known that he was interested in software engineering since his early teens, and even considered a coding bootcamp program instead of getting a university degree.

“But it’s always better to have a college degree,” he reasoned. “And it’s good to be around other people interested in the same thing.” 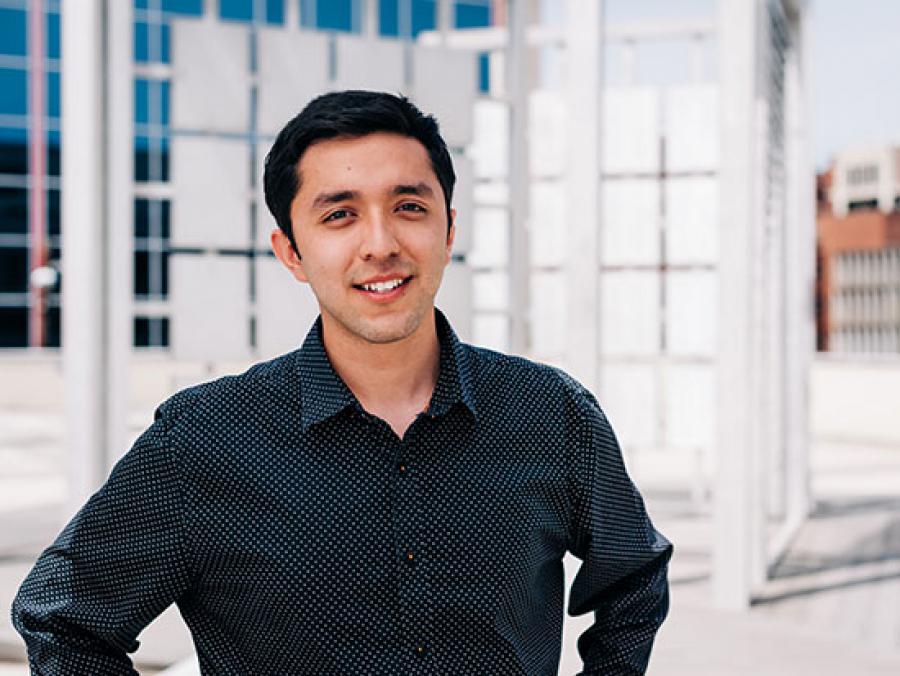 In the most recently available data, based on the First Destination survey of recent graduates, “97 percent of our undergraduates have a job within six months of graduation — basically full employment — and I believe that is the highest rate at UAB,” Zheng said. Most of these students work at Alabama companies, Zheng adds, although as the graduates above demonstrate, they can compete for positions at the country’s elite companies and institutions as well.

UAB Department of Computer Science Chair, Yuliang Zheng, Ph.D.Of course, the same hot job market for students applies to faculty, who could make far more money in the private sector. “Our faculty are top-notch educators and leaders in their fields, and their efforts in particular over the past years as enrollment has grown are remarkable,” Zheng said. But to keep up with enrollment, the faculty needs to expand, Zheng points out, and the department recently celebrated a landmark in this regard — its first endowed faculty position.

A gift from alumnus David Brasfield (B.S. 1984), founder of NXTsoft, and his wife, Phyllis, has created the Phyllis and David Brasfield Endowed Faculty Scholarship in Computer Science. Endowed positions are common in medical schools, where recruitment has long been fierce, and the competition is heating up in computer science departments as well, Zheng notes.

“Endowed positions give us an edge when recruiting new faculty, and this gift is an important step forward as faculty are in high demand nationwide,” Zheng said.

“Programming is becoming a new literacy”

An academic career has many kinds of rewards, says John Johnstone, Ph.D., associate professor in the Department of Computer Science who was regularly cited by the alumni in this story as a standout educator.

“Perhaps the main reason I am drawn to teaching is the opportunity it offers to immerse yourself in a subject and to understand it deeply,” Johnstone said. “It is indeed true that, to understand something, you should teach it. Teaching is also about trying to light the spark in someone else by clearly showing the beauty of a subject — and I always see a lot of beauty in the topics I teach.”

The combination of intellectual stimulation and the prospect of financial remuneration is a powerful attractor for students.

“That is one of the unique things computer science offers — with a lot of four-year degrees, you don’t necessarily have any guarantees that you will be able to support yourself; but computer science is lucrative,” Wilson said. It is also ubiquitous. “Programming is becoming a new literacy. My colleagues who do research in biology, neuroscience and chemistry all use Python [a popular programming language] on a regular basis. Programming experience is a huge resume-booster across disciplines, and it’s arguably crucial for doing research in most scientific fields. Enrollment is booming because people understand these benefits of a computer science degree.”

The B.S. degree still has the highest enrollment in the department; but the B.A. degree, launched in 2016, is gaining quickly. The B.A. program was designed to allow students to combine a broad-based liberal arts education with a strong foundation in computer science, so that they become so-called T-shaped professionals. Students in the B.A. program must complete a minor to give them significant exposure to a second discipline.

Related story: The four Frees brothers, all dual bachelor’s/master’s graduates of the Department of Computer Science between 2008 and 2021, illustrate the job options available to computer science graduates in Alabama.

Rocco chose to minor in mathematics, both “because it is incredibly interesting by itself but also because it supplements computer science very well,” he said. Grzywocz minored in social media strategies. “I figured it would give me a better understanding of the target audience and how to make a product desirable,” she said. “I have already seen that benefiting me at work.” Both alumni say they were attracted to the B.A. program because of its flexibility.

“There are a lot of different careers out there, and the B.A. allows you to tailor your studies to fit your goals and aspirations,” Grzywocz said.

“I appreciate being well-rounded and not having to take courses that are just related to your major,” Rocco said.

One of the ways Rocco spent his time while at UAB was as part of the university’s Student Accelerator program, where he received funding and support to launch his own web development company. That experience gave him “a lot of the necessary ingredients in developing a professional skillset,” such as “learning to network and meeting new people who are also ambitious,” Rocco said. “And however you do it, if you start your own business, you are going to learn a lot no matter what happens. Fulfilling contracts with real companies is invaluable experience.”

Wilson’s doctoral research at Stanford is focused on algorithms for parallel SMT solving (a type of automated reasoning), but she did not start out with an interest in an academic career. “I started doing research as an undergrad because I thought it would make my resume look good when I started applying for software engineering jobs,” Wilson said. But as she began working on compilers for high-performance computing with faculty Puri Bangalore, Ph.D., and Peter Pirkelbauer, Ph.D., the intellectual interest and challenge drew her in. After finishing her master’s degree at UAB, she took a research position at Los Alamos National Laboratory in New Mexico and now has a Department of Energy Computer Science Graduate Fellowship to help fund her doctoral studies.

Her choice of Stanford University for her Ph.D. was strategic, Wilson adds. “I want to start a company,” she said. “The Bay Area is the best place for that.