Historic Hangar One Getting Google-Funded Makeover

After years of discussion, Hangar One, the airship hangar at Moffett Federal Airfield (KNUQ), is being restored.

The behemoth building, standing at 200 feet high and 1,133 feet long, is the largest in Santa Clara County and one of the largest freestanding buildings in the world. It was constructed in 1933 to house the USS Macon, a 146-foot tall, 785-foot-long dirigible operated by the U.S. Navy, and was designed with doors on either end that could be drawn back on rails, allowing an aircraft to enter or exit from either direction.

It is so large that it has its own microclimate and it is not uncommon for clouds to form at its ceiling.

Today, the airport is a joint military-civilian airport and the home of NASA Ames Research and Google Planetary Ventures.

Hangar One dominates the airport that lies on the south end of the San Francisco Bay. It has two parallel runways: Runway 14L/32R measuring 9197 feet by 200 feet and Runway 14R/32L measuring 8,122 feet by 200 feet. The U.S. Navy operated the base until 1994, then turned it over to NASA, which in 2015 leased it to Google Planetary Ventures. The facility is bordered by wetlands to the north and east. In addition to Hangar One, the base has two smaller hangars that were used to house K-ships, the non-rigid airships used when the base was home to the Navy’s anti-submarine light-than-air program.

Today, the airport is used by government and corporate aircraft, and prior permission is required to land.

For nearly a decade, Hangar One has been nothing more than a skeleton because of the environmental hazards created by the structure’s original construction. Hangar One was built at a time when very little was known about toxic materials, and so the building contained lead, PCBs, and asbestos. By the 1980s, the Environmental Protection Agency (EPA) determined that Moffett Field was contaminated with hazardous materials, and the communities in the south bay became more aware of pollution emanating from the base after decades of operation.

“In 2003 NASA, which received most of Moffett from the Navy after base closure in 1994, discovered that PCBs from Hangar One were polluting the Moffett wetlands,” says Lenny Siegel, the executive director of the Center for Public Environmental Oversight. Siegal has been involved in the cleanup of Moffett Field since 1991, first as a member of the Technical Review Committee and then as a member of the Restoration Advisory Board (RAB). “As a result, the Navy coated the hangar, but that didn’t last. In 2005, the Navy told the Restoration Advisory Board that it wanted to demolish the hangar.” 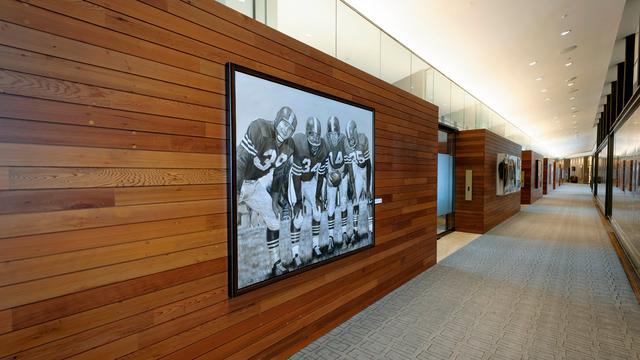 “Hangar One is irreplaceable,” he said. “It is a highly visible landmark treasured by local residents, and veterans see it as a symbol of their service to our country. Hangar One, with historically significant architecture, is one of the world’s largest freestanding buildings, an emblem of lighter-than-air technology, and a symbol of the early days of Silicon Valley. “

Siegel founded the Save Hangar One Committee, an organization he says is made up of RAB members, navy veterans, and preservationists. They quickly mounted an effort to protect the iconic building.

“Hundreds of people showed up at meetings. Thousands signed petitions. As a result, the Navy agreed to skin the hangar, leaving the skeleton, but not to restore it.” he recalls, adding that for the better part of a decade the metal structure resembling a giant birdcage loomed over the landscape as the committee tried to persuade the navy and NASA to reskin the hangar. Both groups declined.

It wasn’t until a Congressional delegation stepped in—led by Rep. Anna Eshoo of the 19th District of California—that NASA agreed to offer 1,000 acres of Moffett, including the three dirigible hangars, for competitive lease to Google Planetary Ventures.

Google entered a $1.6 billion, 60-year lease with NASA to formally take over the facility, ostensibly with plans to repurpose all three airship hangars on site—including Hangar One—which meant restoration of some fashion would likely happen.

What Google plans to do with the space is still not clear, and FLYING‘s efforts to reach Google PV and NASA regarding the subject were unsuccessful.

However, according to a statement released by Eshoo, per NASA, Planetary Ventures “plans to replicate the original visual characteristics of Hangar One as closely as possible. The initial phase will include structural upgrades and re-coating, which is expected to take two years. Under the lease agreement, Planetary Ventures will identify and mitigate environmental impacts accordingly. NASA Ames will also be monitoring the construction for compliance with the plans and permits.”

In 1930, the U.S. Navy was developing its aviation program and looking for places to establish bases for all of its aircraft. The citizens of Sunnyvale raised $480,000 to buy 1,000 acres. At the time, Santa Clara County was mostly farmland and fruit orchards, as the computer tech industry was still decades away. The property was sold to the U.S. government for $1 in order to become a home for the Navy’s USS Macon, one of the service’s helium-filled airships, and the sister ship to the USS Akron.

At the time, the Navy was trying to develop a fleet of airships for surveillance and patrol duties, although the airships had a checkered reputation at the time. Since their introduction during World War I, there have been some spectacular accidents. The USS Shenandoah, for example, was destroyed when it was caught in a thunderstorm in Ohio.

For this reason, the location of the property was listed as being in Sunnyvale although substantially more acreage was in the city of Mountain View—the latter fact was downplayed because the developers of the base didn’t want people to think about airships potentially crashing into mountains, although mountains sit several miles from the base.

The base was originally named Airbase Sunnyvale CAL, and the name was later changed to Moffett Field in honor of Rear Admiral William A. Moffett, regarded by many as the father of naval aviation and a proponent of airships. Moffett was killed in April 1933 when the USS Akron crashed in a storm off the coast of New Jersey. Naval Air Station (NAS) Sunnyvale became Moffett Field in September of 1933.

Hangar One’s south door, the one facing the freeway, was often open while the north facing door kept closed to protect aircraft—mostly P-3C Orions, NASA Convairs and a smattering of helicopters—from the weather coming off the bay.

It looks like a little sliver of me has flown off.

I can’t spare any more. https://t.co/3glGv7RsWP

Historians note the restoration scaffolding appeared on the site the week of May 6, 2022, the 75th anniversary of the destruction of the Hindenburg at Lakehurst New Jersey. The Hindenburg, filled with highly flammable hydrogen, was destroyed by fire.